Four shows featuring music, comedy, storytelling, drag and more have been recorded at Anvil Centre Theatre and will stream live on demand from May 21 to 24
May 15, 2021 6:05 PM By: Julie MacLellan 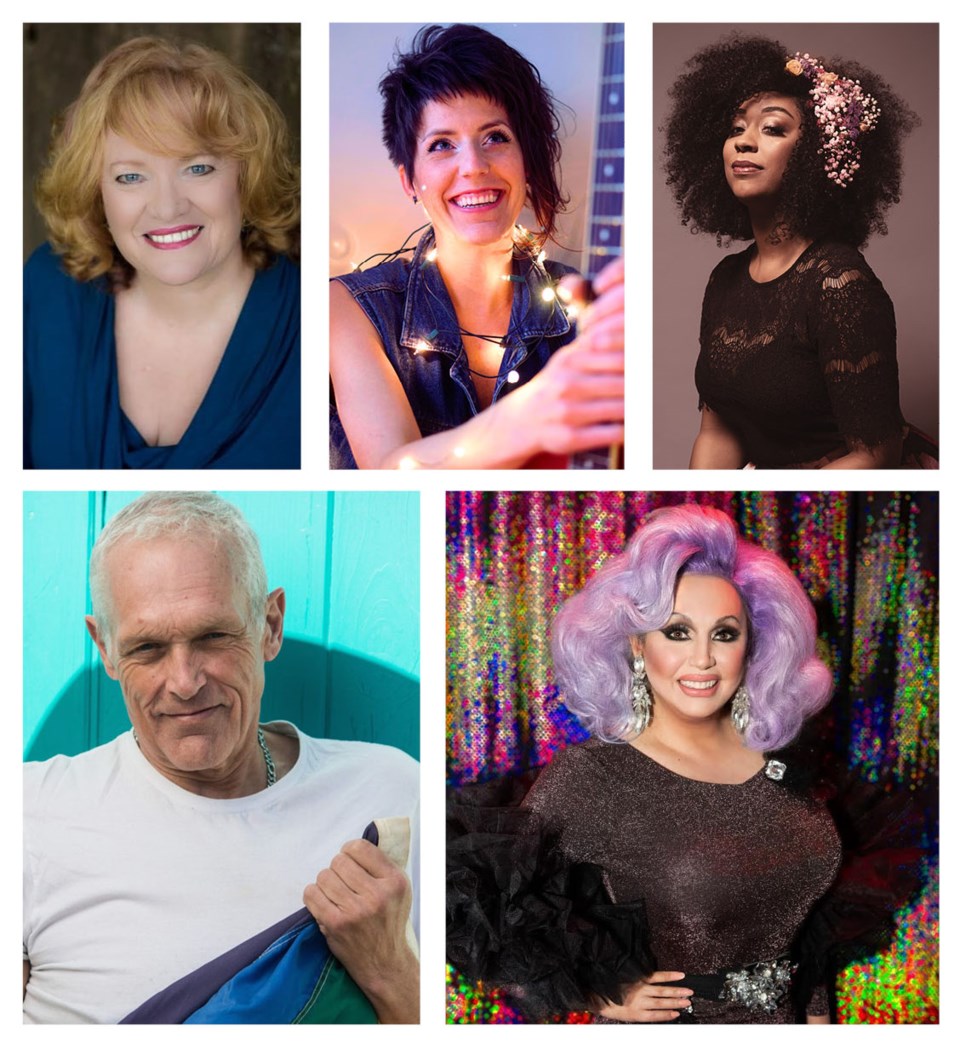 The performers in the Anvil Centre’s May Long Festival have faced more than their fair share of challenges over 2020 and 2021.

But, in the face of COVID-19, each of them has also managed to find some light: new ways to perform, new audiences to connect with, new ways to tap into what it means to be an artist – and a human being.

The performers, who are all from or affiliated with New Westminster, have recorded individual shows at the Anvil Centre Theatre, with its newly installed recording equipment.

Come the May long weekend, those shows will be beaming live into living rooms around the city and beyond, with on-demand viewing online between May 21 and 24.

Leading up to the event, the Record talked to three of the artists about their journeys over the past 14 months, what audiences can expect from the shows, and where life goes from here.

Here’s a glimpse of what they had to say.

JANICE BANNISTER: The Weirdest Year of My Life

Janice Bannister has become somewhat of an expert at finding silver linings.

Her career as a standup comic and a laughter wellness teacher has seen to that.

But even Bannister has to admit that 2020 had its challenges.

One after another, she lost the comedy shows she had booked to bring to the stage in the spring. Then there was that brief moment in October where live performance was allowed for limited audiences, and she managed to get one of her standup comedy classes onstage for a showcase at the House of Comedy in downtown New West – before everything went dark again in November.

There’ve been no comedy nights, no open mics for trying out new material, no chance to just be in a room with other people and make them laugh.

“We don’t get that boisterous laughter coming through the screen as we do in a live show,” Bannister says. “Audiences create their own momentum, too. If somebody else is laughing hysterically, that creates more laughter. It creates momentum.”

But the online world has also brought some unexpected benefits – not the least of which is the way it has opened up Bannister’s work to an entirely new audience.

“One of the things I have learned is Zoom or streaming or any of those forums opens up, in my case, comedy to a whole bigger audience,” she says.

She first found that out in April last year, when a variety show she was supposed to perform in at the Legion pivoted to an online format. She admits she was skeptical at first.

“I got people who said to me, ‘I loved the show. I never would have gone to the Legion,’ or ‘I’ve never been to a comedy club,’” she recalls. “I thought, wow, that is just the thing I hadn’t built into all the losses. We have tapped into a whole new demographic of audience that can participate in online shows.”

Bannister is looking forward to entertaining an even broader online audience with her new show, The Weirdest Year of My Life. It will combine storytelling and stand-up, taking audiences on a journey from Bannister’s years growing up in the Kootenay town of Trail, through her days as a psychiatric nurse at Riverview. Along the way, it will touch on all the things she’d intended to do over the past year – incorporating new highlights such as material from an International Women’s Day show that was cancelled by COVID-19.

“I’ve taken all the shows that I’ve missed and put it in one,” she says.

Admittedly, Bannister wasn’t entirely looking forward to recording the show in a virtually empty theatre, with just a technician or two as audience.

“I think I’d rather stand on my curb right now and do a comedy show than go and face those empty red seats at the Anvil,” she says with a laugh. “It’s just so much more fun to be out there and hear laughter and to make people laugh.”

But she’s embracing the chance to share laughter with an audience that needs it – especially right now.

“I think people are getting to that point now where it’s kinda like, let’s just go forward. Let’s just take the good and deal with whatever is coming,” she says. “I know how much we all need laughter, so that’s important.”

If you ever attended a Way Off-Broadway Wednesday night at the Heritage Grill, then you’ll know Devon More already.

If you didn’t, then you can make up for lost time during her May Long Festival show.

The show is a greatest hits compilation of sorts, featuring music and musings from a variety of her shows out of the two-and-a-half years she spent performing in the Columbia Street establishment’s small backroom.

“This is for the people who came out to see me at Way Off-Broadway Wednesdays for all of those years. We sat in a space where the furthest seat from the stage was probably about two metres. We shared air and ideas, and it was really a wonderful time. Thinking back on all that new work of mine that wouldn’t have come to life the way it did had I not had an opportunity to workshop it there,” she says.

In some ways, More says, the pandemic changed everything for her as a performer – but, in other ways, things have stayed remarkably the same.

“I’ve sort of taken that workshop, speakeasy vibe that I had at my Way Off-Broadway Wednesdays, and I’ve moved it online to a virtual venue,” she explains.

She has a Patreon page now, where subscribers (on a pay-what-you-want basis) can access a podcast and livestream shows. She’s just been taking part in an online festival with Kamloops’ Western Canada Theatre. She even had a chance to work with some of Canadian musical theatre’s “heaviest hitters,” courtesy of Musical TheatreWorks’ Lady Macbeth and the Not Quite Dead – a group show dedicated to female characters who get killed off in Shakespeare.

“I’m quite inspired by the way creative communities and artists and venues and presenters and organizations have really found ways to continue to create good work and share it,” she says. “Wow, what an insane amount of growth everyone is going through.”

More was already trying to expand her presence in the online sphere before the pandemic, she says, and she’s grateful she didn’t have to make that shift entirely under duress. But COVID-19 has definitely forced her to up her game in terms of technological skills.

“At this point, 13 or 14 months into this altered gig economy, we’ve learned a lot. I have a lot of new skills, even if they weren’t necessarily skills I would have chosen to develop,” she says.

She admits there’s also been a certain freedom that comes along with leaving behind the constant hustle to book gigs. Not having to continually load gear and head off to yet another venue, More has had more time to just focus on her craft – like her own artist-in-residency, as she puts it.

Looking ahead, More sees a bright future for the world of hybrid events, with live performances and livestreams co-existing in one space and allowing local performers in communities across the country to reach previously unreachable audiences.

But she can’t wait for the day when she can take to the stage again for a live, in-house audience.

“There is really something magical about being in a shared space and going through the shared emotional experience of a live show together. It kinds of puts us in sync and in alignment together,” she says, and she hopes audiences are as eager to return to live performance as she is.

“My biggest hope, and I’m sure New West will be a community that does this, is that there’s a renewed thirst for live events.”

With Allan Morgan and Friends: Reflections

“Every event should have a drag presence, don’t you think?”

Jaylene Tyme laughs a little as she speaks, but there’s a deep sincerity behind the light-heartedness.

For the May Long Festival, she’ll be sharing the spotlight with actor Allan Morgan, as the two host a conversational performance featuring laughter, song and stories from the Massey Theatre’s LGBTQ+ seniors storytelling group – with a little fierce drag thrown in for good measure.

“As artists, we work with so many different mediums. When we come together, we just complement each other,” Jaylene says. “I think that it’s really important to come together as community, especially in the middle of a pandemic.”

Jaylene has been doing drag since 1992; a crowning moment was being named Empress 35 of Vancouver in 2006. The tradition of drag artistry has helped her on her personal journey as an Indigenous, two-spirit, trans person – and it’s anchored her on the road to becoming sober, as she’s been for 22 years.

The pandemic, of course, brought a halt to live performance.

But Jaylene took the energy she usually directs to the stage and channelled it into the virtual world. She’s been hosting a talk show every Sunday, sharing conversations with invited guests from around the world, and she has also recorded video performances.

“I connect where I can,” she says. “Right now, I know the whole world is experiencing that, too.”

At the same time, Jaylene notes, the pandemic has given her a chance to slow down and take stock of her existence, studying aspects of her own life and how she can contribute to the community in different ways.

With her 50th birthday this year, it has, in many ways, been a year of awareness and awakenings.

“I just realize that my whole life experience is pretty exciting, because I can understand it now, going back and being able to put my life experience in perspective,” she says. “That awareness that all of our stories are sacred.”

Having a chance to work on the May Long Festival with Morgan – “who is all heart,” she says – is an opportunity she’s grateful for, and she hopes their show will offer hope for those who need it.

“If you’ve been having a hard time, and you love the arts, and you want to feel the connection to the beauty of what that represents, then come and watch,” she says.

“It’s about lifting spirits and saying, I don’t know what everybody’s going through, but I can only imagine. … If I can actually bring some smiles to faces through this time? Then what an honour.”