School buses not in the cards for New Westminster students

School district says it's 'vigorously following up' on a provincial election promise to provide free public transit for Queensborough students to NWSS
May 14, 2021 9:24 AM By: Julie MacLellan 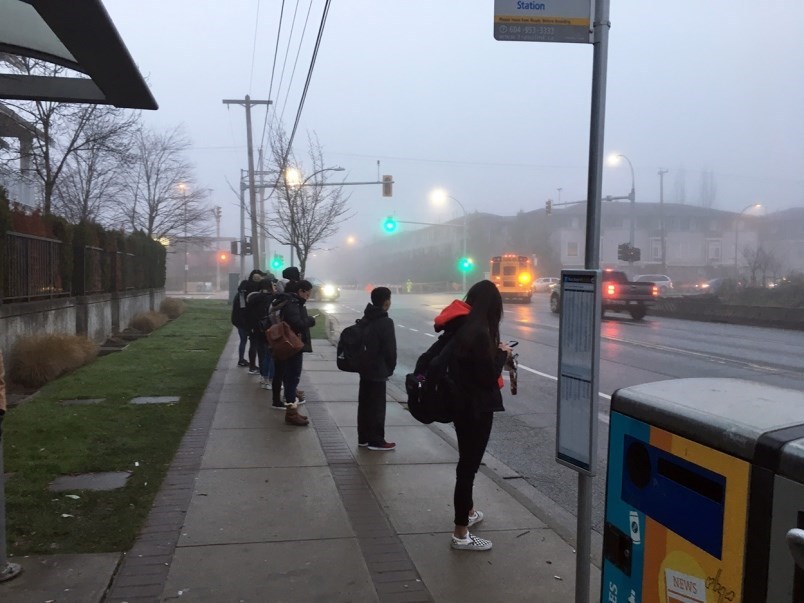 School buses are not in the cards for New Westminster students.

The issue arose during the New Westminster school board’s May 11 operations committee meeting, when the grandmother of a Fraser River Middle School student came forward to ask trustees if school buses could be provided in next year’s budget.

Teresa Watson said she’s worried about the safety of the students who have to make their way from the area of Lord Tweedsmuir and Connaught Heights elementary schools. Those students, she said, used to have a short walk to their elementary schools but now have a much longer route to Fraser River Middle School.

(A Google map search shows Connaught Heights is 3.5 km or more from FRMS, depending on the route walked, while Tweedsmuir is about 2.5 km away.)

Watson noted her granddaughter and a friend decided to do a trial run on the city bus with an adult. When the bus arrived on Eighth Avenue, it was full and left the girls at the stop.

“As a grandmother I’m visualizing my 10-year-old granddaughter standing on Eighth Ave waiting for the next bus, which may or may not pick them up,” Watson said.

“In my estimation, the first thought should have been safety for the distance they’re going to have to go,” she said.

NO FUNDING FOR TRANSPORTATION

Superintendent Karim Hachlaf said the issue of transport to the middle school was raised only once in the school district’s recent budget survey; parents’ transportation concerns tended to revolve around Queensborough.

But he noted that New Westminster doesn’t receive any funding from the province for transportation.

“It becomes very difficult for us to operationalize a bus,” he said.

Secretary-treasurer Bettina Ketcham explained that, while school districts don’t get funding specifically for buses, that money is included in a supplement for “unique geographic factors.” Larger rural districts will get larger supplements in that category, she said, while New Westminster – because of its size and central location – gets a small amount.

“The supports necessary for school transportation are quite substantial in terms of infrastructure,” she said, pointing out that running buses comes with a significant number of costs for not just the vehicles but for maintenance, operations, fuel and employment of drivers. “To create the infrastructure for busing is actually quite intensive and quite substantial for budget allocations.”

‘VIGOROUSLY FOLLOWING UP’ ON QUEENSBOROUGH BUSING

On the related issue of busing for Queensborough students – particularly those who currently have to rely on public transit or get driven by parents to New Westminster Secondary School – Ketcham said the district is currently working with provincial government officials.

“This is the only situation in Metro Vancouver where you have students separated from their high school by a bridge and a complicated bus schedule,” Singh said in a press release at the time. “For students in high school, the last thing they should be worried about is making their bus connections on time so they don’t add to their already two-hour daily commute.

“This will cut students’ commute time in half and take pressure off parents who either have to drive their kids or pay out-of-pocket for regular bus service.”

Ketcham told trustees at the May 11 meeting that the district has not yet received details on how, or if, that plan will be enacted.

“The district is working with government officials to understand how that will play out. We have no resolution at this time, but we are vigorously following up on the matter,” she said. “Please do know that we have heard the concerns. We are trying to address them.”