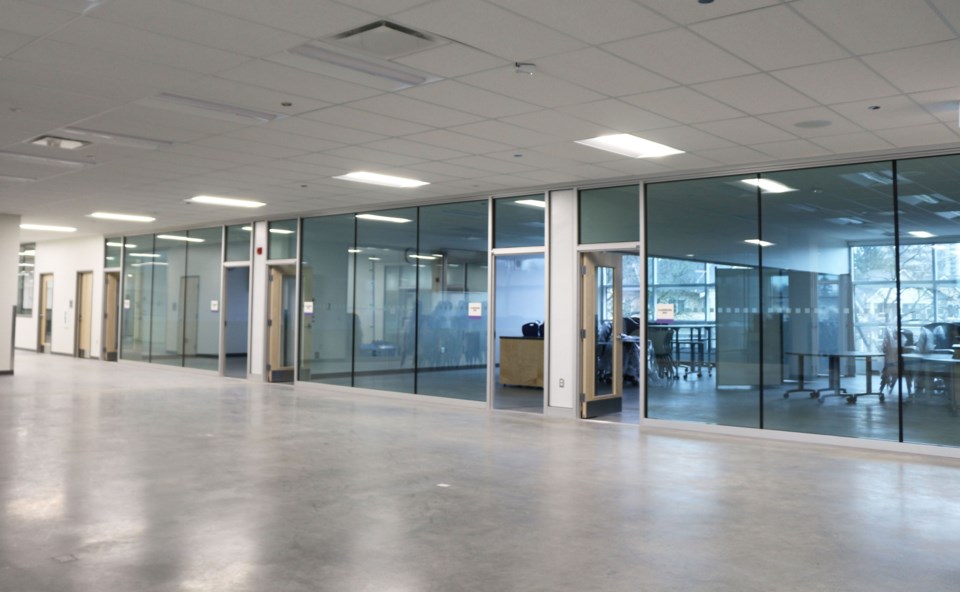 Glass-walled classrooms around 'learning commons' spaces (seen here in December, before students moved in to the building) are part of the design of the new NWSS. But teachers and students say glass walls in the new secondary school are causing problems.Julie MacLellan

A modern school built with glass walls may be filled with light – but it’s also lacking in privacy.

New Westminster Secondary School teachers and students would like to see something done about all the glass walls in the new high school, which just opened in January.

Both the New Westminster Teachers’ Union and the NWSS Student Voice group raised the issue as part of their 2021/22 budget submissions to the school district, presented at the April 27 board meeting.

Sarah Wethered, president of the NWTU, said privacy coverings are on teachers’ wish list for the next school year.

“There is a lack of privacy at NWSS, especially in teacher prep rooms and classrooms. While some offices have been given blinds, not all have,” she said.

Wethered suggested glass in prep rooms and classrooms should be frosted.

“The lack of privacy in classrooms disrupts student learning and, as a result, makes it more difficult for teachers to engage in learning in a meaningful way, free from distraction,” she said.

Katharine Galloway, speaking for the high school’s Student Voice group, said the issue arose during a recent student symposium in a discussion around mental health.

“There was a lot of students who had anxiety about the glass at our new school because they didn’t feel as though they had enough privacy,” she said. “Also there’s glass in the counselling office, and they felt that when you’re talking to your counsellor, you want it to be private, and your peers are walking by and kind of seeing you in an in-depth, personal conversation. It’s not very welcoming.”

The presentations were part of the school district’s ongoing work on its 2021/22 budget. Trustees also heard from the district parent advisory council, CUPE Local 409 (which represents school support staff) and the New Westminster principals and vice-principals group.

Superintendent Karim Hachlaf will be bringing budget recommendations to the board at its May 11 committee meeting, and the budget is expected to be passed at the May 25 school board meeting.