Tower grows in height and switches from strata to rental units
Dec 10, 2020 9:35 AM By: Theresa McManus 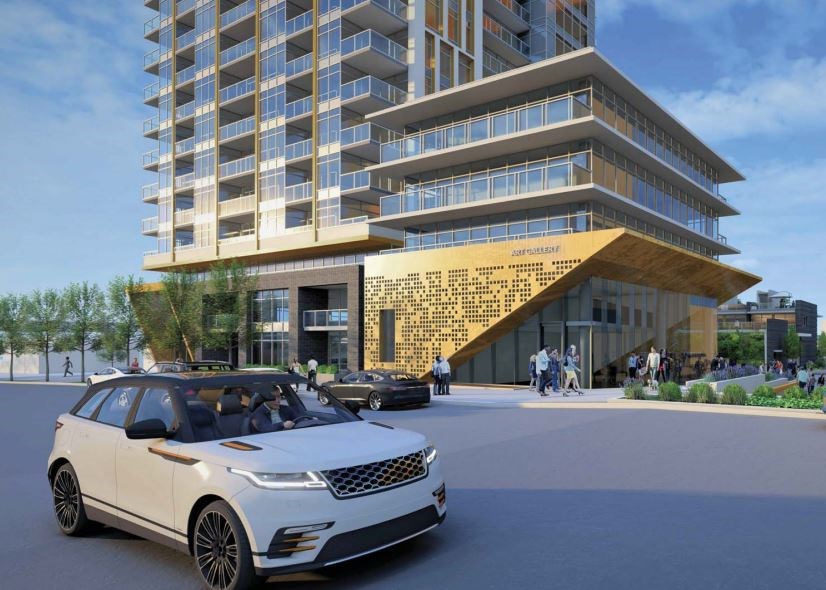 Wesgroup is hoping to build a 34-storey rental building, which includes 423 units - including 96 that are at less-than-market rates - at 100 Braid St. Contributed

Wesgroup Properties has received the green light to build a 34-storey tower in Sapperton – provided it contains rental units.

Wesgroup had planned to build a 21-storey strata highrise at 100 Braid St. but subsequently applied to the city for a zoning bylaw text amendment. In exchange for changing the building to market rental housing, and possibly providing some units at “less-than-market rates” if it receives funding through the Canada  Mortgage and Housing Corporation, Wesgroup will increase the residential density on the site, increase the maximum building height from 65 metres (213.25 feet) to 118 metres (390.42 feet) and decrease the off-street parking requirements.

“This would amount to a project with 423 rental units, which would also include family-friendly units, which, for a rental project, 25% of units would need to be two- and three-bedroom units,” said Rupinder Basi, the city’s development planning supervisor. “Ninety-six of the units would be provided at less-than-market rates for a period of 16 years.”

When considering a preliminary report about the project earlier this year, council was told that 96 units would have rents that are 70% of the “household median income” for 10 years, at which time they would then revert to secured market rental. Council then directed staff to work with the developer on extending the below-market component for a longer period of time.

According to Basi, staff consider the additional height to be reasonable given that the project is consistent with the city’s secured market rental housing policy, which allows the city to consider additional height in exchange for secured rental units.

Basi said Wesgroup’s plan to build a rental project is contingent on receiving funding from the Canada Mortgage and Housing Corporation’s rental construction financing incentive program.  If the developer is unable to secure that funding, he said the project would revert back to strata market condos.

“I am a strong believer that we need more rental housing in New West and across all of Metro Vancouver,” said area resident Bri Pigeau. “Anything that is purpose-built rental is already a win in my books.”

Wilson Street resident Gaga Sivia said traffic is an ongoing issue in the neighbourhood, but Wesgroup has created a working team to help address any traffic issues that may arise.

“There are longstanding issues,” she said. “Not everything can be resolved, but at least we can work together.”

A Fader Street resident, the lone delegation to speak against the project, said she doesn’t think a 34-storey building fits in with the adjacent single-family neighbourhood. She said many of her neighbours signed a petition asking the city to reject the application but felt they had “no hope” of convincing council to halt the project because of its “agenda” around social housing.

“I am against, and I know I am not the only one,” she said of the tower.

Coun. Chuck Puchmayr was comfortable supporting the project, saying the increased density is linked to the provision of below-market housing units.  He said New Westminster has gone from having one of the lowest rental markets in Canada to one of the top, ranking 10th in the cost of two-bedroom units and 15th for one-bedroom units.

“I think from here on, when we build rentals we need to reevaluate what we are doing, that we are not building large investment vehicles but we are including below-market in affordable housing,” he said. “I am satisfied there is enough security in this development to force them to trigger that prior to getting that additional density.”

Mayor Jonathan Cote said most of the speakers at the public hearing spoke in favour of the project, but acknowledged the city had heard concerns from area residents about the proposal.

“There is a significant change from this project going from the original zoning of 21 storeys up to the 34 that is being proposed here,” he said. “In my opinion, I think it is supportable because of the benefits we are getting from an affordable housing perspective.”

228
UPDATE: Here's where you could be able to buy cannabis in New West
176
Fraser Health declares COVID-19 outbreak Royal Columbian Hospital
161
Filming in New West: A bright spot in a challenging year
127
Early data suggests B.C. headed towards 'baby bust' due to COVID-19
107
Opinion: Now NIMBYs are whining about shadows from new housing