New Westminster city council wants more clarity on a plan that could see a tower increase from 21 to 35 storeys. Wesgroup Properties has applied for a zoning bylaw text amendment for the comprehensive development zoning at 100 Braid St.
Jul 21, 2020 3:59 PM By: Theresa Mcmanus 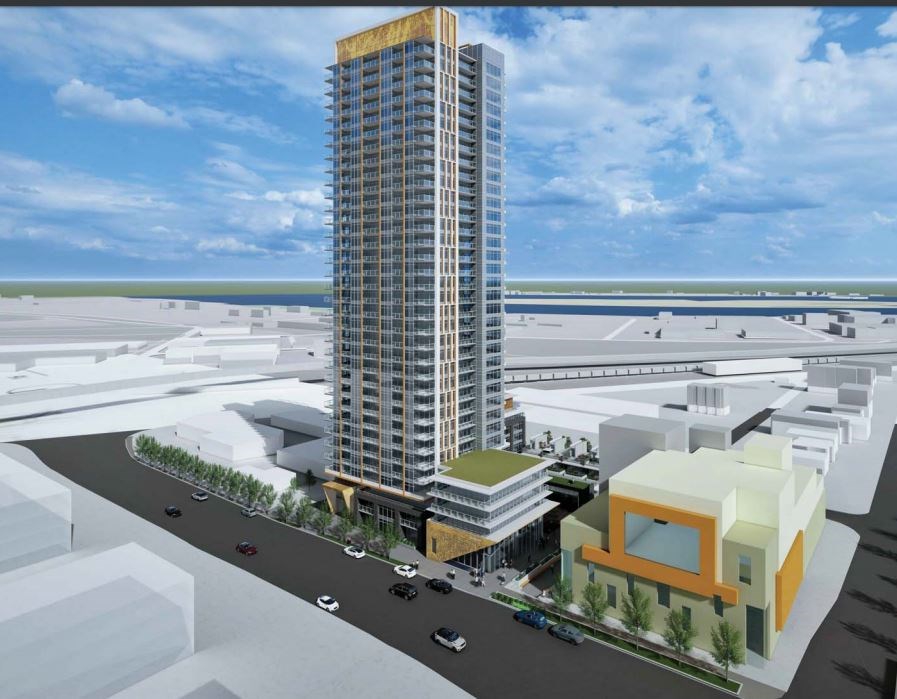 A report to council on an application for a zoning bylaw text amendment for 100 Braid St. included an artist's rendering of a proposed highrise. Council wants more information on the proposal before directing staff to process the application.Contributed

New Westminster city council wants more clarity on a plan that could see a tower increase from 21 to 35 storeys.

Wesgroup Properties has applied for a zoning bylaw text amendment for the comprehensive development zoning at 100 Braid St. The application would allow it to increase the net residential density on the property, increase the maximum building height from 65 metres (213.25 feet) to 118 metres (390.42 feet) and decrease off-street parking requirements.

The 2016 rezoning of the site allowed for the construction of a highrise residential development with an art gallery/studio space. It also paved the way for construction of Urban Academy school on the adjacent site.

Because Wesgroup is now proposing to build a 100% rental building, instead of the strata residential that was originally intended when the site was rezoned, it is seeking additional density and height. A staff report noted the city’s secured market rental housing policy allows council to consider additional density, height and reduced parking ratios in exchange for secured market rental units.

According to staff, Wesgroup is also pursuing funding through Canada Mortgage and Housing Corporation that could allow some of the units to be offered at less-than-market rates, although they wouldn’t be at levels low enough to meet the city’s definition of below-market rates.

“The applicant has indicated that this project has qualified for this time-limited funding program,” said the staff report. “However, as communicated by the developer, a binding commitment will only be received once zoning is in place.”

At its July 13 meeting, council considered a recommendation to direct staff to process the zoning bylaw text amendment application and development permit. After discussing the application, council referred the issue back to staff for further discussions with the applicant about concerns voiced by council.

Coun. Mary Trentadue said the proposal is “a little bit loose” in terms of details about the units that may or may not qualify for CMHC funding.

“This is a pretty significant change regarding density,” she said. “I do appreciate that it is rental, but it’s all market rental. When we are being asked for that kind of a change to the original plan, I would like to have a more concrete, confirmed idea of what the reduced rental rate would be and how many units, and how does that rate compare to market or below-market. I guess I don’t want to get too far down the road without having that information.”

Jackie Teed, the city’s senior manager of development services, said Wesgroup is still in negotiations with CMHC about the funding. Even without the affordable component of the application, she said the proposal is consist with the city’s secured market rental policy.

“We have an opportunity to secure those pieces as well, should they happen,” she said. “It’s really kind of a bonus, if you will, over and above the secured market rental policy.”

Coun. Chuck Puchmayr said there needs to be more transparency about what’s being proposed for the affordable units before council makes a decision.

“This is really too muddled for my liking. I am not going to support this,” he said. “I would really like to see this go back to staff and to crystallize all of those issues before it comes forward. This is just too rushed; too muddled for the type of density we are entertaining.”

Mayor Jonathan Cote said he was “a bit surprised” that such a significant increase in density is being proposed at the site. In addition to concerns about the concept of having a 35-storey tower right next to a single-family neighbourhood, he’s also concerned about the ambiguity related to CMHC’s support for affordable housing on the site.

“All I can say is, if it was just a secured market rental project, for that change in scale in what I am seeing here, I guess I would probably lean us to not go that way,” he said. “I think there is value in being upfront very early in the development process instead of stringing this out for six months to potentially come to an unsatisfactory result for council or the community or the developer.”

480
Here’s where people who are homeless in New West can enjoy a hot shower and get a comfort kit
463
Luxurious residences are setting a new standard of living in Langley
206
UPDATE: Here's where you could be able to buy cannabis in New West
138
New West now grappling with second big COVID-19 outbreak
66
Canadians are outraged by the new egg patty in Tim Hortons' breakfast sandwiches