Urban Academy has received the city’s blessing to expand – despite traffic concerns among some neighbours living near the Sapperton school. About two dozen speakers attended a virtual two-hour public hearing on Sept.
Oct 1, 2020 4:55 PM By: Theresa Mcmanus 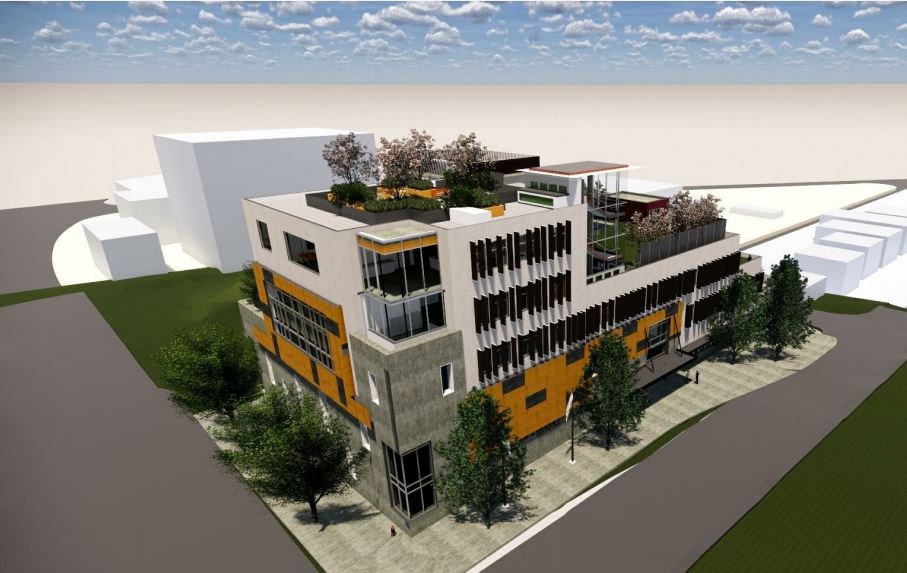 An artist's rendering shows how Urban Academy will look with a proposed addition.Contributed

Urban Academy has received the city’s blessing to expand – despite traffic concerns among some neighbours living near the Sapperton school.

About two dozen speakers attended a virtual two-hour public hearing on Sept. 30, when city council considered an application that would allow Urban Academy to build a 106-square-metre (1,140-square-foot) addition on the fourth floor and a 494-square-metre (5,317-square-foot) addition on the fifth floor of its building at 466 Rousseau St. The zoning bylaw text amendment would increase the maximum number of students attending the school from 450 to 550.

“We almost closed the doors after the loss of our first application in Queen’s Park. The financial loss to us was nearly catastrophic, as was the loss of students who subsequently chose to leave Urban Academy because the future of the school was in serious jeopardy,” said Deborah McKenzie, a member of the private school’s board of directors.  “But we got back on the horse and we built a new partnership with Wesgroup, which allowed us to pursue our current location and go through the development process with the city one more time.”

Urban Academy moved into its new 60,000-square-foot school at Rousseau and Braid streets in March 2019.

“At that time we did not have the means, nor assurances of enrolment, to commit to the full build-out of the fifth floor,” McKenzie said. “So we went as far as we could, investing every possible dollar into maximizing what we could build in our initial round of construction. It was clear at that time, and in all documentation, that we could and eventually hoped to complete the fifth floor when the school needed to and when it could afford to do so.”

Abigail Shu,chair of Urban Academy’s board of directors, said the expansion will allow the school to maintain and attract more students. She said the additional 100 students are needed to build the senior cohort and to ensure the school has a financially sound business model.

“Providing a program of full and diverse offerings and extracurricular options for students requires a larger student body to draw from than the current enrolment numbers will allow,” she said. “If our families do not see a complete senior program, we know from experience there will be attrition, which jeopardizes our ability to maintain a sustainable business model.”

Shu said Urban Academy acknowledges that area residents are concerned about traffic and parking, but the school has a “strong commitment” to mitigating traffic impacts. She said the 100 more students will not translate into 100 extra cars in the area, as the additional students will be in the senior grades and are more likely to take transit than younger students.

The majority of the speakers at Wednesday’s public hearing were parents of students at Urban Academy, who supported the application. Two area residents and one nearby business owner spoke against the project because of traffic concerns, while another area resident voiced concerns about traffic but chose not to support or oppose the application.

“It is one way,” she said of the narrow road. “It is an ambulance route. It is a taxi route. You have to always pull over for whoever is coming from the opposite direction.”

“Urban Academy tries to be a wonderful neighbour. But there is a huge volume of cars,” she said. “I believe that with the increase in numbers, it will only get worse.”

Dee Beattie, who lives in the neighbourhood, urged council to reject the application because of traffic impacts the school is having on the neighbourhood. She noted incidents of cars making illegal turns,  going the wrong way at  a roundabout, blocking driveways, parking in no-parking zones and preventing ambulances from moving because parents are busy unloading kids.

“Rousseau Street is a narrow street that allows one-way traffic at a time. It serves B.C. Ambulance, Royal City Taxi, Amazon drivers and the neighbourhood,” she said. “Come at 3 pm. on a rainy day and see the jam-up. Lower Sapperton has narrow streets, and these streets were not designed for high volumes of traffic.”

Based on what’s happened since Urban Academy opened, Beattie said she has “no faith” that all of its parents can or will obey traffic regulations.

Before approving the application, Beattie said Sapperton residents need a traffic plan that includes the impacts of the future Sapperton Green development at Braid and Brunette, the future tower at 100 Braid St., the expansion of Royal Columbian Hospital and traffic from the Brunette Interchange.

“Urban Academy pays no city taxes,” she said. “It serves very few in Sapperton, yet the residents in lower Sapperton live with the fumes of idling cars and the excess traffic.”

Following the public hearing, council approved the zoning amendment bylaw that allows the expansion to proceed. Only Coun. Chuck Puchmayr voted against the application.

“This expansion is close to a 25% increase,” he said of the expanded enrolment. “The concerns of the neighbourhood are valid. The traffic issues and the safety issues – I have had numerous calls – they are valid. They are very valid concerns.”

Other council members supported the application, saying the “urban school” is located in close proximity to SkyTrain and is an appropriate land use at that site. They noted traffic is a concern around all New West schools.

“There is no other school where we don’t have pickup and drop-off traffic issues,” said Coun. Patrick Johnstone. “It is a constant challenge across the city. But I don’t hear other schools making the commitment that UA is towards managing their pick-up and drop-off. I hear the anecdotes about traffic chaos. I see it every day at schools in the community, but what is unique to me is Urban Academy actually seems to be committed to taking serious action to if it and investing in fixing it.

Mayor Jonathan Cote said the city needs to “step up” and continue to partner with the neighbourhood about traffic challenges as the area evolves.

“This will be the last expansion and will complete this project. There won’t be additional floors there. I think that can alleviate some of the concerns that this will continue. This will round out the school and how it fits into the community,” he said. “Moving forward, given the challenges that we do face and concerns from the neighourhood, I do want to see us continue to work with school community to really mitigate the concerns we are hearing from the neighbourhood.”

491
Here’s where people who are homeless in New West can enjoy a hot shower and get a comfort kit
477
Luxurious residences are setting a new standard of living in Langley
212
UPDATE: Here's where you could be able to buy cannabis in New West
143
New West now grappling with second big COVID-19 outbreak
68
Canadians are outraged by the new egg patty in Tim Hortons' breakfast sandwiches