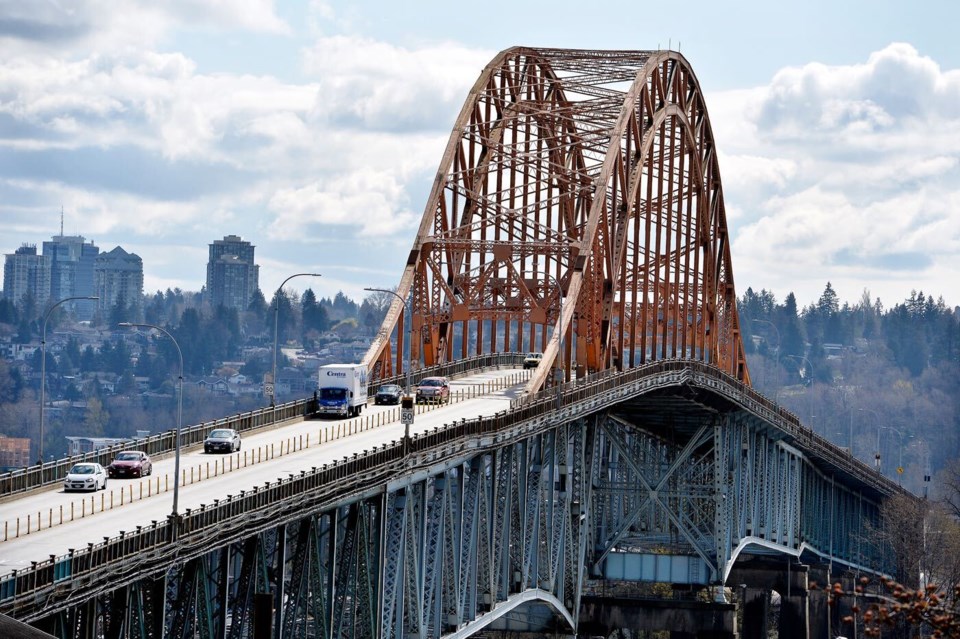 New West cycling and pedestrian advocates want the province to take another look at a “behemoth” overpass that’s being planned as part of the Pattullo Bridge replacement project.

Wendy Itagawa, executive project director, recently updated city council on the multi-use pathways that will be constructed as part of the $1.377-billion Pattullo Bridge replacement project. She said the Walkers’ Caucus and HUB Cycling have provided valuable input about the multi-use pathways, and a number of changes were made to the design based on their feedback.

Gary Carlson, co-chair of HUB Cycling New West, said HUB and the Walkers’ Caucus convinced the project team to make a number of changes, including an overpass from the Agnes Greenway to the new bridge, straightening out the Agnes/McBride overpass approach, safety improvements at the McBride/ Columbia Street intersection and the inclusion of a multiuse path on the west side of McBride Boulevard. Unfortunately, he said, TI Corp has chosen not to improve connections to the Central Valley Greenway, which is the biggest cycling concern of the entire project.

“TI Corp’s proposed design would change this well-used section of the Central Valley Greenway to an undesirable route that will be avoided by a large portion of users, all while spending millions and millions of taxpayers’ dollars,” he said. “This solution will actually encourage eastbound cyclists to stay on Columbia Street.”

Carlson urged city council to require TI Corp’s design team to revisit their “unnaturally high overpass” and provide a “corrected” design that will be used by future users of the greenway.

Reena Meijer Drees, a member of the Walkers’ Caucus, applauded changes that have been made by the project team. She, too, opposes the “extremely high” Central Valley Greenway overpass, which will pass over the southbound onramp to the bridge.

“We heard that the highest point is 15 metres above Columbia, which would make this overpass twice, if not three times, as high as the overpass across McBride by Victoria Hill. It has to be this high to clear the onramp, which is itself climbing. You can think of it as an overpass over an overpass,” she said. “In a nutshell, users of the CVG are being asked to climb most of the way back up to Agnes and back down again.”

Faced with “this behemoth” she said some people will not use the overpass and will hunt for shortcuts.

“Why spend millions on something that is unsatisfactory from the day it opens?” said Meijer Drees, who believes a better alternative can be developed.

Itagawa said TI Corp considered a number of options for the Central Valley Greenway connection, but they presented safety concerns or technical conflicts with the SkyTrain tunnel that passes through the area. She said the decision was made to stick with the current design because it’s safe and accessible for all ages and abilities and minimizes visual impacts on Albert Crescent Park and nearby residential buildings.

“We have gone through a number of reviews of the different options we have looked at,” Itagawa said. “We have landed on maintaining with the current design.”

Coun. Patrick Johnstone expressed concern about the “circuitous” route and the elevation of the proposed connection to the Central Valley Greenway.

“There are always compromises made in these types of structures, but I think that in this case we need to make them look again at how the CVG transverses through here. I think there are opportunities,” he said. “I think, fundamentally, one of the issues is we are not going to separate traffic here because cyclists are not going to use this 15-metre high overpass that doesn’t go the direction that they want to go. They are going to stay on Columbia.”

Council unanimously supported Johnstone’s motion directing city staff to engage with TI Corp and the active transportation advocacy community about improving the usability of the Central Valley Greenway connection through the Pattullo Bridge replacement area. Council will also correspond with New Westminster MLA Jennifer Whiteside and B.C.’s minster of state for infrastructure to express support for concerns raised by HUB Cycling and the Walkers’ Caucus, with the hopes that more creative solutions can be found.

Mayor Jonathan Cote said he appreciates alls the changes TI Corp has made in response to concerns from the city and local advocacy groups.

“I think at times the city of New West has probably been a little bit of a challenge for the team. The perspective we are always taking is we only get one shot to get this project right, particularly when it comes to some of the urban integration and sustainable transportation,” he said. “Obviously, that’s a huge priority to make sure we get it right.”

Johnstone said he’d like TI Corp to spend more money on design and integration and less money on building a large concrete structure in the sky.

“We are not asking TI Corp to spend more money here on more infrastructure. We are actually asking them to look at this big, expensive piece of infrastructure they are building,” he said. “Something is wrong if we are spending this money building infrastructure that doesn’t actually solve the problem we are trying to solve.”