A six-lane replacement for the Pattullo Bridge would have “significant” impacts on New Westminster’s roads, says the city’s director of engineering.
Feb 21, 2020 6:35 AM By: Theresa Mcmanus 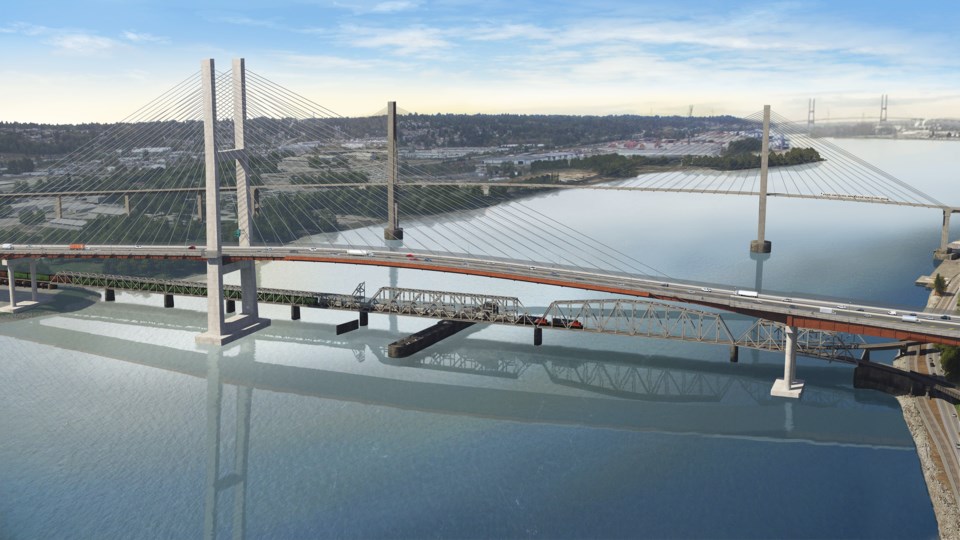 Conceptual renderings of the bridge that will replace today's Pattullo Bridge, which runs between New Westminster and Surrey.Contributed/Ministry of Transportation and Infrastructure

A six-lane replacement for the Pattullo Bridge would have “significant” impacts on New Westminster’s roads, says the city’s director of engineering.

The provincial government recently announced construction of a new four-lane replacement for the Pattullo Bridge will get underway this year. Although the province and the Mayors’ Council on Regional Transportation had previously endorsed a plan for a four-lane bridge with designated lanes for pedestrians and cyclists, the announcement prompted some people to question why a six-lane structure isn’t being built.

Lowrie said the bridge is being built as a four-lane bridge, but wouldn’t preclude expansion to six lanes in the future. However, he said expanding the bridge to five or six lanes would have a “significant impact on New Westminster’s road network” as there is no additional road capacity on this side of the river.

Last month, the Surrey Board of Trade released a report indicating the majority of its members who had responded to a survey want a six-lane bridge on opening day.

“It will have modern lane widths, better connections, a centre barrier and high-quality cycling and pedestrian facilities,” stated the mayors’ council’s website. “The new bridge will be designed to keep the possibility of future expansion to six lanes, if need arises, to meet demand increased beyond current forecasts.”

While some Metro Vancouver politicians have recently suggested the new bridge should be six lanes, that’s not going to happen at this time.

“The ship still has sailed on this matter and the province is building a four-lane bridge,” said Mayor Jonathan Cote in an email to the Record. “It was always acknowledged that at some point there would be a discussion about what the conditions would be to discuss the expansion of the bridge to six lanes, but that conversation is way too premature and should occur after the new bridge is completed and we know the impacts of the new bridge on the system and see where other transportation infrastructure discussions have evolved.”

“That is still available on our website. It’s still very valid,” Lowrie said. “The conclusions were a four-lane replacement bridge, ideally tolled at the time, both to help pay for it and as a transportation demand management measure. At that time, the Port Mann Bridge was tolled.”

Construction of the new $1.4-billion replacement for the Pattullo Bridge is expected to get underway this spring or summer. It will be located immediately upstream of the railway bridge, which is east of the existing bridge and train bridge.

“They will be preparing traffic management plans,” Lowrie said. “The contract has just been awarded. It is a design-build contract, so that means the proponent will be doing the detailed design and building it. That detailed design has not started yet. All we have is conceptual plans at this time.”

“The detailed design works are just getting underway,” Lowrie said. “The construction methodology and sequencing of work has yet to be determined.”

The bridge, which is expected to open in late 2023. Once the new bridge opens, the existing Pattullo Bridge will be dismantled.

Provincial representatives involved in the Pattullo Bridge replacement provided city council with an update on the project at Monday’s council meeting.

Coun. Patrick Johnstone said he’s happy to hear city staff and the province are working together on urban integration of the new bridge into the area. He noted the province isn’t often in the position of putting bridges into the middle of active urban areas.

“I am glad to see that we are actually moving along and that there is a timeline,” he said. “As an active transportation user, I am just glad to see there is going to be proper access for cyclists and pedestrians across that bridge for the first time. It’s going to make a big difference for a lot of people.”

* The new structure will have one tower, which means it will require less infrastructure in the river. The existing bridge has six piers in the water and the new crossing will only have two piers and one tower, which will reduce in-river construction and make for easier navigation in the Fraser River.

* A waterfront greenway on the New Westminster side of the bridge is included into the design.

* The new bridge will connect to McBride Boulevard on the north side of the bridge and to King George Boulevard on the south side. It will also have direct ramps onto Columbia Street in New Westminster, thus reducing reliance on local streets for vehicles getting to and from the bridge.

* The province and city are continuing to work with staff on pedestrian and cyclist connections to the bridge and to ensure they’re well-integrated into the urban setting. More details on those connections will be provided in the spring.

* Public engagement about the project design and construction timelines is taking place this spring.

* Geotechnical work will be taking place in the coming weeks, so people may see some drill rigs in the area where the bridge will be constructed.

* Cables won’t go over the lanes. A de-icing system is part of the bridge’s design.

* Suicide-prevention barriers are included in the bridge’s design.