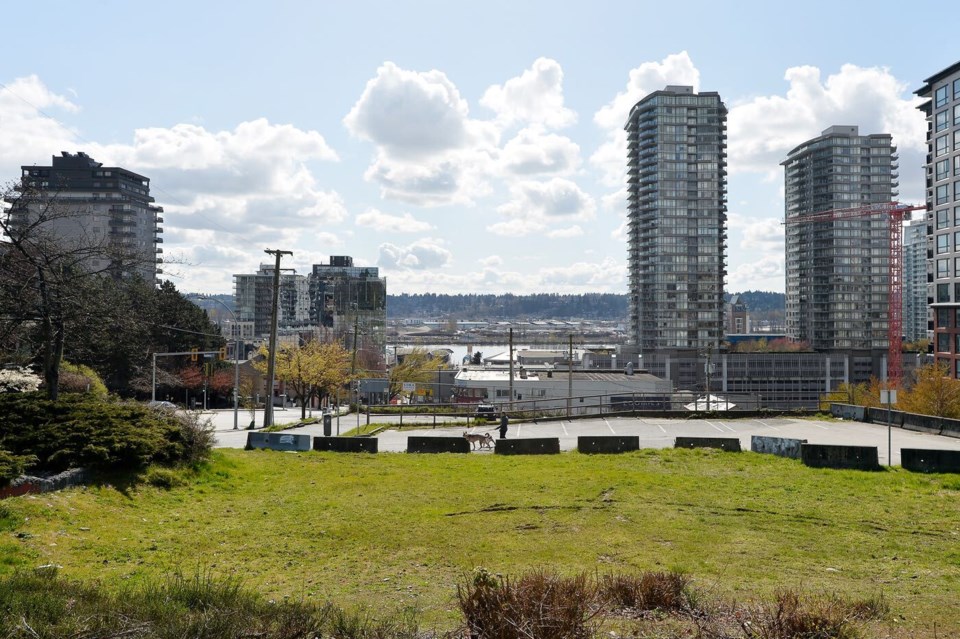 A vacant site across the street from Douglas College's main campus in New West could be home to student housing and academic space.Jennifer Gauthier/The Record

A project that’s been dormant for nearly two decades is showing signs of life.

Douglas College has approached the city about building a highrise at the corner of Royal Avenue and Eighth Street. Council recently received a staff report about a preliminary application review of the proposal, which would include academic floor space topped by 244 units of student housing on a site located across the street from the college’s main New Westminster campus.

New Westminster Fire and Rescue Services’ main fire hall was located at the corner of Royal Avenue and Eighth Street for decades, before the new Glenbrook Fire hall opened in the fall of 2002.

“It’s an exciting potential for the city to have student housing happening and to finally activate that empty space across the street from Douglas College,” said Coun. Patrick Johnstone.

A staff report states the building would include 10 storeys of academic space and 13 storeys of student housing. Because of the way the building is designed, it would be 16 to 18 storeys, varying with the grades of the hill on which it will be built.

City council received a preliminary report about the project at its April 12 meeting. That came on the heels of a staff report to the land use and planning committee’s March 29 meeting, when the committee directed staff to provide the applicant with feedback on the proposed massing concept, street activation and public realm integration, privacy considerations between the proposed academic space and adjacent residential sues, and protection of views of the Fraser River from key public spaces.

“I am excited about this,” said Coun. Chuck Puchmayr. “I am really looking forward to this getting off the ground, finally, and seeing student housing on that site.”

Puchmayr, a member of the land use and planning committee, said the project is significant because there has been a “crisis” in student housing in B.C.

“Prior to this new government coming in, in the last 16 years prior to that, 130 units were funded by the then-provincial government. Now, without this project, 1,975 units are being funded and on the way,” he said. “It’s a huge investment in student housing. Way overdue.”

Student housing not only benefits students, but it also benefits local neighbourhoods by taking some pressure off of residential properties and rents in the city, Puchmayr said.

A staff report stated the academic spaces would be on the south side of the site and oriented toward Eighth Street.

Johnstone said he’s “ a little bit concerned” about the livability of the suites for the student housing, as they’re proposed to be on the side of the building near Eighth Street and Royal Avenue.

“It is kind of a noisy and disruptive intersection with large trucks constantly idling there and grinding it up the hill,” he said. “The way it was shown on the drawings, it appears those residences are sort of sitting right on top of that intersection. I am wondering if there is any consideration to outside noise impacts and how it affects the livability of the residents there.”

Mike Watson, a senior planner with the city, said the applicant is doing a bit of a balancing act in terms of structuring the different component s of the building.

“They have intentionally allocated their outdoor space away from that intersection, which is south facing on the other side of the building, to make sure that outdoor space is welcoming and usable, and is not affected by the noise that you have identified with the Royal intersection,” he said. “The other balance there is the other side is closer to existing residential buildings. …The preliminary program they have come up with is balancing those considerations.”

The city will provide the applicant with a pre-application review letter that outlines feedback from the land use and planning committee and city officials.

“I don’t think it was thought it would take this long to see an expansion of student housing and the college onto the site, but that’s always been the vision for this area,” he said. “It’s nice to see that that this project is starting to get some momentum.”