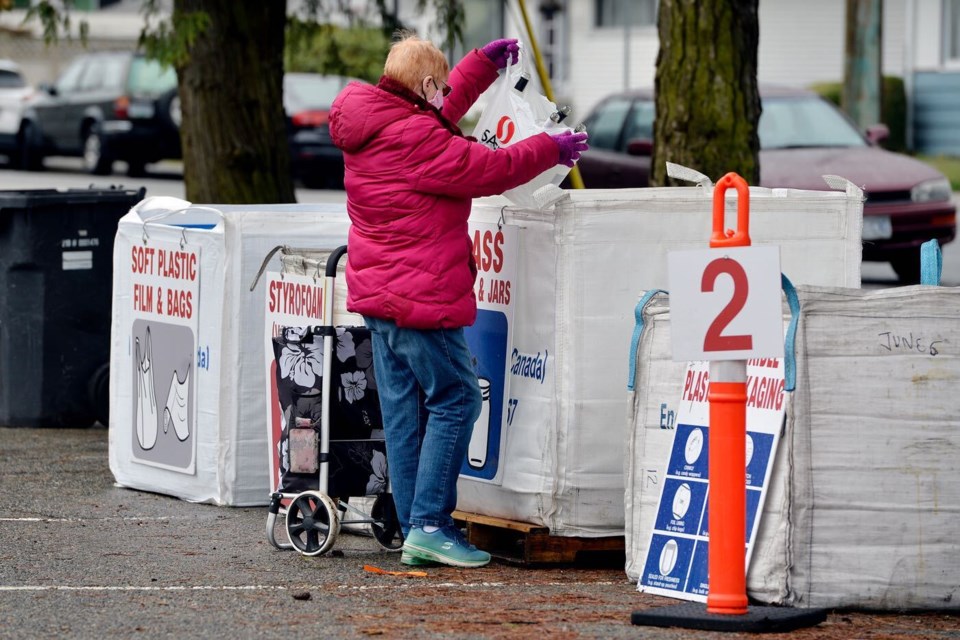 The city has been holding monthly pop-up recycling events to bridge the gap for services between the closure of the local recycling depot and the opening of the regional facility in Coquitlam.Jennifer Gauthier/The Record

New Westminster has one more pop-up recycling event planned before the expected opening of the new regional recycling facility.

Since the closure of the local recycling depot last March, the City of New Westminster has held pop-up events to collect some items that aren’t collected at local homes and multi-family residences.  The one-day events will continue until Metro Vancouver’s new regional transfer facility opens on United Boulevard.

“The city’s pop-up recycling events have gone as well as they could have, given the challenges in keeping both staff and patrons safe,” said Kristian Davis, the city’s acting manager of engineering operations. “Attendance to the city’s pop-up recycling events is highly dependent on weather.  There has been between 30 and 175 people attend these monthly events, with the median attendance being 140.”

Residents are able to drop off items such as Styrofoam and soft plastics.

“The volumes of material collected have been fairly consistent, with approximately 100 kilograms of soft plastics, 100 kgs of ‘other flexible plastic’ packaging, 250 kgs of glass packaging and roughly 65 kgs of foam at each event,” Davis said. “This past event featured participation from ElectroRecycle, who provided convenient access for visitors to drop off small appliances and power tools.”

“The city will evaluate the need to continue hosting pop-up recycling events beyond the next scheduled event on May 15th and considerations for additional materials collected or services offered during the events,” Davis said. “The city does anticipate the new United Boulevard recycling and waste centre to open before the end of June, when the lease is up for the existing Coquitlam transfer station.”

In March, Metro Vancouver’s Zero Waste Committee received a report about the status of the facility that will be opening on a 6.2-hectare site at 995 United Blvd. in Coquitlam. It stated the facility is expected to open in late spring 2021 but did not provide a specific date. It will accept a wide range of materials from commercial, municipal and small vehicle customers, with some materials being accepted for a fee (including garbage, treated wood and mattresses) and some materials being accepted in the free recycling area.

Items that will be accepted at no cost at the recycling depot include: batteries; Styrofoam (white and coloured); paint products and solvents; beverage containers; recyclable paper and paper packaging; film packaging; pesticides (must be in original labelled container and be no more than 10 litres per container); glass packaging; plastics packaging; and corrugated cardboard. Other items that can be dropped off at the depot include: propane tanks; cellular phones; cooking oil; gasoline (must be in approved ULC container, with no more than 25 litres per container); lamps and light fixtures; small appliances and power tools; smoke and carbon monoxide alarms; electronics; oil filters; and thermostats.

Metals, including scrap metal, metal appliances, outdoor power equipment and metal packaging, can be taken to the facility. Books and clothing (for donation) will also be accepted at the new depot.

In a closed meeting in February 2019, city council agreed to participate with Tri-Cities municipalities and Metro Vancouver on a new transfer station and recycling depot that’s being built on the former Coquitlam landfill. The decision, which was opposed by many New West residents, was made because the layout selected for the new aquatics and community centre at Sixth Avenue and McBride Boulevard prevented the recycling depot from remaining at its current location.