Some residents and businesses worry it's too close to daycare, park
Apr 20, 2021 3:52 PM By: Theresa McManus 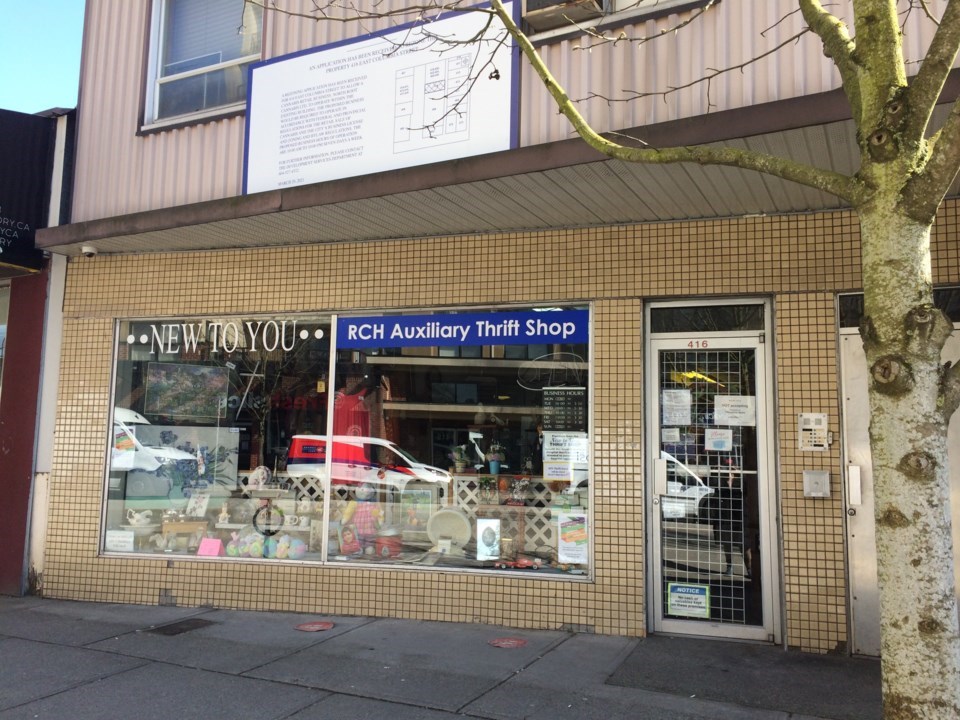 This Sapperton unit currently occupied by the Royal Columbian Hospital Auxiliary's New To You Thrift Shop is the future site of a North Root Cannabis shop.File

A cannabis store has been given the go-ahead to open in Sapperton despite some neighbours’ concerns that it’s located too close to services for children and vulnerable citizens.

“We think this is the right business, but in the wrong location,” said Gordon Hobbis, who spoke on behalf of the Sapperton Business Association.

Based on a map on the city’s website, Hobbis said it appears the site is located within an area, or close to an area, deemed to be a “no-go zone” for a cannabis retail store.

Several Sapperton residents expressed concerns about the store’s proximity to vulnerable people who may be accessing services at the Elizabeth Fry Society, as well as children attending nearby venues such as a daycare centre, Sapperton Park and a Kumon learning centre.

Paul Gill, the parent of a child attending a nearby daycare centre, expressed concern about people leaving the store and going across the street to smoke cannabis in the plaza located next to the daycare. He said he’s never seen so many sensitive uses so close to a cannabis store.

Curtis Van Marck, owner of Barley’s Home Brewing Supplies at 455 East Columbia St., supported the application. He believes it’s hypocritical to oppose a cannabis store when a pub and a liquor store are already located nearby.

Other speakers at the public hearing included a representative from the B.C. Government and Service Employees’ Union, who urged council to reject the application. She said any future cannabis stores should be public stores as they provide union jobs that have good family-supporting wages and benefits, a good track record of ensuring substances stay out of the hands of minors and a history of giving back to communities through initiatives such as dry grad fundraisers.

“We have three operating cannabis stores in New Westminster, and the concerns I heard today were all heard during the applications for those stores,” Johnstone said. “We haven’t really had the negative impacts in these stores that I hear people expressing concerns about.”

Johnstone said it’s important to educate youth about cannabis, the same way they need to be educated about tobacco, alcohol, harder drugs, automobiles and other things that cause danger to children.

“I don’t think the prohibition or the hiding of its existence from children is a way to make children safe, fundamentally,” he said. “This is part of our community, and we need to find ways to talk about it honestly with children so that they can be safe.”

Puchmayr opposed the application because he believes this particular location is too close to locations frequented by children. He also believes all future cannabis stores in the city should be government-run stores.

“There are locations in Sapperton where I think it would fit. … I am opposed to that location,” he said. “Further down on East Columbia, there are some opportunities there ... that would not interface with the children.”

Nakagawa said New Westminster is an incredibly small city, so there will always be concerns about the proximity of cannabis stores to parks and child-care facilities.

“We are a community that has a lot of social services, so this will always be an issue that we face. We will not find locations, I don’t think, in business districts that are a great deal away from these types of locations,” she said.

Nakagawa said it appears most people going into cannabis stores are “average folks” who go into the shops and quickly leave.

“The truth is that kids have always been around cannabis. And it was much more concerning when it was illegal and there was a street market, especially with the poisoned drug supply that we have,” she said. “Having government control of cannabis is actually a way to make it safer for consumption for everyone when they can legally use it, but it’s also a way to keep it out of hands of children. And there is lots and lots and lots of evidence, peer reviewed from around the world, that prohibition doesn’t work.”