New Westminster school district says it can't afford to offer elementary program in 2021/22 after only 52 families signed up
May 14, 2021 3:52 PM By: Julie MacLellan 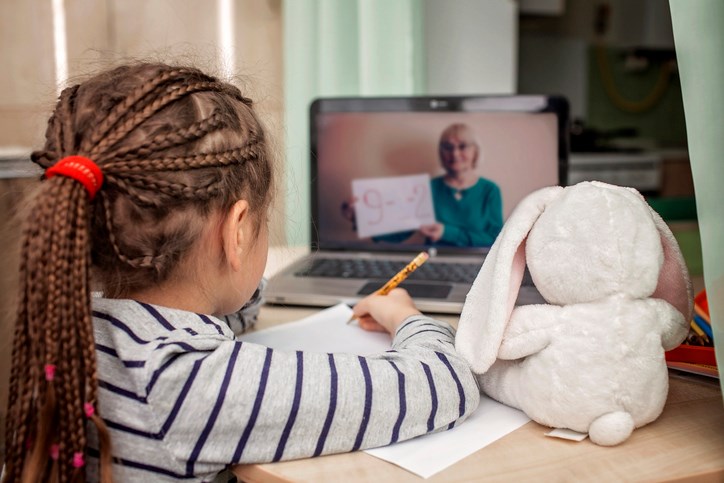 A proposed Grade 2 to 8 online learning program in New Westminster is officially off the table, despite a last-ditch plea from parents at the May 11 school board meeting.Getty Images

New Westminster’s elementary online learning program is a no-go for 2021/22 despite a last-ditch effort by parents to save it.

A handful of parents turned out at the school board meeting May 11 (held virtually via Webex) to plead for the continuation of the program, which was started by the school district this year as a response to the COVID-19 pandemic.

The district had proposed offering a Grade 2 to 8 elementary online learning program in 2021/22, contingent on enough interest from local families. But, after only 52 families signed up, the district said it couldn’t afford the $75,000 or so it would cost to subsidize the program.

“Ultimately, running any specialized program with a small number of students is extremely expensive to operationalize and sustain,” superintendent Karim Hachlaf said.

Hachlaf acknowledged the proposed 2021/22 program wasn’t as popular with families as this year’s has been. This year’s online program – which attracted more than 400 students – has emphasized real-time “synchronous” teaching, with students divided into virtual classes. The 2021/22 program was planned to shift to “asynchronous” learning; that is, while work would still be planned and assigned by a teacher, families would be expected to do most of the learning independently, on their own time.

Hachlaf said continuing this year’s model is simply not feasible because the cost is being covered by special federal COVID-19 funding.

“Unfortunately, we cannot continue the current program. That has been supplemented by one-time dollars and is not on the table,” he said.

Parents asked district staff how many students it would have taken to make the program possible. They also pushed for a breakdown of the numbers to show how the district had arrived at the $75,000 deficit figure.

As far as numbers that would have made the program feasible, Hachlaf said the district has chosen to deal only with the specific number of registrations it actually received.

“We engaged with our families in order to move away from the guesswork and hypothetical scenarios,” he said.

Staff did not provide a detailed breakdown of the costs associated with the proposed 2021/22 program.

But associate superintendent Maryam Naser said it had become clear the program would be even more expensive to run than initial cost estimates suggested. Because of the distribution of students across all grade levels, she said, the program would have required three teachers rather than the two that were originally proposed.

Naser also pointed out there would be extra costs – education assistant, learning resource teacher and clerical support – and a loss in revenue to the district because online learning programs come with a lower per-student provincial grant than regular bricks-and-mortar schools.

Adding to all of that, she said, is the fact that the program would become even more expensive should any families decide to return to in-class instruction part way through the school year.

But parent Sue Kenny, whose daughter is in this year’s online program, said finding the money comes down to a question of priorities. She said the district should be able to find money somewhere in its accumulated $4-million surplus.

“If there was a will for this program, a true desire for this program to continue, and if we were truly listening to what parents wanted, there would be a way to find this money,” she said.

Kenny said the program will still be necessary by fall given the way the COVID-19 pandemic is evolving.

“To think that it’s going to be fine and dandy by September is not realistic,” she said.

Fellow parent Anne Whitmore said she was “deeply disappointed” by the district’s decision.

“I guess I’m surprised that I didn’t hear a problem-solving attitude that we try to teach our children, about how we make this work,” she said.

The two thanked trustee Mary Lalji, who had attempted to introduce a motion during an earlier discussion on trustee pay increases that would have asked trustees to contribute $5,000 apiece from their 2020/21 and 2021/22 stipends towards the costs of the program. Discussion on the motion was stopped on a point of order.

Naser told the parents the district will continue to monitor the pandemic and is prepared to adjust its online learning plans if it becomes necessary for health and safety reasons.

If there are immunocompromised children who cannot return to classrooms in the fall, Naser said the district will work with those families – as it already does by providing the services of a liaison teacher to students who are unable to attend school for extended periods of time.

She also said the district is prepared to talk to families who want to be enrolled in a bricks-and-mortar school but who may want to attend on a less-than-full-time basis.