Last year conservation officers fielded 2,000 calls from Tri-City residents concerned about bears and destroyed 15 bruins because of conflict concerns; this year cities are working together to remind residents to be careful with their garbage and other attractants so bears stay away
Apr 14, 2021 3:16 PM By: Diane Strandberg 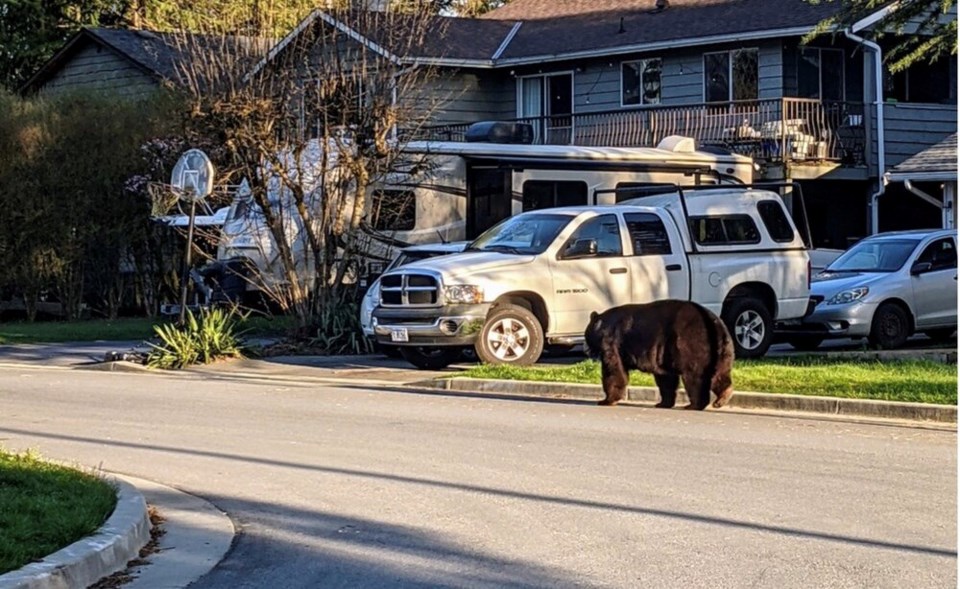 This large bear was photographed ambling through a Port Coquitlam neighbourhood on Tuesday.Stacey Gokool

A big black bear photographed strolling through a sunny Port Coquitlam neighbourhood this week is a reminder to lock up garbage and remove all attractants.

Last year there were more than 2,000 calls to conservation officers about bears in the Tri-Cities, and as many as 15 bears had to be destroyed because of conflicts — mostly because bears got used to eating people's garbage or other attractants, and wouldn't leave.

One Port Coquitlam resident hopes this year will be different.

Stacey Gokool, who snapped the photo accompanying this story, said the bruin is a regular "character" in her Lincoln Park/Sun Valley neighbourhood and no cause for alarm.

“Typically we see bears just wandering by out for a stroll, likely headed toward the slough and blueberry farms to the northeast for dinner,” Gokool told the Tri-City News.

She said aside from a few knocked down fences, the bruins have been harmless. Gokool credits neighbourhood efforts to remove all animal attractants for the fact that there are few problems with the “local characters.”

“You rarely see garbage bins or other attractants left out in our neighbourhood,” Gokool said.

Her comments come as the cities of Port Coquitlam, Coquitlam, and Port Moody issue warnings to people to rid their yards of garbage, bird feeders, suet and fruit that might lure bears into their yards.

“After bears find a meal once in a garbage cart, they quickly learn to check all the homes on a street and teach their cubs to do the same. Bears that regularly eat garbage lose their natural fear of humans and can become habituated to accessing unnatural food sources,” a press release notes.

According to recent reports on the Wildlife BC Wildlife Alert Reporting Program, a few bears have been spotted in Coquitlam and Port Coquitlam, including April 13 in the Citadel Heights neighbourhood.

This year, the cities of Coquitlam, Port Coquitlam and Port Moody are combining efforts to publicize information about bears for residents.

In addition to reminding people to lock up attractants, the cities are advising the public to contact the Provincial Conservation Officer Service 24-hour toll-free hotline at 1-877-952-RAPP (7277) or rapp.bc.ca if they witness an aggressive or threatening bear, or if there is a conflict that threatens public safety.

The cities’ advisory reflects growing numbers of complaints about bears, which resulted in 15 being euthanized by BC Conservation Officers last year due to conflict concerns.

According to BC COS, Coquitlam had the most complaints last year (1,074), of which 53 were attended by conservation officers. Five bears were destroyed and nine were hazed — a method used to discourage bears from hanging around in an area.

Port Coquitlam had 623 calls last year, 31 were attended, seven bears were destroyed, and two were hazed.

In Port Moody, there were 403 calls, 34 were attended, two bears were destroyed and two were taken to Critter Care for rehabilitation.

One bear was killed by other means not specified by BC Conservation.

WALK WITH SOMEONE ON TRI-CITY TRAILS

Meanwhile, with bear season starting, walkers are encouraged to be cautious on trails, with the following safety tips:

• travel with someone else, or in a group

• be alert where bears may not be able to see, hear, or smell you

• make noise (talk loudly, clap or sing) to let the bear know you are there

• keep children close, and dogs on a leash

• watch for fresh bear signs such as droppings, tracks and scratches on trees

THINKING OF LEAVING YOUR BBQ UNWASHED?

Here are some tips and tricks to avoid potential bear conflicts in your yard:

• freeze meat and strong-smelling food scraps, and wait until collection day to put them into the green cart

• harvest fruit, berries and vegetables before or as they ripen, and clean up fallen fruit

• suspend bird feeders out of reach from April to November