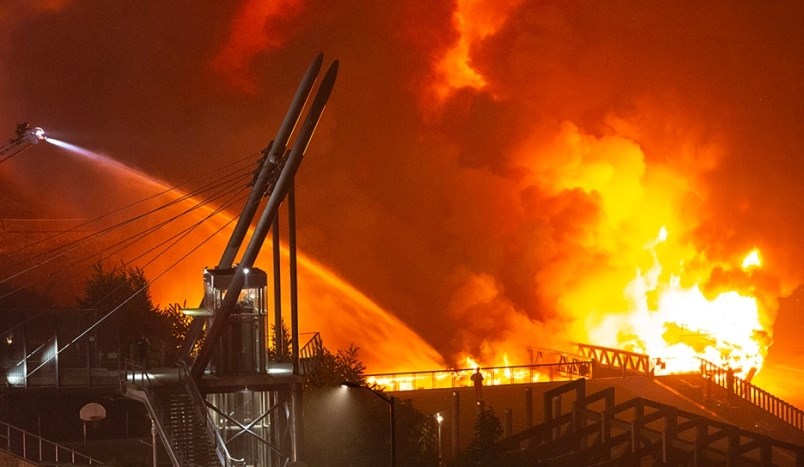 September's fire at Westminster Pier Park has prompted consideration on whether the city needs a fire boat to respond to potential fires on its waterfront.Rick Fabbro/Photo

The City of New Westminster has pulled the plug on a proposal to include a fire boat in its 2021 budget.

When council got its first look at the draft capital budget in November, one of the items caught some council members by surprise – a $1.5-million marine firefighting boat. The concept of a fire boat came about after the massive fire at Westminster Pier Park on Sept. 13.

Coun. Patrick Johnstone said the city needs to have a discussion about whether it needs a fire boat before approving such a large expenditure as part of an overall budget. He also suggested the city should be talking to the port authority and neighbouring communities along the Fraser River about the potential for shared resources on the water.

Coun. Chuck Puchmayr suggested the city should approach organizations such as Fraser Surrey Docks and Kruger about their ability to fight fires on the Fraser River. While he isn’t ruling out the purchase of a municipal fire boat, Puchmayr said he’d first want the city to look at partnerships.

Fire Chief Tim Armstrong told council he’s been involved in discussions about the topic with other fire departments and organizations. He said he will be bringing a comprehensive report back to council on the issue.

“Part of the report that I will be bringing forward is looking at, can we create a partnership with the tug companies, for instance, on the river,” he said. “One of the most valuable assets that we had during the fire was the ability to put our high-volume, high-pressure pumps onto a work barge and to be able to attack the fire that way. We are going to be looking at all the options on the table.”

When council considered its draft 2021 capital and operating budgets on Dec. 7, the fire boat was no longer included in the budget. The report noted the fire chief will provide council with a feasibility and business case analysis in 2021, so the fire boat request in the capital budget has been deferred to 2022.

A boat of its own?

As part of the response to the Westminster Pier Park fire, the Vancouver Fire Department dispatched one of its two fire boats to New West to help fight the fire.

Armstrong said the fire boat was nearly out of fuel by the time it arrived in New Westminster and had had trouble finding a fuel source on the Fraser River at that time of night. After working a couple of hours, he said there was a fire in the engine room, which took the boat out of service and caused substantial damage to the boat.

A staff report to council noted the ability to fight waterfront fires is important in a city like New Westminster, which has a "significant amount" of property at risk on the river.

"Currently, there is no dependable resource available in a timely manner on the north or south arm of the Fraser River,” said the report.