New Westminster to consider need for a fire boat

The idea of a fire boat is being floated as part of the City of New Westminster’s 2021 budget – but it came as a bit of a surprise to some members of city council.
Nov 17, 2020 4:56 PM By: Theresa Mcmanus 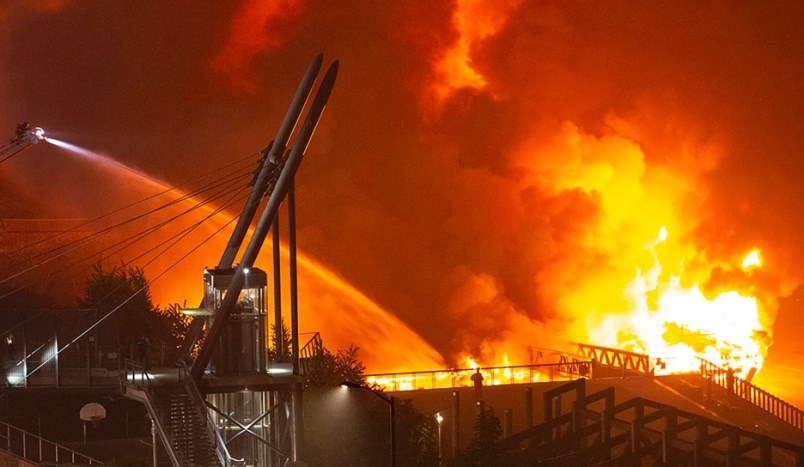 A suspect has been charged in connection with the Sept. 13 blaze at Westminster Pier Park.Rick Fabbro

The idea of a fire boat is being floated as part of the City of New Westminster’s 2021 budget – but it came as a bit of a surprise to some members of city council.

On Monday, council had its first look at the proposed 2021 capital budget, which includes more than 500 line items – including $1.5 million for a marine firefighting boat.

“As a result of the timber wharf fire, it has raised concerns with council on what additional risk do we have along the waterfront of New Westminster,” said a staff report. “As we do have a significant amount of property at risk along our waterfront, NWFRS (New Westminster Fire and Rescue Services) and emergency management division will be bringing forward a comprehensive report, including the cost of a fire boat/working platform available for rescue and fire suppression. Currently, there is no dependable resource available in a timely manner on the north or south arm of the Fraser River.”

Coun. Patrick Johnstone said he doesn’t understand how a $1.5-million fire boat ended up in this year’s proposed capital plan.

“I think we need to have a discussion about whether we need one,” he said.

In addition to discussing the fire department’s operational requirements, Johnstone said the city needs to have a conversation with the port authority and neighbouring communities along the Fraser River about the potential for shared resources on the water.

“I think that is definitely a discussion that is going to take more than enough time for us to kick that $1.5-million item down the road until at least 2022, if we agree that is something that we agree we functionally need,” he said.

Fire Chief Tim Armstrong said a fire boat consortium existed for a number of years, but municipalities broke away from that group a few years ago.

“Now, Vancouver is the only one that has two operational fire boats. We did call one in during the fire, but the response was not timely. It was almost six hours to get around to our location,” he said. “There are really no assets on the north and south arm of the Fraser, as it relates to fire protection. I know it is not a municipal responsibility, but we do have a lot of valuable assets along the waterfront.”

At Monday’s workshop on the capital budget, Armstrong told council he’s in discussions with Richmond and Delta about the issue, and he will be bringing a comprehensive report back to council. He said the fire department is also updating the hazard risk and vulnerability assessment, which will include all infrastructure along the city’s waterfront.

Fire broke out at Westminster Pier Park on the evening of Sept. 13. The Vancouver Fire Department dispatched one of its fire boats to New West to help fight the fire.

“By the time the fire boat got to our location, they were almost out of fuel. They had problems finding an alternative fuel supply at that time of night on the Fraser. That was another two hours before they got on-site,” Armstrong said. “They worked for a couple of hours and then they ended up having an engine room fire and they lost both their engines due to a fire in the engine room, and it basically took the boat out of service. It sustained substantial damage to the boat. The boat is still out of service right now.”

Armstrong said Vancouver, Burnaby and the North Shore were part of a fire boat consortium that was in place for about 20 years.

“When that consortium was disbanded about five years ago, the City of Vancouver went out to municipalities again and wanted to see if that consortium would be resurrected. None of the municipalities were interested, so Vancouver purchased two boats,” he said. “They have a fairly healthy fee schedule if you call them out. Again, response time is so long to get to our location. It’s not really feasible other than for a defensive attack on a fire.”

“I do think there are a lot of water access tenants along the Fraser River within minutes of New Westminster that would really benefit from this,” he said. “The fire that we just went through on the Pier Park is probably a good way to kind of sell that while the iron is hot.”

Puchmayr said he isn’t ruling out the purchase of a municipal fire boat, but he’d first want the city to look at partnerships.

“I did inquire a little bit about those types of fires, and would a fire boat have alleviated the damages? I think the answer is yes. Had we have been able to attack that from the water, we could have possibly put that fire out and saved a lot of damage,” he said. “Also, it should be noted that the good fortune of the weather and the direction of the wind – that could have really seriously impacted a lot greater on the river there, and it could have actually affected buildings on Columbia Street and Front Street as well. We were just really fortunate that we didn’t have more damage.”