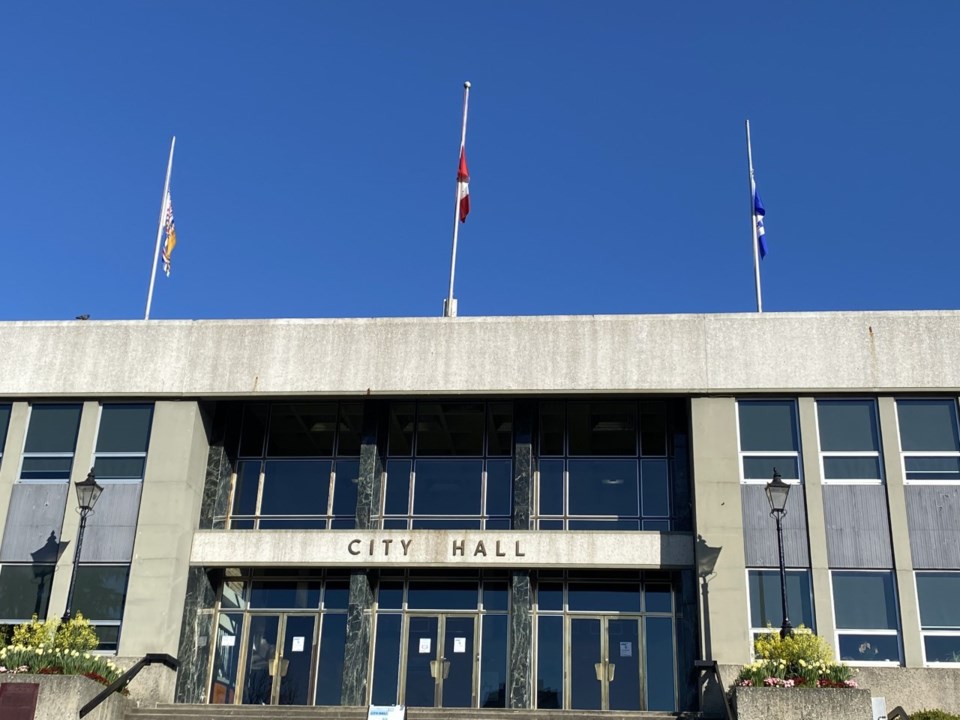 The flags at New Westminster City Hall are flying at half-mast today.Theresa McManus

The flags are flying at half-mast at New Westminster City Hall in recognition of the fifth anniversary of British Columbia’s declaration of a public health emergency for substance-related harms.

Since the declaration was made on April 14, 2016, the BC Coroners Service reports illicit drugs have claimed the lives of at least 7,072 British Columbians.

"Today, we remember and grieve the thousands of people who have lost their lives in B.C. due to a toxic illicit drug supply," Lisa Lapointe, chief coroner, BC Coroners Service, said in a news release. "I extend my heartfelt condolences to all of those who have lost a beloved family member or friend as a result of the unscrupulous and profit-driven illicit drug market. The tragic loss of these thousands of individuals underlines the urgent need for a substantial shift in our provincial and national response to problematic substance use."

A recent staff report to New Westminster city council stated the drug poisoning crisis resulted in 35 deaths in the city in 2020.

Already flying at half-mast to commemorate the April 9 death of the Prince Philip, Duke of Edinburgh, the flags remained lowered on April 14 to recognize the fifth anniversary of the declaration of the public health emergency.

“Like communities across the province, New Westminster has suffered greatly from the opioid crisis. We have lost community members, and many families have faced heartbreaking losses,” Mayor Jonathan Cote said in a statement to the Record. “It is important we mourn these deaths and use this anniversary as an opportunity to call for action locally, provincially and federally to tackle the overdose crisis facing our communities”

"While the COVID-19 pandemic has shown us how, as a province and a nation, we can mobilize and achieve incredible things together, it has also revealed a sadder truth – some dangers evoke more community concern than others," Kendall said in an April 14 press release. "There is a stark and dreadful contrast in how we as a society have responded to the two public health emergencies. 2021 is the year to stop temporizing and take the necessary steps to put an end to this tragedy."

In response to the drug poisoning crisis, New Westminster city council directed staff last July to work with the Fraser Health Authority on the establishment of an overdose prevention site and the implementation of a safe supply program.

On March 29, council approved a temporary use permit that allows the Purpose Society and Fraser Health to operate a health contact centre at 40 Begbie St. Services at the facility include witnessed consumption, drug testing, harm reduction supplies, take-home naloxone kits, training on naloxone, education on safer drug use, a medical clinic, nutritional information, and referral to treatment centres and health services.

On April 14, the province announced it would be moving forward with measures to combat stigma and turn the tide on this crisis.

The province will officially request a federal exemption from Health Canada to decriminalize personal possession of drugs. It’s believed this would remove the shame that often prevents people from reaching out for life-saving help and drives people to hide their drug use, avoid health care and use alone.

While decriminalization is one additional tool in B.C.'s overdose response plan, the province is also committed to increasing funding for a variety of overdose prevention services across the province.