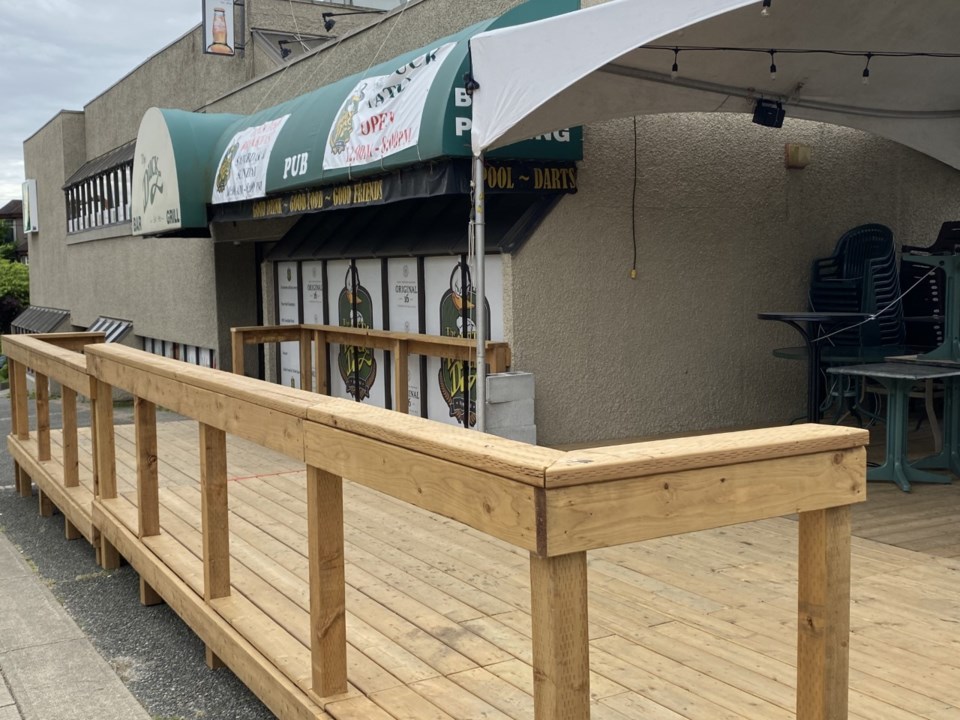 A patio at the Thirsty Duck on 12th Street is one of the temporary patios created in New West since last spring.Theresa McManus

New Westminster is taking steps to ensure its temporary patio program mirrors what’s being permitted by the province.

City council has approved a staff recommendation to extend the temporary patio program until June 1, 2022. It’s also directed staff to bring forward any bylaws that may need to be amended to support the program extension until next June.

To help support local food and beverage establishments during the pandemic and to help create vibrant neighbourhoods, the city introduced a temporary patio program in the summer of 2020 and offered it once again in 2021. The program was set to end on Oct. 31, 2021.

According to staff, the province recently announced it’s extending the program until June 1, 2022, on order to give businesses time to submit applications to convert their temporary patios to permanent patios and to continue to support B.C.’s recovery from COVID-19. Staff recommended the city extend its patio program to June 1, 2022 to “mirror” the province’s timeline.

A report to council stated 21 temporary patios have been approved as part of the program, including 11 on-street patios (one of which chose not to move forward after being approved), eight on private property, one sidewalk patio, and one that’s a combination of sidewalk/private property.

“Over the summer and fall, staff will work with those establishments interested in making their patios permanent and determine the process necessary depending on the individual patio context,” said the staff report.

In addition to extending the program, the city will also continue to waive associated fees for the yearly license fee ($2.50 per square foot) and/or security deposit ($600).

Coun. Patrick Johnstone said he supports the program and believes it’s been successful from a street activation viewpoint.

“I am generally in support of waiving the fees during the trial period, but I think we need to talk about the permanent program and how we are going to allocate and price the use of public space by private businesses,” he said. “I think we want to support this but I also think we have to recognize there is a requirement that we cost recover at least on space used.”

“We are going to be running some numbers to see where that number generally comes out when it’s applied to on-street parking versus the loss of parking revenue,” she said. “That’s the kind of think we will be taking a look at over the next little bit as we look to update our existing permanent program.”

Parking-to-patios plans being pursued in New Westminster
May 16, 2020 8:36 PM
Comments