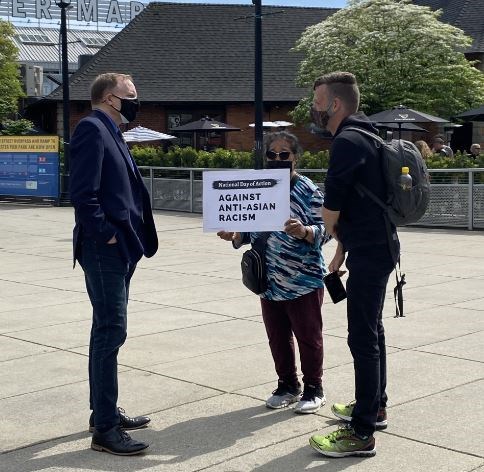 On May 11, Peter Julian tabled motion M-84, which proposes a “hate neutralization strategy” to address the rise in hate crimes in Canada. A day earlier, Julian attended a Day of Action Against Anti-Asian Racism rally in New West.

“We are seeing an increase in all kinds of hate. It is certainly inspired by the activists who are fighting back against anti-Asian hate, but we are seeing a disturbing increase everywhere,” he said of his motion. “So the actions need to be everywhere, there’s no doubt about that, in a very robust way. We can’t just play lip service to this. It’s disturbing. It’s happening, and we need to take action.”

According to the House of Commons’ website, Julian’s motion calls on the federal government to immediately counteract all forms of hate and all forms of discrimination, hate crimes and incidents of hate by:

* working with provinces, territories, municipalities and community-based organizations to put into place a reporting and tracking system for hate crimes and incidents of hate to ensure accurate tracking;

* launching a robust public education campaign across Canada, focused on understanding and behavioural change. The campaign would clearly define inappropriate behaviours, would communicate the terrible impacts of systemic racism and the serious impact of racist actions, gestures and verbal abuse, and would encourage Canadians to stand up for others when someone is being targeted;

* ensuring that comprehensive victim services are available to all those who are victims of hate crimes or hate incidents;

* working to eliminate harmful images and stereotypes present in media and cinema;

* strengthening all legislation against hate and introducing amendments to the Canadian Human Rights Act to ensure that hate speech no longer occurs with impunity; and

*ensuring that all federal government agencies and institutions consider the prevention of discrimination and the promotion of diversity as guiding principles of their work.

While there has been a “very disturbing escalation in anti-Asian hate” since the beginning of the pandemic, Julian said the motion covers all forms of hate.

“It is something that is so important in a free and democratic society, that people not be subject to racist attacks, not be subject to homophobic attacks,” he told the Record. “We need to make sure that every Canadian can feel safe and welcome, not only in their community but right across the country. This is why it’s time to take action.”

Julian said the bill in intended to push the federal government to take action to address hate.

According to Julian, it’s estimated that more than 95% of hate incidences and hate crimes aren’t reported. He said it’s “extremely important” to track incidents of hate.

“If it’s part of an ongoing investigation with the police, they will track it, but in well over 95% of the cases, there’s no tracking at all,” he said. “We know that it has skyrocketed in terms of the number of incidences of hate.”

Julian supports the implementation of a comprehensive public education campaign that gives people the tools to help them intervene and fight back against hate incidents.

“Not all Canadians are understanding of what systematic racism means, the impacts of hate crimes, public abuse,” he said. “These kinds of things need to be absolutely part of a very robust public education campaign.”

“I have seen it in places like stores, where people are reacting and expressing hate, absolutely irresponsible, and I have stepped in and told people to cool it,” he said. “They have stopped, but I think we need to understand where this is happening. We need to have very robust public education campaign. We need, as well, to give tools to people to intervene.”