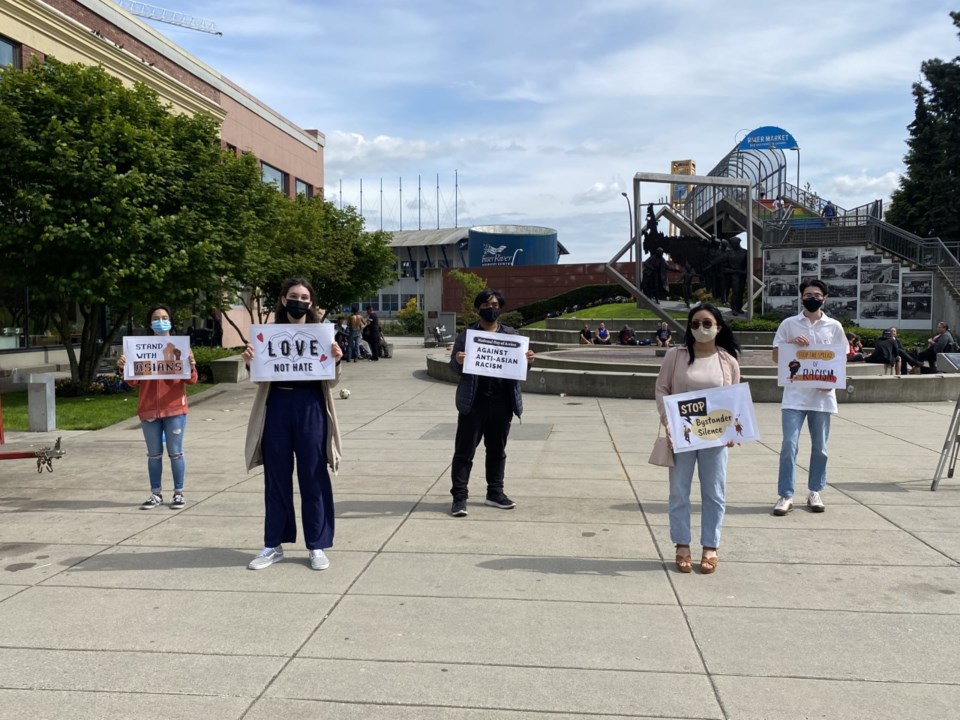 New Westminster Secondary School students were among a small group rallying in Hyack Square on Monday in support of Day of Action Against Anti-Asian Racism.Theresa McManus

New Westminster is among the communities across Canada taking a stand against anti-Asian racism.

Stand With Asians and Love Not Hate were among the signs displayed by residents who attended a rally in Hyack Square on Monday in support of the Day of Action Against Anti-Asian Racism.

Aliyah Apolonia, a Grade 12 student at New Westminster Secondary School, said she’s been on the receiving line of racist comments.

“A few times, actually,” she said. “You would think living in the Lower Mainland you wouldn’t experience it here. It makes me a little shocked.”

Stand With Asians Coalition, a Burnaby-based group that formed in April, has been working to unite municipalities across Canada in acknowledging the impact of anti-Asian racism. The coalition organized rallies on Monday afternoon in New Westminster, Coquitlam, Hope, Mission, Port Moody, Richmond, Surrey, Vancouver and Burnaby.

Doris Mah of the Stand With Asians Coalition contacted Apolonia and asked if she wanted to lead a May 10 rally in New Westminster as part of the National Day of Action Against Anti-Asian Racism.

“Because I am an Asian Canadian living in New Westminster, I thought that would be a really cool opportunity,” Apolonia told the Record. “I also talked to her about how I have seen in a lot of schools there has been Asian bullying, especially with the COVID-19 pandemic.”

Apolonia said it’s “not an uncommon thing” for local students to use racist terms, and she’d like parents to set a positive example for their kids by not using racist language.

New Westminster-Burnaby MP Peter Julian was among a small contingent attending the New West rally. He said it’s critical that people not be subjected to racist attacks.

“We need to make sure that every Canadian can feel safe and welcome, not only in their community but right across the country,” he said. “This is why it’s time to take action.”

Lourdes Dagami was out for a walk with her son-in-law Jeremy Perry when they came upon Monday’s rally. Wanting to show her support, she was soon holding a sign.

“I feel like I am not important,” she said of how some people have made her feel about being Asian.

Perry said his husband has witnessed some anti-Asian behaviours, particularly at the beginning of the pandemic when there was some “COVID is from China” comments.

“In some of those early days, when it was very acute and intense, he noticed if he got on SkyTrain to go to work people would get up and move away from him. He saw that happen a few times,” Perry said. “That really hurt him because he works in health care and he’s going out every day to try and do the best for everyone.”

The City of New Westminster declared May 10 as a Day of Action Against Asian Racism. The proclamation stated that Vancouver has seen a staggering increase of more than 700% in Asian hate crimes in 2020, with B.C. accounting for 44% of the 1,150 cases of racist attacks in Canada last year.

Rachna Singh, B.C.’s parliamentary secretary for anti-racism initiatives, challenges all British Columbians to take action to combat discrimination. He stated that people of Asian descent have been targeted and scapegoated during the pandemic, which has led to increased attacks against them.

"Everyone has a role to play in building a more inclusive province. It starts with us. It is not enough to be 'not racist,' we must be anti-racist,” he said in a news release. “Living in a society steeped in colonialism and systemic racism impacts us all. We each carry prejudices and we must confront them.”

Singh said the provincial government recently launched an anti-racism information campaign to encourage British Columbians to do their part.

“Anti-racism requires something from all of us. It can be a lot of things, but it can't be nothing,” he said. “We must also speak up. When friends, family or co-workers make an inappropriate comment, even in private, don't let it slide. Listen, probe and let them know their words matter.”

The province has proclaimed May 23 to 29 as Anti-Racism Awareness Week in British Columbia.

“We know proclamations alone are not enough and we must back it up with meaningful action,” Singh said. “That's why our government recently increased funding for community groups to respond to racism at a local level. We will be launching a racist incident hotline and we'll be bringing in legislation to pave the way for race-based data collection and B.C.'s first anti-racism act. But we know there's much, much more to do.”

Have your say on the New Westminster school district's anti-racism strategy
May 7, 2021 8:03 AM

New West focuses on the root causes of crime in its submission on police reform
May 7, 2021 7:21 PM