New West thrift shop on the hunt for a new home 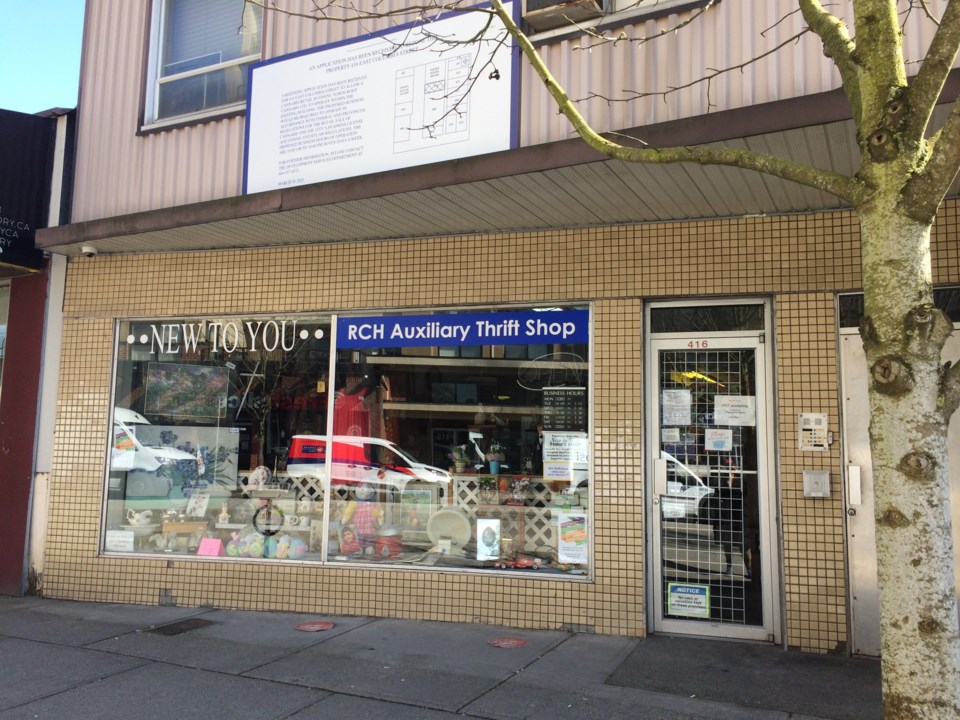 It’s been said that when one door closes, another opens – and that’s certainly the hope for the New to You thrift store.

In letters to city council, some residents expressed “shock” and “anger” about a plan to allow a cannabis retail store to open in the spaces that the longtime home of the Royal Columbian Hospital Auxiliary’s New to You Thrift store. Some supporters urged city council to reject a rezoning application that would allow the cannabis store to open at 416 East Columbia St. but council approved the application at an April 19 public hearing.

Lindy Kirkwood, president of the Royal Columbian Hospital Auxiliary, said the group has known about the proposal to open a cannabis store at the site for a couple of years.

“It’s not an eviction. That’s one word that we feel is unwarranted,” she clarified. “We were not evicted. We were given notice to vacate. We have had lots of people coming in and asking us about it.”

Kirkwood said the auxiliary will vacate the space at the end of August.

“Our managers have been actively looking for a new location for about three years,” she noted. “It’s really kind of just given us a push to find a new location. We want something that is hopefully a little bit more modern, maybe even a bit bigger if that is possible. Ideally, we’d love to stay in Sapperton but if that’s not possible we really hope to be able to stay in New West.”

So far, the auxiliary hasn’t been able to find a suitable new location.

“I am not sure what we are going to do if we don’t find a location by the end of August. That’s kind of my big worry. I think it’s possible; I really believe it’s possible,” Kirkwood told the Record. “We certainly want all our customers and donors to follow us and find us wherever we go. That’s why we don’t want to go too far.”

At the April 19 public hearing, Robert Dick, a lawyer representing the property owner, said his client been wanting to secure a long-term tenant, who pays market rates. He said the thrift store rents the space on a month-to-month basis and pays roughly half the market rate for the space.

“He has been, for a very extended period of time, what I would describe as the largest financial donor to the thrift shop through rates of rent, which are roughly half price,” he told council. “He is not to be chastised for seeking market rents.”

Kirkwood said the thrift store doesn’t have any hard feelings about the need to move.

“We were on a month-to-month agreement. There may have been a lease 30 years ago, but we haven’t had a lease. We knew legally they could have given us a month’s notice,” she said. “I think they have been generous with that and with keeping the rent low.”

Kirkwood said the auxiliary will be paying higher rents at a new location, but still hopes it can find a space that allows it to be even more successful and make more money for Royal Columbian Hospital.

“That’s my hope: that we find a location that works better,” she said.

Kirkwood isn’t surprised by the public’s support for the thrift store, given the ongoing support it receives from the community.

“It doesn’t surprise me one bit that we have these supporters, just because of the people who come and shop and the people who bring donations,” she said. “I am not surprised by it at all. I think it is wonderful, amazing.”

North Roots Cannabis, which will open the cannabis store in Sapperton, has offered to help New to You move to its new location and to pay its security deposit.

The Royal Columbian Hospital Auxiliary raises money for RCH at the thrift store, as well as the lottery booth, the gift shop and a book cart at the hospital. Between April 1, 2019 and March 31, 2020, the group raised $165,000 for the hospital, with the thrift store contributing around 40%.

“It’s huge,” Kirkwood said of the auxiliary’s contributions to the hospital. “In the front of our shop we have a list of the equipment we have purchased.”