Councillors ask city staff to take another look at what it would take to open the popular Sapperton pool this summer, after news that it would remain closed prompted a petition from residents
Mar 30, 2021 9:27 AM By: Julie MacLellan 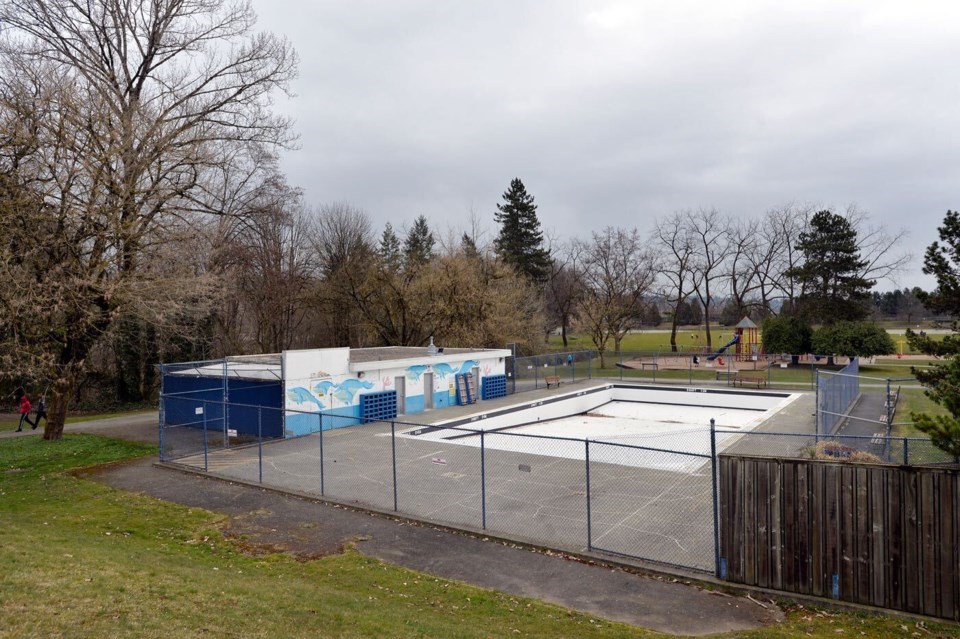 The city is taking another look at plans to keep Hume Park Pool closed for a second straight summer. Jennifer Gauthier

New Westminster city councillors are asking staff to take another look at opening the Hume Park outdoor pool this summer.

Council received a report from parks and recreation director Dean Gibson outlining the city’s plans to keep the pool closed for the second straight summer. The report notes the continued closure of the pool was planned in the city’s 2021 budget in response to a number of considerations, including COVID-19 health and safety requirements, staffing constraints, costs and the need to undertake maintenance – including building roofing work that’s best undertaken in the warm, dry weather.

The report says keeping the pool open in light of likely reduced operating capacity would cost in the ballpark of $220,000 for the typical 10-week operating season.

City council received an online petition (which currently sits at 327 names) asking them to keep the pool operating, noting it’s the only recreation facility in walking distance of Sapperton homes.

“I would like us to find a way of opening the pool,” Puchmayr said, noting the city has been going to “extremes” to try to find ways to keep people moving and using its outdoor spaces through the pandemic.

He said the opening of the Moody Park Pool has met with “huge success” and added he doesn’t want to see the Hume Park pool sitting idle for a second straight year.

Puchmayr asked that parks and recreation staff come back to council with some ideas of how the pool opening could be made possible.

Coun. Jaimie McEvoy noted the size of the pool means the city might need to take measures such as keeping the change rooms closed and having people arrive ready to swim, but he said opening it would be a positive for the community.

Coun. Nadine Nakagawa said she would “very much like” to support the opening of the pool but stressed she needs to see a cost-benefit analysis.

She said prioritizing the Moody Park pool makes sense, given that it’s in a neighbourhood surrounded by high-density buildings where people don’t have access to outdoor spaces. She said the city needs to do an “equity analysis” and ensure it’s serving the people who have fewer options available to them.

“I’m not opposed to opening the pool; I just can’t so enthusiastically say we should do it at all costs,” she said.

Mayor Jonathan Cote, too, cautioned there are a number of challenges associated with opening the Hume Park facility, not the least of which is money.

“This would come at a significant cost,” he said. “Is this going to be good value to the community in terms of the dollar spent per swim?”q

Gibson said staff can go back to the table and provide a more in-depth look at what it would take to open the pool. He told council that, although there are some financial considerations, those haven’t been the only driver behind the decision to keep the pool closed.

He said the required maintenance work and staffing are also challenges.

The staffing shortage – particularly a lack of trained, certified lifeguards – has arisen as a result of the pandemic. For eight months (between March and November 2020), there was no lifeguard training, and only limited training came back after that time. Recertification clinics for current staff have also been in short supply given the high demand for time and space in pools across the region.

Gibson’s report noted future new lifeguards will likely complete their training in late 2021 and early 2022, as COVID-19 operating restrictions begin to ease – not in time for the summer season.

“When we look at those issues and then factor in where we are on the calendar relative to the opening of the pool, I can say right now that it’s very, very tight,” Gibson told councillors. “We may already have crossed the point of no return.”jnmh

Gibson will bring a report back to council in April.