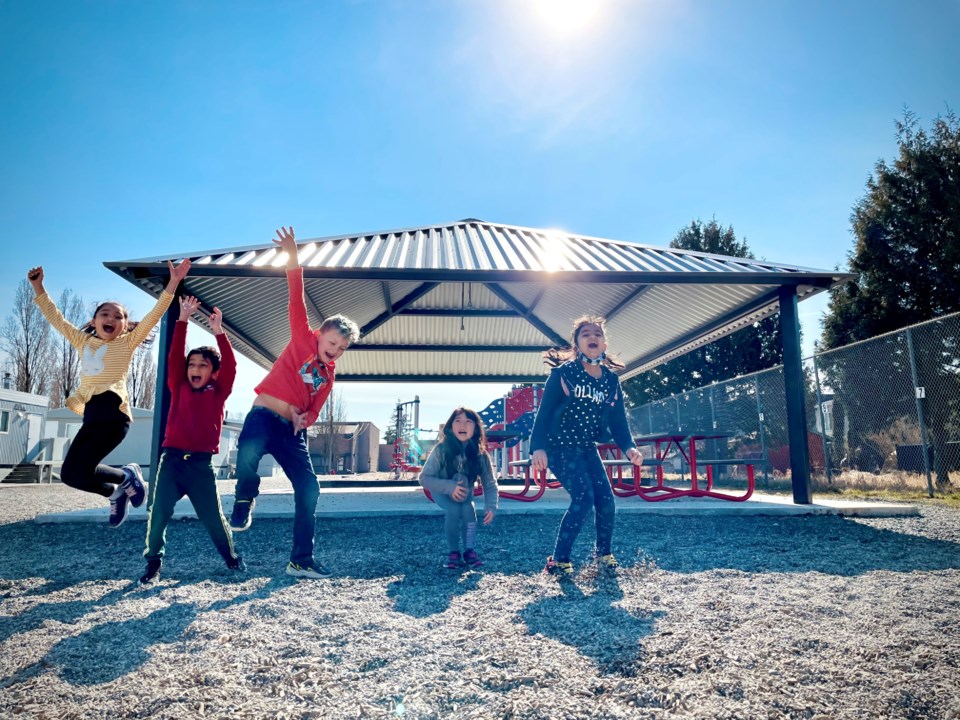 Some of Queen Elizabeth Elementary School’s very excited Grade 2 students jumping for joy in front of their new outdoor covered play and learning centre, one of four such centres installed at New Westminster schools thanks to federal COVID-19 funding.New Westminster School District

“It’s almost like a little bit of a village square,” said school principal Ken Millard, “where people say, ‘We’ll meet you at the covered learning space.’”

Lord Kelvin is one of four New Westminster schools to receive the new outdoor learning spaces, which the school district purchased and installed using federal money that was given to districts across the country to help them deal with COVID-19. The local district received $2.5 million of that money and earmarked $365,000 of it for the outdoor learning spaces.

The others are at Qayqayt Elementary, Queen Elizabeth Elementary and Glenbrook Middle School.

Millard is pleased to have the new space on his school grounds, where it’s located near the portables housing Grade 4 and 5 students.

“They use the outside quite a bit anyway. It’s been nice for them to be able to walk out their door a few steps and have the covered space right there,” he said.

The school’s kindergarteners have also been taking advantage of the space to kick off their regular “Muddy Mondays,” which see the kids gearing up for the weather and then hitting the school grounds or exploring nearby Moody Park. The outdoor learning centre gives them a space to gather at the beginning of their adventure and then regroup at the end to talk over what they’ve learned.

Other classes have been using the space for all manner of lessons – including a recent parachute-making session, where students were able to climb up on the built-in benches to launch their creations.

Each school was able to choose their own furniture for their space, Millard noted, and Kelvin went with permanent benches around the perimeter. That leaves the central space clear for storytelling or speaking to a group, campfire-style.  The school also has folding tables and telescopic stools (like those used for camping and hiking that fold up into discs when they’re not stretched out) for use whenever they’re needed.

Millard noted the space isn’t just used for classes; it’s a play spot for kids at recess and lunchtimes, and it also offers room for just hanging out.

“Whether it’s play for the students or learning for the teachers, it’s now that space everyone’s going to go to,” he said.

Millard pointed out the structure itself is immensely sturdy, made of high-quality steel, with a roof that even includes a sound-insulating lining to muffle the noise from rain on the metal roof above. And it’s been installed on a concrete pad for permanence.

“This is not going anywhere, in any kind of storm,” he said. “It’s certainly a well-designed and well-built structure. We’ll be able to use it for a long time.”

Millard acknowledged this school year has come with its share of anxieties, and he said the biggest missing piece for staff has been the social connection – the chance to just hang out and chat in the staff room or even to just have in-person meetings.

But he said the whole school community has been supportive of each other through it all – and having this new outdoor learning space has brought some new excitement to the air.

“I think everyone has ideas on how it can be used – from the students, the games they can play around it, to the teachers, how they can use it and share it and have a couple of classes come together,” he said.

Millard, too, has caught that excitement.

“I was really excited when it was finished,” he said. “I like it even more than I thought I would.”