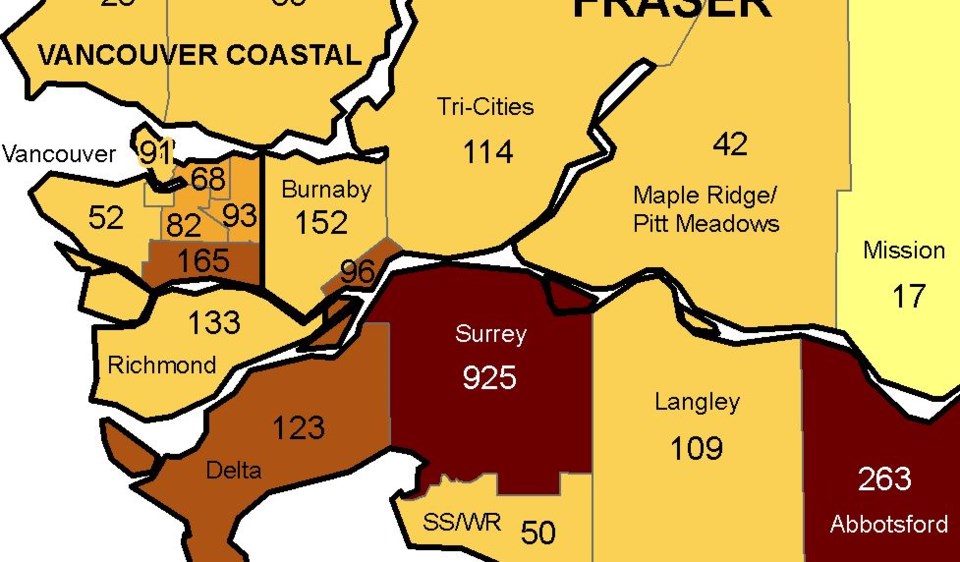 The latest new cases numbers in Burnaby and New Westminster.Screenshot

New COVID-19 cases in New Westminster have jumped significantly, according to the latest data from the BC Centre for Disease Control.

The latest data from the BC Centre for Disease Control show New Westminster had a total of 96 new cases between Jan. 3 and 9.

The number of people actively battling COVID-19 in B.C. fell for the fifth consecutive day, to the lowest total since November 6: 4,624, according to numbers released on Friday.

This number keeps falling as the number of people considered recovered outpaces the number of new infections. While the province detected 536 new cases, there were 712 new recoveries.

The new cases bring the total number of people diagnosed as having the virus, since the first case was detected last January, to 59,608. More than 88.2%, or 52,605 of those people, are considered to be recovered, while the province lost track of 1,341 people who had tested positive and likely left the province.

Unfortunately, seven more people – all seniors, according to provincial health officer Bonnie Henry – died overnight. That brings B.C.'s death toll from the virus to 1,038, since the first death was recorded on March 9. Six of the new deaths were in the Fraser Health region, while one death was on Vancouver Island.