A Record piece about the Massey Theatre's emergence from the pandemic in October earned a finalist's nod for Arts & Culture Writing in this year's Ma Murray Awards. A virtual gala is set for April 29.
Mar 22, 2021 10:07 AM By: Julie MacLellan 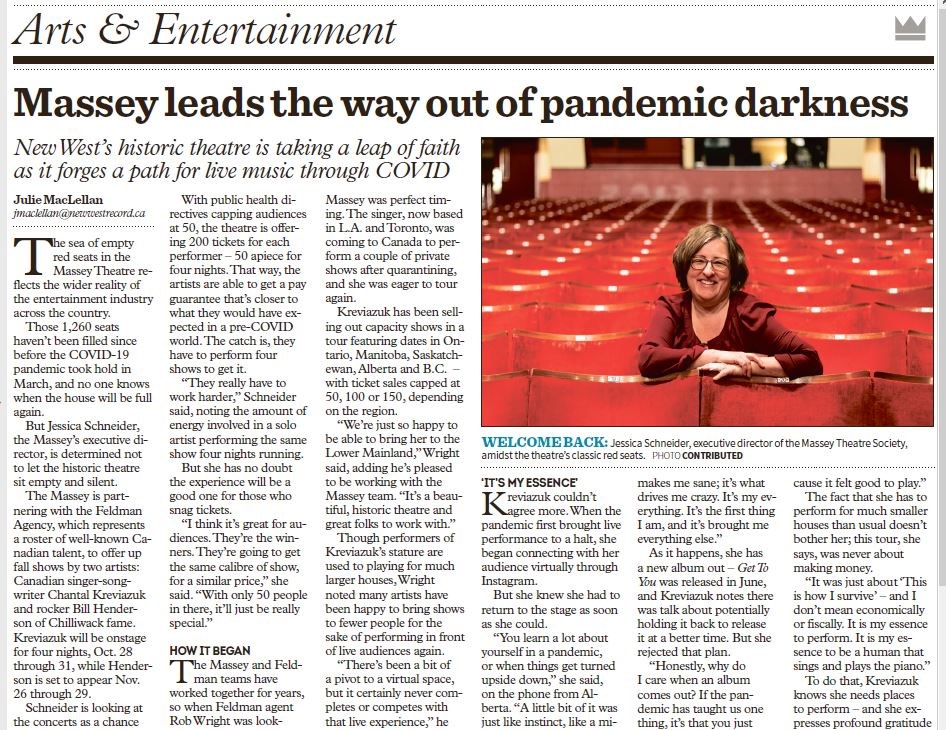 This October piece about the return of live music to Massey Theatre earned the Record a finalist's nod in the annual Ma Murray Awards.Record files

The New Westminster Record/Burnaby NOW newsroom team has captured a trio of nominations for this year’s Ma Murray Awards.

The awards are presented annually by the B.C. and Yukon Community NewsMedia Association to recognize the best work produced by community newspapers around the province.

The New Westminster Record earned a nomination in Arts & Culture Writing, for a piece by Julie MacLellan exploring the Massey Theatre’s emergence out of the pandemic with a return to live music in the fall (before COVID-19 restrictions brought live entertainment to a halt once again in November).

The Burnaby NOW reporting duo of Cornelia Naylor and Dustin Godfrey earned a nomination in the new special COVID Coverage category for their two-part series Loneliness and Loss, exploring the impacts of the pandemic on seniors in long-term care and their families.

Photographer Jennifer Gauthier also earned a nomination for her photograph “Safe Sports,” a shot of a speed skater in training at the Kensington rink in November as local skaters worked to find ways to make their sport work in the face of the pandemic.

Several of the newsroom’s sister papers, including the North Shore News, Delta Optimist, Tri-City News and Squamish Chief, also made the finalists' list.

Awards will be presented at a virtual gala set for April 29.

Loneliness and loss: Burnaby seniors not alone in COVID's isolation crisis
Nov 5, 2020 11:02 AM

Loneliness and loss: The final days of two Burnaby seniors isolated by COVID
Oct 29, 2020 11:05 AM
Comments