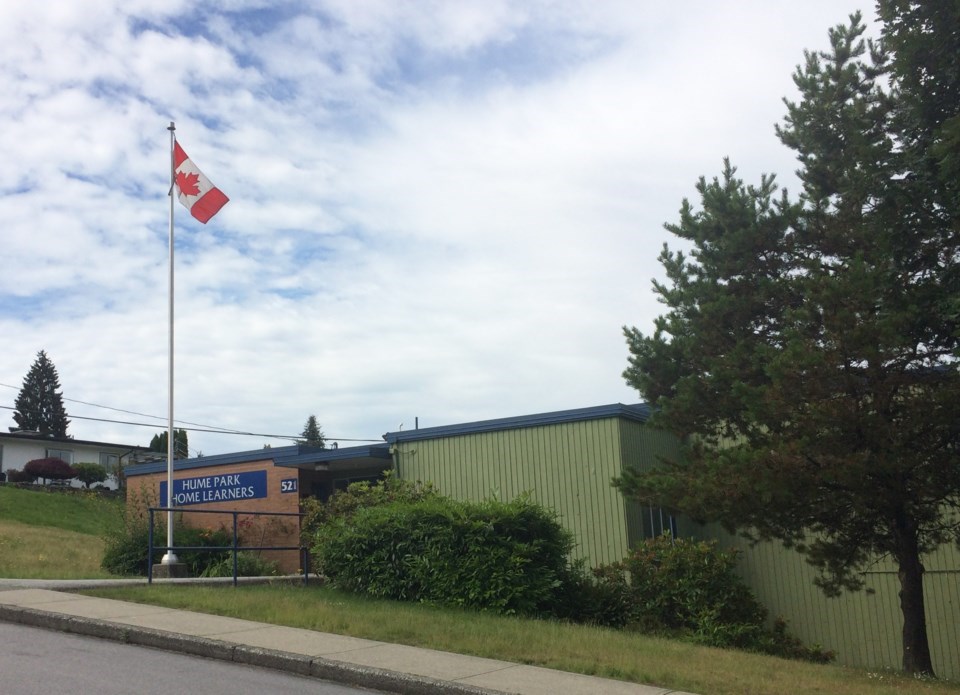 The future location of the New West Home Learners Program, based at Hume Park, is up in the air. A new report on the program, plus the district's alternate RCAP and POWER programs, is coming to school board Jan. 26.Julie MacLellan/Record files

Parents with children in New Westminster’s Home Learners Program have delivered a loud and clear message to the school board: Don’t move our program out of Hume Park.

The future of the Home Learners Program, based out of the former Hume Park School building on Fader Street, hit the school board agenda on Jan. 12. The board’s operations committee received a report on the future of Home Learners, along with the district’s RCAP and POWER alternate programs for high school students.

The report recommended transferring the Home Learners Program to the grounds of Lord Tweedsmuir Elementary School and moving the RCAP and POWER programs into the Hume Park location instead.

The move was proposed because the district’s five-year lease on the Columbia Square Plaza site, where the RCAP and POWER programs are currently located, is coming due in April.  The district has requested an extension to August to finish out the school year but wants to move the program, both to save on the $229,000 annual lease costs and to find a long-term, sustainable home for the programs.

The idea of relocating the Home Learners Program, however, didn’t fly with parents whose children are enrolled in it. They turned out at the Jan. 12 meeting (held virtually via Webex) in force to voice their concerns that the proposed Tweedsmuir location wouldn’t work.

“We are an alternate program. People chose us for reasons, and that is that they’re not participating in regular bricks-and-mortar schools anymore,” said Karen Blackburn, who started the Home Learners Program back in 2002. “Putting us on an elementary school site is not necessarily a benefit to either of those populations.”

Blackburn noted the program, which has about 115 to 120 students enrolled, may be officially a distance learning program but, in fact, the Hume Park building offers programs and activities for families five days a week. Not every child attends the site every day; most students are there two days a week.

Students in kindergarten through Grade 9 come to the site for a variety of teacher-led programs – including outdoor explorations, music and applied skills lessons taking place in the kitchen – and there are on-site programs for parents, as well as a library of learning resources to help parents with their teaching at home.

Teachers work in partnership with parents to design individual learning plans for all the children.

Blackburn said the Hume Park setting provides natural amenities, which are used for the program’s popular outdoor learning offerings, that wouldn’t be available at the West End site.

“To have access to fields at Tweedsmuir and a city park (Grimston Park) pales in comparison to a natural forest, rivers, streams, a watershed, playground, many trails for hiking. … These are all part of our setting; they are all part of our program,” she said.

Rather than force the Home Learners out, she suggested the district consider another option provided in the staff report: renovating the existing district-owned house on Fader Street, across from the Hume Park School building, to use for the other alternative programs. (The school district bought the 0.4-acre lot at 522 Fader St. in 2019 as part of its long-term plans to house a middle school in Sapperton.)

“We could make Hume Park a hub for alternative education, kindergarten to Grade 12,” Blackburn said. “We could have three programs benefit from the park.”

Other parents echoed Blackburn’s sentiments about the Hume Park location, citing its access to the Brunette River and the opportunities for exploring the biodiversity of New Westminster.

Matt Giammarino told trustees that, while he understands the complexity of the issue facing the school district, he doesn’t want them to think of Hume Park as a “distance learning” school.

“Hume Park is, in fact, a combination of the physical plant, the social people and the unique location,” he said. “It just doesn’t exist anywhere else.”

“My strong preference is that we stay at the building in Hume Park because of what Hume Park offers and because of what that particular facility creates in terms of building community among the parents and staff and kids. … I feel like it’s a jewel, and right now, I feel like, don’t mess with a jewel.”

Leanne Ingram, who has two children in the Home Learners Program, pointed out that many of the students enrolled there have diverse learning and behaviour needs.

“Some of them have been marginalized and bullied, and they cannot thrive in a busy public school environment where they’re sharing space with a lot of other students,” she said.

She told trustees her youngest child has diverse needs and faced discrimination in the public school setting.

“The Hume Park School building itself is a safe environment for her. I never need to worry about her there,” she said. “To uproot this beautiful and diverse program would cause harm, I can say unequivocally, to both of my children.”

Since that meeting, the school district has hosted virtual townhalls with parents from both the Hume Park Home Learners Program and the RCAP and POWER programs.

Superintendent Karim Hachlaf, in an interview with the Record Thursday, said the school district fully understands the Home Learners Program is not a conventional “distributed learning” program and that the Hume Park site is unique.

“There’s no question they can benefit from the Hume Park location,” he said.

Hachlaf said parents at the RCAP/POWER townhall expressed a need for a stable, long-term location for those programs. He also noted the existing location – which the staff report pointed out is located near both a liquor store and an adult store – isn’t considered suitable.

“We definitely feel it is less than an ideal learning environment,” he said. “We want to meet the needs of our vulnerable families and give them a long-term location to meet their needs that is not on a short-term lease and that can also secure the home that they deserve. …

“It’s just not sustainable or fiscally responsible to think that the Columbia Square lease is the right option.”

Hachlaf stressed the report that went to the operations committee on Jan. 12 is part of a staff review of the district’s alternate and continuing education programs and that it does not mean a final decision has been made.

Another report will be coming back to the full school board on Tuesday, Jan. 26, and it will look at the options for both the Home Learners Program and the RCAP/POWER alternate programs.

And “portable,” he noted, doesn’t just mean a one-room classroom as people are used to seeing on school sites.

“We can combine portable units into one space, make different configurations, fully equipped with bathrooms, kitchen,” he said.

Doing so would require applying to the city for a temporary use permit for the site, which could mean a three- to six-month process.

“If indeed that’s the direction (the board decides on), we’ll take the time we need,” he said. “In no way are we going to use any time pressure from a lease to fast-track a decision. We are sincere in listening to the input, and if we need to take additional time to meet the needs of the programs, we will do so.”