Nineteen days of filming have brought new life – and a little extra money – to the vacant school building
May 27, 2021 6:05 PM By: Julie MacLellan 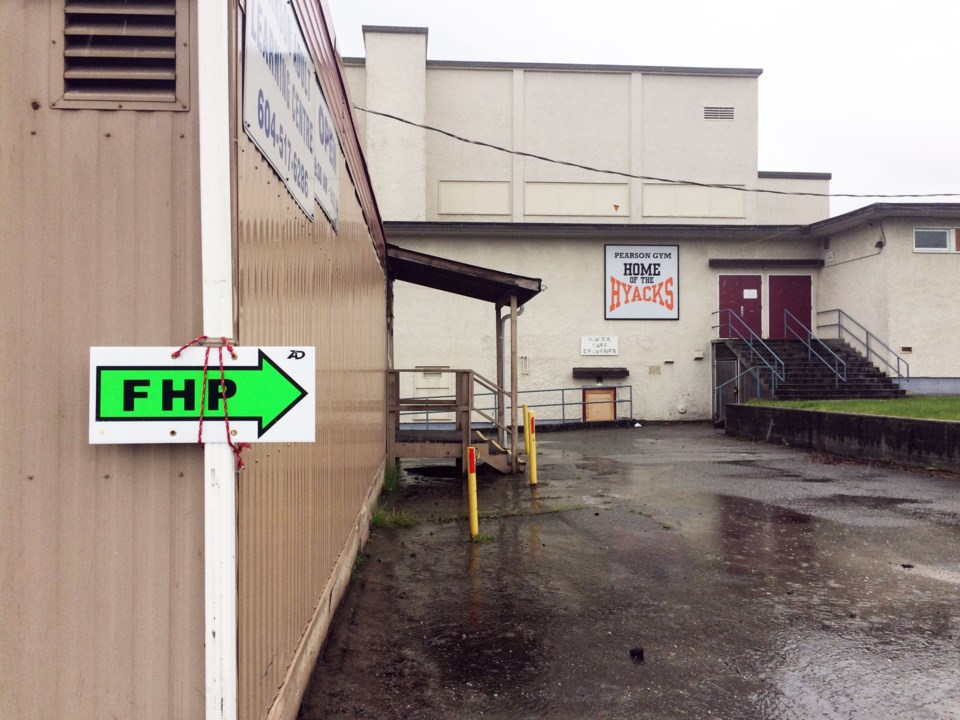 Signs of filming at the old New Westminster Secondary School. The old school building has been used by a number of television production crews since the new facility opened in January.Julie MacLellan

The large, rambling structure that spans the blocks between Eighth and 10th avenues along Eighth Street housed generations of local teens, dating as far back as 1949, before it was finally closed in December 2020.

Today’s students now attend class in the shiny new NWSS facility on the Sixth Street side of the school property.

But the old building hasn’t been entirely unoccupied since January.

Instead, it’s found a temporary new life as a home for television production crews.

Over the past three months, the old school building has hosted 19 days of filming.

Among the crews have been those belonging to a small independent film titled Slump and another indie film that’s billed as a coming out/coming of age story. Larger, mainstream productions have also made their way to the school; watch for the old building in episodes of Superman and Lois, A Million Little Things, The Babysitters Club and Turner & Hooch.

The school district notes all production crews are required to follow applicable COVID-19 health and safety protocols and WorkSafeBC guidelines when they rent space from the district.

Those rental agreements have provided a small boost to the school district’s coffers this year.

Though the district says it can’t disclose the details of filming contracts, it did note in a 2020/21 budget update provided in May that “community use of facilities” had generated higher-than-expected revenue.

Normally, the district would bring in revenue from renting out rooms for birthday parties and other events or to community groups such as Girl Guides. With those rentals off the table due to the COVID-19 pandemic, the district has had relatively few ways to make money from facility rentals this school year.

At the May 11 school board meeting, secretary-treasurer Bettina Ketcham said the district provides rented space to its child-care providers for on-site care at schools, but that space is provided on a cost-recovery basis only, not as a money-maker.

Of the $23,000 boost to the district’s balance sheet, Ketcham’s report noted: “Rental to movie companies at old NWSS have created a rebound of revenue over amended budget expectations.”

Meaning that not only have the hallowed halls of the old NDub been immortalized on screen, but those appearances have generated a little extra money for the district in a tough budget year.

How long the old school will be available for film crews, however, remains to be seen. Plans for the demolition of the old building are now underway.

In response to an inquiry from the Record about the demolition timeline, the school district says there are a number of “logistical pieces” still to be finalized that will affect the date, but the process is expected to begin this summer.