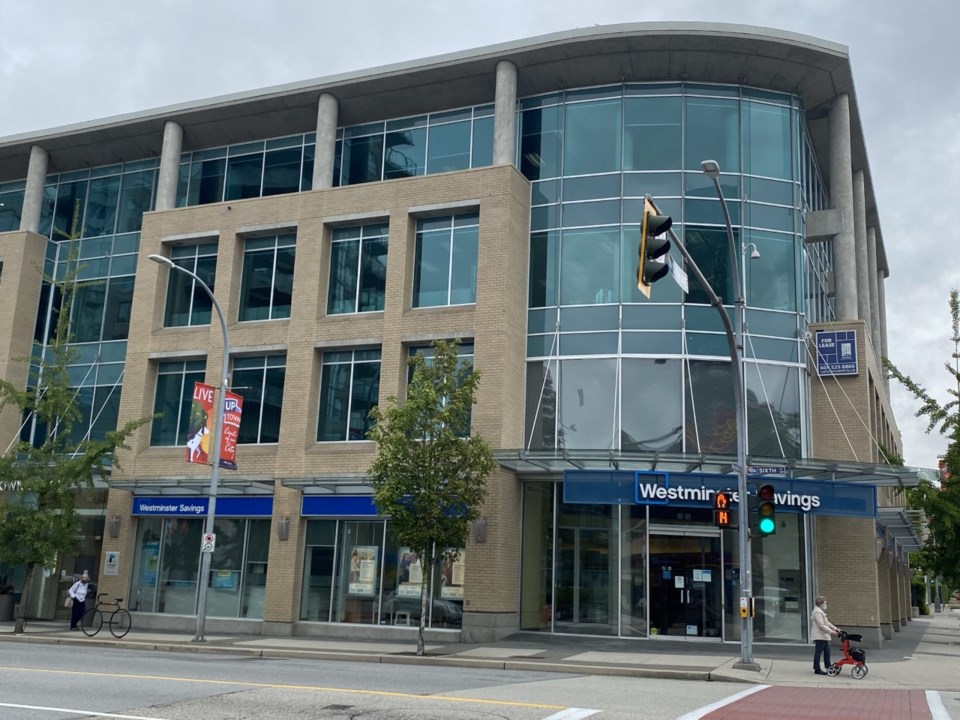 A proposal to eliminate the two-storey atrium in Uptown Centre requires variances to the city's parking requirements.Theresa McManus

The Uptown Property Group wants to remove the two-storey atrium in Uptown Centre.

The corner space in the building at Sixth and Sixth includes a two-storey atrium. The space is currently occupied by Westminster Savings/Prospera Credit Union, which is relocating to a new location on Sixth Street later this year.

A report to council says the atrium space in Uptown Centre is no longer viable, so renovations are required to make the space suitable for new tenants.

“The current occupant is moving to smaller retail space. The space, as it is currently designed, is considered functionally obsolete, and changes are required to attract new businesses,” said the applicant in a letter to the city. “In order to make the existing space suitable for new tenants, the ground floor will be fully separated from the second floor, and the two floors will be leased separately. The ground floor (at street level) will remain retail space. The second floor will be office space.”

However, adding floor space to the building’s interior, by extending the second floor to close the atrium, means the 2001 building’s parking will no longer meet current bylaw requirements.

Uptown Property Group has applied for a development variance permit that would vary the minimum number of accessible parking, loading and short-term bicycle parking spaces from what’s required in the zoning bylaw.

Under the current proposal, the number of accessible parking spots would remain at two, which is two fewer than what’s required. Six short-term bicycle spaces are proposed, and while none currently exist, 23 are required under current zoning.

Coun. Nadine Nakagawa said she’s generally open to these types of variances, but is concerned about waiving the requirements for things that are most needed, such as accessible parking spaces.

“While I recognize that this is the uptown neighbourhood and there are other parking lots nearby, it feels to me like waiving accessible parking, I guess I am just not really keen on it,” she said.

“We were comfortable with the variance,” she said. “Having said that, I appreciate what you are saying; normally this wouldn’t be something we would consider either, but in this case it seemed like an acceptable request and we decided to proceed with the recommendation in the report.”

Coun. Jaimie McEvoy said it can be inconvenient for people to be unable to park right at the building they’re going to, but it can actually cause pain or be a hardship for people who have a disability.

“It’s two accessible stalls for six, so it would be the loss of three normal stalls to achieve one accessible stall,” said Emilie Adin, the city’s director of development services. “That is certainly something that we could go back and look at.”

New West aims to bring a little post-pandemic joy and whimsy to the community
Jun 8, 2021 2:56 PM