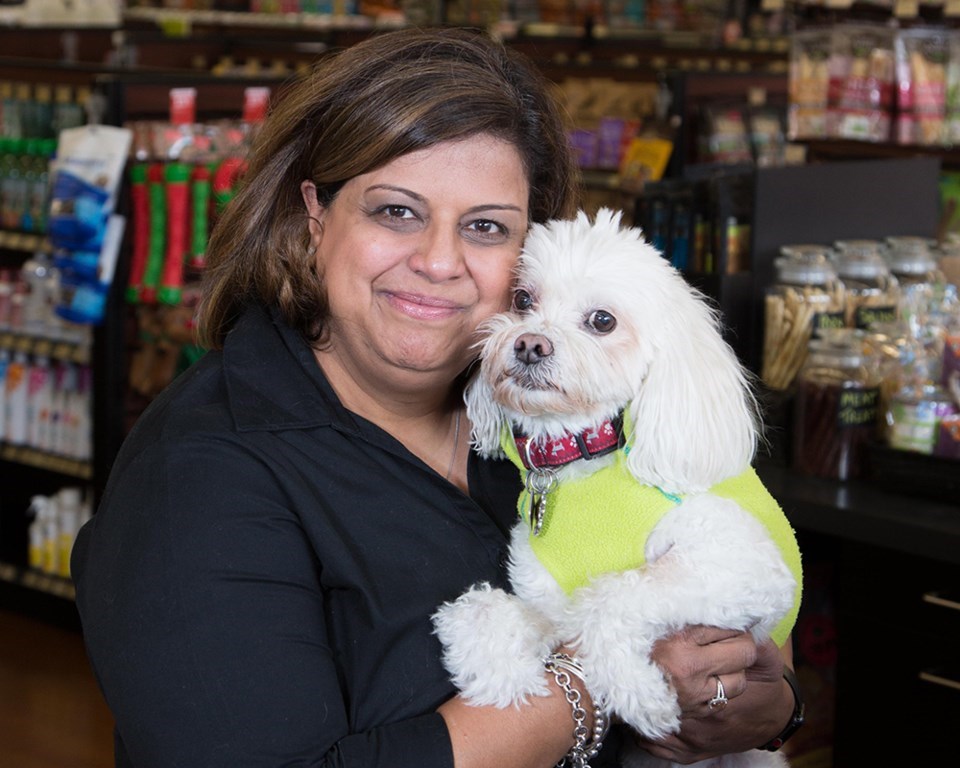 Bosley’s By Pet Valu is celebrating its 10th anniversary in New West by giving back to the community – something it’s been doing since opening its doors in Columbia Square.

Karima Jivraj, who opened her Bosley’s store on March 5, 2011, has big plans for her store’s anniversary celebration.

“I always imagined celebrating with a huge bash, a Bollywood themed party,” she said. “But given the current pandemic restrictions I realized that wouldn’t happen and I needed to get creative.”

Instead, Jivraj is thanking her customers, neighbours, supporters and vendors by creating a week of safe celebration at her store. She’s also planning to give back to the community that’s supported her business for the past decade.

“Our store has felt the impacts of the pandemic, but we have been able to stay afloat,” she said in a press release. “Many businesses and organizations have been hit much harder, and I wanted to give them a boost while providing a way to say ‘thank you’ to my customers.”

Bosley’s is also hosting a social media contest where participants will be eligible for locally-sourced prizes.

The grand prize, valued at $865, features a two-night stay for two at the Inn at the Quay, dinner for two at Piva Modern Italian, breakfast for two at Angelina’s, lunch for two at Tre Galle Gelato, a beer tasting for two at Steel & Oak and a $100 gift card to Bosley’s. Second prize features gift cards totalling $450 to local businesses (Taverna Greka, Steel & Oak, Origins Chocolate, The Refill Stop, Good Omen, Mila + Paige, Bunches and Blooms and Bosley’s) and the third prize is a Blue Buffalo gift basket and two cases of Petcurean food.

Recognizing that many people and their animals have been struggling this past year, Jivraj has partnered with suppliers First Mate and Petcurean to send 5,000 pounds of food to remote B.C. communities through Wild West Animal League.

“This food is a godsend to remote communities who already face so many barriers, especially this year. Some of them are a day’s drive away from a vet or pet store, and have gone through months without access to either,” April Fahr of Wild West Animal League said in a press release. “This is a tremendous gift, especially heading into kitten season.”

Supporting responsible rescue has always been a priority for Jivraj.

In the past decade, she has raised more than $70,000 and donated 30,000 pounds of food and supplies to animal welfare organizations. The majority has gone to New Westminster Animal Services, but other recipients have included Little Paws Rescue, Lower Mainland Humane Society, Straight Outta Rescue, Wild West Animal League and others.

Jivraj, who has been twice nominated for New Westminster Business Person of the Year, and her Bosley’s team have helped adopt out more than 250 pets by housing adoptable pets in the store and helping to promote adoption.

In 2019, Bosley’s by Pet Valu in Columbia Square won a Canadian Pet Community Award’s Chain Store Retailer Award for Western Canada. The awards recognize industry officials who go above and beyond what their jobs call upon them to do, in areas including public education on pet care and responsible pet ownership

Located at 114-1015 Columbia St., Bosley’s has a number of COVID-19 protocols in place, including masks, sanitizer and physical distancing.