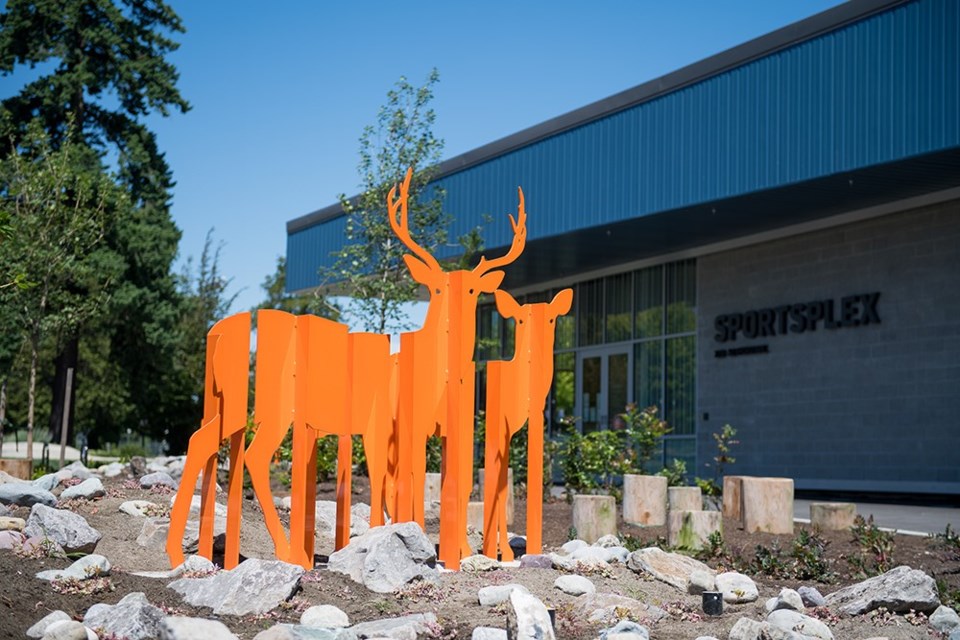 Welcome to the Zoo is a new public art installation outside the Queen's Park Sportsplex.Contributed

Coyotes and squirrels are about as wild as it gets in Queen’s Park these days, but bears and cougars once called the park home.

That part of the park’s wild history is now highlighted in Welcome to the Zoo, the newest addition to the City of New Westminster’s public art collection. Created by Vancouver-based artist Nathan Lee, the installation consists of four sets of deconstructed powder coated steel animals, ranging from 2.4 to 7.2 feet tall, placed within raised planter beds.

In the early 1900s, Queen’s Park was home to a zoo where folks could see animals, including bears. Welcome to the Zoo is located outside the Queen’s Park Sportsplex.

A press release from the city says visitors can enjoy the artwork from multiple perspectives as they sit and move through the plaza space near the entrance to the Sportsplex. The city states “this timely installation explores the interesting relationship that early settlers had to wildlife and re-contextualizes it within our modern world.”

“With lockdowns across the globe, CO2 emissions have dropped off and nature has reintroduced itself into our cities,” said a statement from the artist. “This is a unique time for reflection and a rare opportunity to reexamine our current relationship with the natural world.”

The $5.9-milion, 12,000-square-foot Queen's Park Sportsplex opened in November 2020. It provides space for activities such as gymnastics, trampoline and ball hockey, which were offered in the Arenex before it was destroyed when its roof collapsed under heavy snow in December 2016.

“The artwork draws attention to the impact that human activity has had on the natural world and perfectly aligns with the driving principles behind the construction of the Sportsplex around environmental sustainability,” Mayor Jonathan Cote said in a news release.

Coun. Mary Trentaude, council’s representative on the public art advisory committee, said “this beautiful and thoughtful artwork affirms our belief that public art speaks not only of our past but projects our vision for the future.”

A July 2020 staff report stated council had approved a $100,000 budget for the Queen's Park Sportsplex public art project, with funds coming out of the public art reserve fund. That included $85,000 for the commissioned work, including artist fees, studio overhead, contractor fees, artwork fabrication, site preparation, installation and liability insurance, as well as a $15,000 contingency.

"The sculptures reference a specific history of the park, namely the Queen's Park Zoo that once existed on the site," said the report. "The sculptural components are segmented. At an angle they read as abstract sculptures, but as the viewer circulates around each piece, the full animal figures come into focus. The final works, which will range from 2.4 feet to 7.2 feet, will be situated in various locations in the raised planters installed around the Sportsplex plaza."

Community members are invited to attend a virtual unveiling and discussion that’s being hosted by the Arts Council of New Westminster. It’s taking place on Saturday, July 10 at 11 a.m.