May Day, density and traffic have been known to get under the skin of locals, but council candidates kept calm while tackling these – and other – topics at Tuesday’s all-candidates meeting.
Oct 3, 2018 3:05 PM By: Theresa Mcmanus 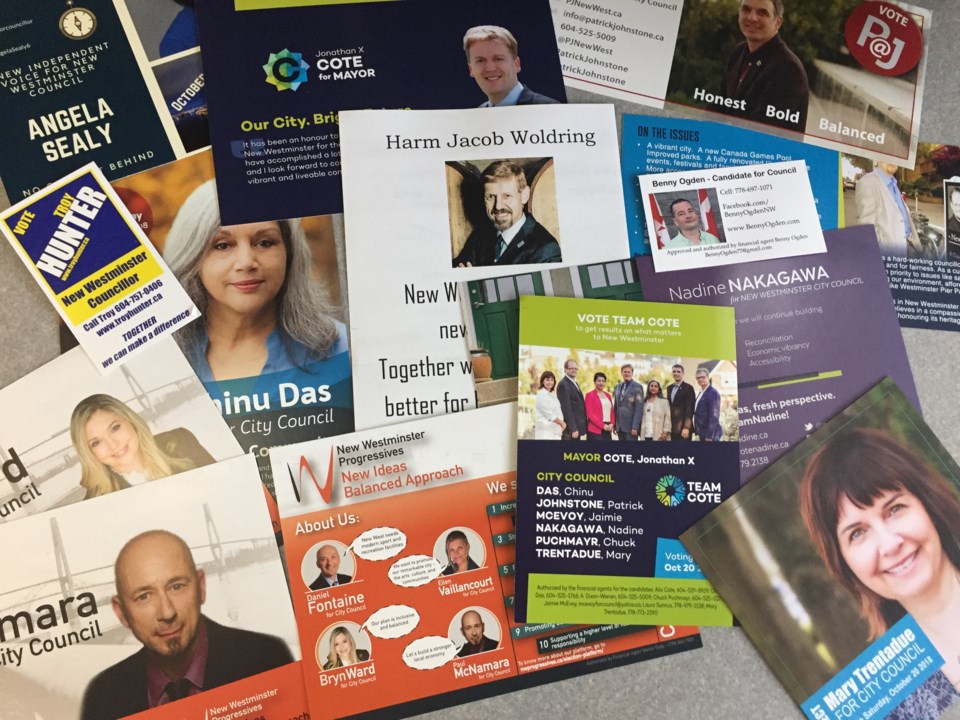 All 14 New Westminster councillor and all four mayoral candidates attended Tuesday's all-candidates meeting hosted by the Moody Park and Glenbrooke North residents' associations. Along with answering questions during the meeting, candidates brought along some campaign literature for folks to read.

May Day, density and traffic have been known to get under the skin of locals, but council candidates kept calm while tackling these – and other – topics at Tuesday’s all-candidates meeting.

Council candidates fielded questions about a wide range of issues, including housing, business promotion, traffic and May Day, at the meeting hosted by the Moody Park and Glenbrooke North residents’ associations.

"My take on May Day boils down to old traditions, new traditions, because more than 40 per cent of the population of New West is now immigrants and visible minorities, and find the balance of maintaining the traditions, as well as the expense,” said Chinu Das, a Team Cote candidate. “I think we need to know who is going to pay the bill and how we get that population who is not engaged right now involved in what is the old tradition.”

Incumbent councillor Jaimie McEvoy said May Day has changed and will continue to change with the times, but it is part of the city’s charm.

"That era doesn't necessarily speak to my personal heritage, but it does speak to me as a New Westminsterite,” said McEvoy, a member of Team Cote. “We are a town that has some interesting traditions, and our city council supports that tradition to the tune of $30,000 a year.”

"I also think there should be an element of diversity in that – engaging community to go out and see how we can make that for the 21st century, what that might look like. So engaging our new immigrants, our artists in the community, our school children,” she said. “I also think it's really unfortunate that the May Queens are no longer escorted by the Lancers. That is also part of the tradition.”

Bryn Ward, a New West Progressives candidate, said May Day and city traditions are one of the main reasons she’s running for council.

“I can't tell you how close it’s been in the last few years that May Day has almost been voted to be stopped,” said Ward, present of the Hyack Festival Association. “I can't tell you how much the Hyack Festival Association has been suffocated with funding. If I did not pay for that float – $15,000 out of my pocket this year to represent our city to bring in revenue – we wouldn't have had one. I think it's wrong. It's time that the citizens know what is going on.”

Housing and development continue to be major issues in the 2018 election campaign.

Independent candidate Mike Ireland said there no getting away from densification, but it needs to be better planned.

Incumbent councillor Mary Trentadue believes density should be spread out throughout neighbourhood and can’t all be in highrises. She said townhouses, laneway and carriage homes are good ways to increase density in the city.

Paul McNamara, a New West Progressives candidate, said the city can’t solve the issue of affordability on its own and needs to engage with developers, and business and community groups to tackle the issue.

Incumbent councillor Chuck Puchmayr said the city has taken a number of steps to encourage purpose-built rental housing and to help renters who are being renovicted. Puchmayr, a member of Team Cote, said the city is working with the provincial government on legislation to prevent renovictions.

It wouldn’t be an all-candidates meeting in New Westminster if traffic and roads didn’t arise as an issue.

"Right now we have roads that are actually parking lots,” said independent candidate Angela Sealy. “My personal wish and desire is to see a regional strategy around traffic in general.”

Incumbent Team Cote councillor Patrick Johnstone said the city has boosted its pavement management budget from less than $1 million a year to nearly $4 million annually to improve roads. While roads are important, he said his priority is to make sure roads and pedestrian spaces are safe and comfortable for all users, including cyclists and pedestrians.

New West Progressives candidate Daniel Fontaine said he would also be encouraging walking and cycling infrastructure over the road network, but noted the city has to ensure that cycling initiatives work with cars.

Independent candidate Benny Ogden said some roads in the city need to be widened, and improvements are needed to some sidewalks so they’re more accessible and not dangerous to pedestrians.

Nadine Nakagawa, a member of Team Cote member, supports a number of initiatives to bring the community together, including retaining the Q to Q Ferry, holding more council meetings in the community, developing retail districts in neighbourhoods and providing more resources to residents associations. She’d also like the city to create community hubs by partnering with community organizations to offer more services and community amenities.

On the business front, independent candidate Troy Hunter said he’s like fibre network to be expanded throughout the city and see some high-end retail stores come to New Westminster so tourists and others want to come to the city.

Bell is concerned about issues such as city spending, traffic and loss of the city’s tax base as industry has left the city.

Binn is concerned about the city’s livability and the need to provide amenities for a growing population.

“I would like to start the rebuilding of the Arenex, a new pool,” she said of goals she would pursue in the first 90 days of office. “I would also start by trying to have time frames where the trucks are not allowed on the Pattullo Bridge, cutting through our city and blocking our traffic.”

Cote’s priorities are housing, a strong local economy and investment in community facilities that citizens love. On the housing front, he said the city needs to look at every policy possible to help address affordability, find partnerships with non-profits and senior governments, and implement exclusionary zoning so all new developments have a certain percentage of nonmarket housing.

If he’s re-elected, Cote said he would get to work immediately on implementing ideas in his 50 ideas in 50 days platform, which includes items relating to housing, transportation and community amenities.

Woldring’s first move if elected mayor would be to freeze the wages of all non-union city employees.