The Massey Victory Heights Residents Association is anticipating a lively discussion at its September meeting.
Sep 24, 2014 2:09 PM By: Theresa Mcmanus 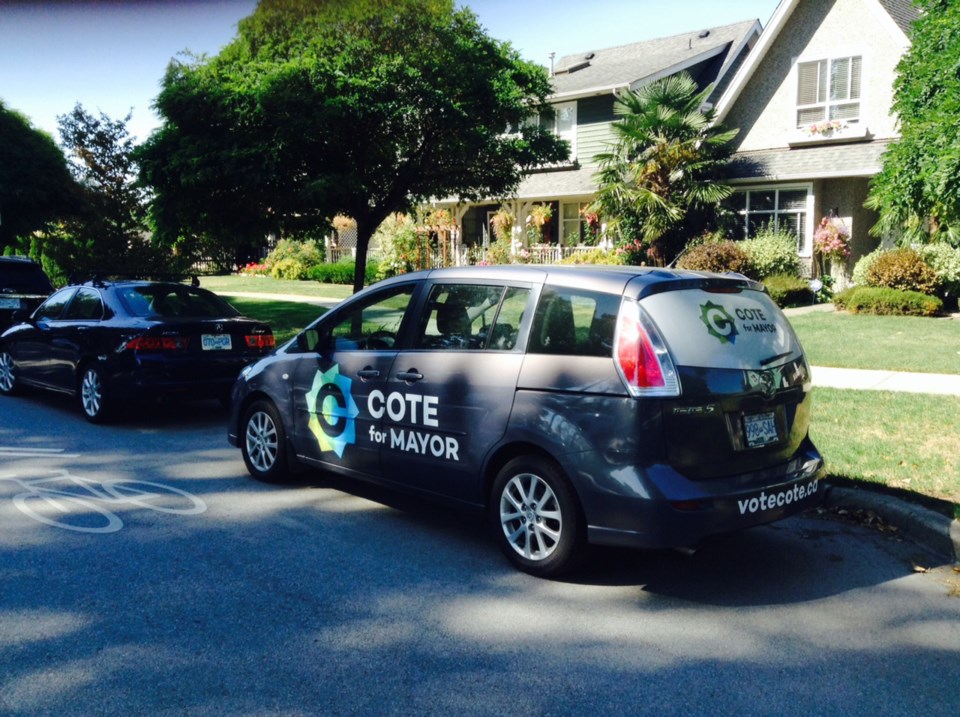 On the move: New Westminster mayoral candidate Jonathan Cote is using the Cote mobile to draw attention to his bid to become mayor.Contributed

The Massey Victory Heights Residents Association is anticipating a lively discussion at its September meeting.

The residents association has invited all candidates who have declared they’ll be running for office in November’s civic election to attend its Sept. 25 meeting. As of The Record’s press time, the group said mayoral candidates Jonathan Cote and Wayne Wright were set to attend, as was council candidate Patrick Johnstone and school board candidates Jonina Campbell and James Janzen.

Jason Lesage, president of the residents association, said he’s emailed all of the current elected officials to inform them that he’s invited all declared candidates to speak at the meeting. If they declare before Sept. 25, they’re welcome to attend.

“Just for some context, we’re not holding a debate. I’m framing this as a “conversation” with residents,” he wrote in an email to The Record. “Each candidate will say a few words of welcome and their vision for the city (two or three minutes max), and then it’s over to the residents to ask questions. I’m going to moderate to ensure that no one hogs the airtime and that the conversation isn’t just focused on one issue.”

Prior to running for city council, many candidates are involved in their local residents association.

New Westminster voters will be electing one mayor, six councillors and seven school trustees in the Nov. 15 civic election.

Nomination forms are available on the city’s website or at the reception desk at New Westminster city hall. Anyone who is a Canadian citizen, 18 years of age or older on general voting day, a resident of B.C. for at least six months immediately before the day nomination papers are filed and hasn’t been disqualified from being an elected official or holding office (under the Local Government Act or any other enactment) is qualified to run.

Mayoral candidate Jonathan X. Cote is on the hunt for ideas about how to improve the Royal City and on the move around town.

Cote has launched an “Ideas” page on his campaign website as he believes it will provide an opportunity for New West residents to contribute their ideas on how to build a brighter future for New Westminster. He’ll use the feedback to help develop his policy platform.

“I believe strongly in community engagement and I wanted to make sure my campaign provided residents an opportunity to participate in my platform development,” he said.

The page – located on www.votecote.ca – includes questions that cover a broad range of topics including affordable housing, transportation, the local economy and community facilities.

Along with seeking input from community members, Cote is also urging people to keep an eye out for the Cote Mobile Version 4.0. Cote’s car is sporting a new logo and wrap, which was produced by local company CanWrap.

Do you have an election item for The Record? Send it to tmcmanus@royalcityrecord.com