Independent candidates vying for seats on New Westminster city council came up empty-handed in the 2014 civic election. All six of the councillor positions went to candidates who had been endorsed by the New Westminster and District Labour Council.
Nov 16, 2014 12:07 AM By: Theresa Mcmanus 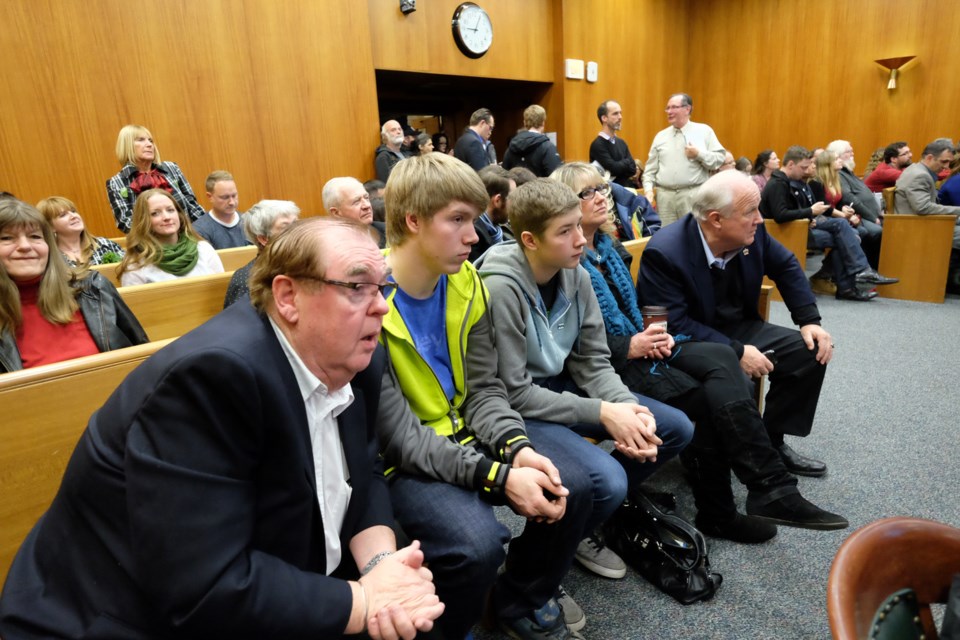 All six of the councillor positions went to candidates who had been endorsed by the New Westminster and District Labour Council. All four incumbents – Chuck Puchmayr (6,262 votes), Lorrie Williams (6,087 votes), Jaimie McEvoy (5,835 votes), and Bill Harper (5,634 votes) – were re-elected, while two new spaces were filled by labour-endorsed candidates Patrick Johnstone (5,582) and Mary Trentadue (5,517).

Independent candidate Catherine Cartwright was next in line with 5,165 votes, followed by Tej Kainth at 5,111 and Calvin Donnelly at 4,394.

“I guess slate politics works. It looks like a slate to me from these numbers,” said Donnelly, a former councillor. “The voter speaks. That’s how it is. We have to do the best with what we have.”

Cartwright placed seventh in her first attempt at winning a seat on city council. “I am disappointed that voter turnout didn’t get higher, and I am disappointed that it’s a complete sweep,” she said. “With all the talk of wanting independence and that kind of thing, they are still there. I fear for our city’s finances. I think they are going to be reckless with money.”

Although candidates talked about the need for balance at city council, that didn’t translate into votes at the polls.

“I can’t tell you what happened because on the street it resonated,” Cartwright said. “Maybe it’s who came to vote and who didn’t?”

While Woldring thinks independent candidates provided another perspective on city issues to the debate during the campaign, he said it was no match for the money provided by labour.  He said unions contributed more than $30,000 to local candidates in 2011 and expects that figure to soar in 2014 because the New Westminster and District Labour Council endorsed a mayoral candidate and six councillor candidates.

Woldring, a downtown businessman who got 1,610 votes, believes a sweep by the labour-endorsed council candidates will be “a disaster” for the city and business in the city. While business had somewhat of a voice with former Coun. Betty McIntosh and Mayor Wayne Wright, Woldring fears that balance will be gone.

In addition to financing of election campaigns, Woldring also thinks there’s a need for term limits in civic politics.

“There should be term limits, especially with four-year terms,” he said. “Two terms and you are gone. You shouldn’t be sitting on city council for 20 years, the same with school board.”

First-time candidate David Brett, who placed 10th in the council race, echoed the comments of other candidates who weren’t endorsed by the labour council.

“I am disappointed but not terribly surprised that the slate got in,” he said. “As the race went on it was apparent there were overwhelming resources, in terms of budgets, advertising, the kind of coordinated campaign.”

According to Brett, first-time candidates were “squired about town by the NDP brass” and introduced to the community.

“Nevertheless, I had a great time running,” he said. “I enjoyed it. I love politics. It was a lot of fun meeting people on doorsteps and figuring out what people are really concerned about.”

While “dire consequences” is a bit too strong of wording, Brett thinks New Westminster will suffer by having elected a full council of labour-supported candidates, particularly in its relationships with senior levels of government.

“I think he brought a pro-business, can-do attitude and kind of carried the rest of the council on his shoulders,” he said. “I have heard some of the people on the labour side even say themselves they fear group-think. When you have too many people in strong agreement, you can come to believe the direction you are going is right. If you don’t have any skeptical voice at the table, things can go wrong.”

New Westminster councillor candidates bring their A Game to final debate of 2014
Nov 14, 2014 9:41 AM
Comments