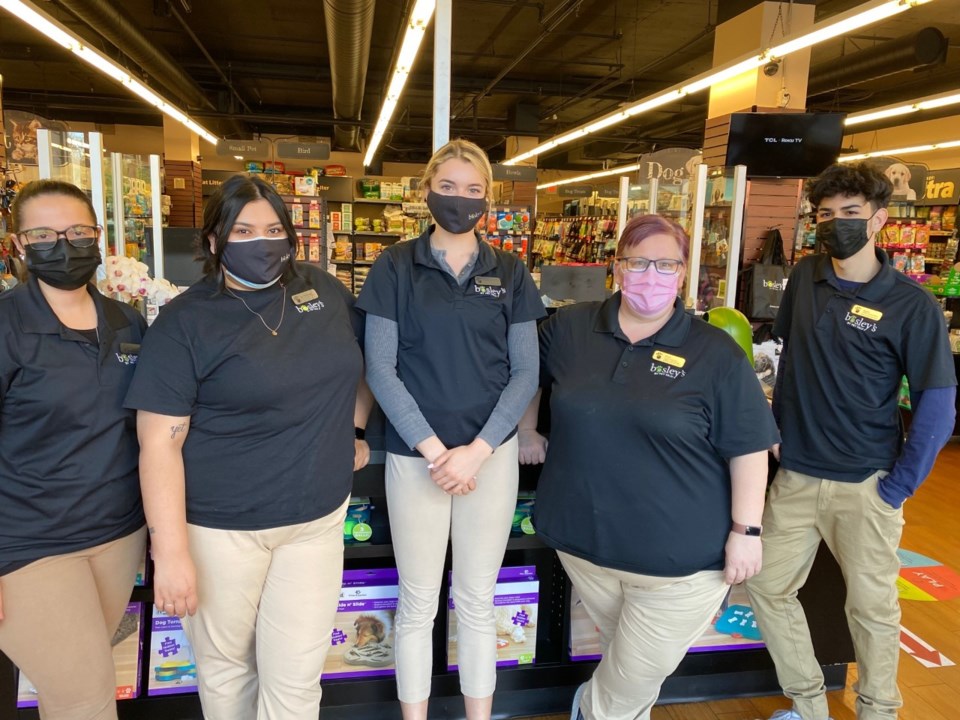 The staff at Bosley's in New Westminster wear facemasks when they're in the store - and require customers to do the same.Contributed

A New Westminster business has had to call police twice within a week because of nasty encounters with customers who are refusing to wear facemasks.

Karima Jivraj, owner of Bosley’s in Columbia Square, took to social media on Monday to urge customers to wear facemasks when they’re in her store.

“I am kindly asking you to continue wearing masks in my store as I am trying to be a responsible business owner,” she wrote. “This is to protect you as a customer, my team and our families. A lot of my team doesn’t have their second shots and have to wait their turn.”’

Jivraj said some of her employees live with siblings who are too young to get COVID-19 vaccinations.

For people who choose not to wear a mask, Jivraj said she’s made other shopping options available, such as online ordering with delivery or curbside pickup.

Jivraj said most customers have been great about wearing masks, but three incidents in the past week rattled her staff. The first incident occurred on July 12, when a man refused to wear a mask.

“I gave him a mask. He said, ‘No, I am not putting it on.’ He called me all kinds of names and swore at my staff,” she said. “Then he put in a complaint with head office.”

According to Jivraj, the man claimed she had “forcibly tried to put a mask on him.” She said video surveillance showed otherwise, and the man was told he was no longer welcome in her store.

A few days later, another man entered the store without a mask and her staff told him he was required to wear a facemask in the store. He refused.

“He got really mean. Like mean. Like hostile mean,” she told the Record. “They were concerned about my safety.”

Jivraj, who was at a veterinary clinic down the street, told her staff if they were concerned they should call the police. When she returned to the store, the customer was waiting.

“I walked in and I waited for the police to come. The staff called the police because they were concerned that he may hurt me. They told the police officer what happened and why we called them,” she said. “The guy turned around and said it was my staff that was hostile, and that my staff were always rude and mean.”

Jivraj said the police officer told the man the store has the right to require customers to wear facemasks.

While her staff were “completely shaken up” by the man’s behavior the day before, Jivraj said they were “flabbergasted” by the actions of a woman who entered the store the next day.

“On Saturday a woman came in. She blatantly walked in, refused to listen to my staff. Completely ignored them, walked down the aisle, picked up a bag of food and walked right out because she didn’t want to wear a mask and we refused to serve her,” Jivraj said. “She walked out with a bag of food.”

According to Jivraj, the woman left the store without paying for 10-pound bag of cat food that costs $70 to $80.

Jivraj, who wasn’t in the store at the time of the incident, said police were called but they didn’t attend because the woman had already left the store.

Jivraj said her mask policy was based on her staff’s comfort level in dealing with customers who may not be wearing masks.

After taking to social media with her concerns about the way her staff had been treated by people not wanting to wear a mask while in the store, Jivraj said one customer popped by to give her kudos for standing up for her employees.

“While the mask mandate has now been lifted, individual store owners still have discretion if they require customers to wear a mask,” he said in an email to the Record. “If store owners are requesting masks to be worn by customers, then customers are to abide the requests of the store owners or leave the store.”

Mayor Jonathan Cote said he hadn’t heard if other businesses were experiencing issues similar to those at Bosley’s.

“My main message to the community is to continue to respect the rules by individual businesses and how they operate,” he said, “and to just be mindful that, even though we are moving in a good direction so far with the pandemic, everyone is coming at different paces and different speeds. We have to be respectful of that and we have to be respectful to the rules that businesses have in place. I encourage the community to show that respect.”