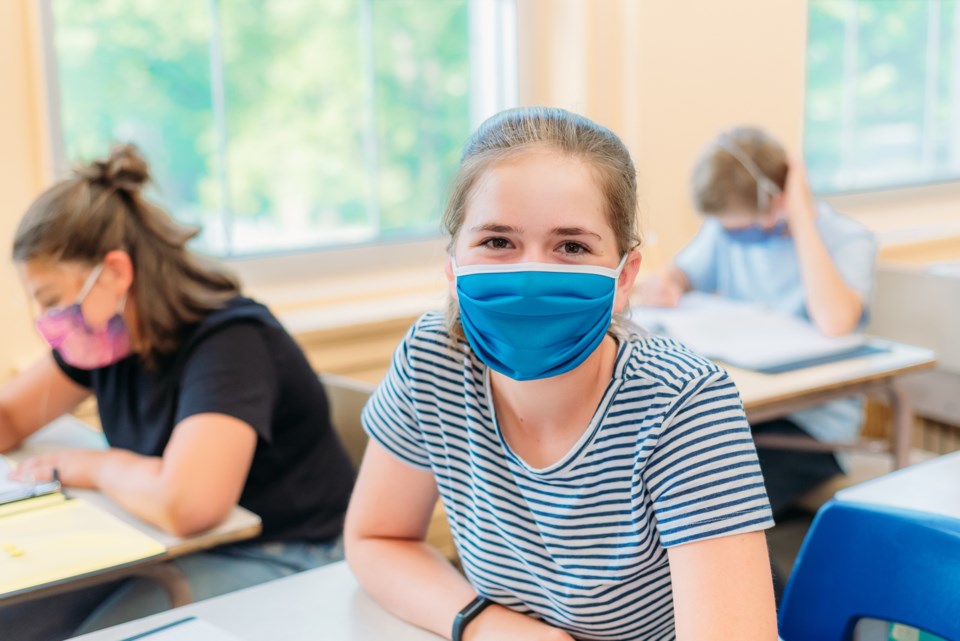 A few hours after new health and safety guidelines were announced for B.C. schools, the president of the New Westminster Teachers’ Union was finding herself somewhat underwhelmed.

“I think that they’re going in the right direction, but there’s still a lot of work that’s to be done,” said Sarah Wethered, in an interview with the Record late Thursday afternoon.

The most talked-about change was the new announcement that masks will now be mandatory for middle and secondary school students in all school spaces – except when students are sitting or standing at their own desk or workstation, behind a barrier, or eating and drinking.

Until now, middle and secondary school students had been required to wear non-medical masks when they were in “uncontrolled” settings (such as hallways or libraries) or when not with their learning groups, but not in their own classrooms.

Wethered said she finds it “incredible” that students still don’t have to wear masks while at their own desks.

“Most classrooms don’t have desks that are two metres apart, so I would still advocate that students be wearing masks,” she said. “I think the only way they should take off their masks is if they’re eating or drinking. … I would have liked it to be stronger: If you’re in a classroom, you’re wearing a mask.”

During a Feb. 4 media briefing by Education Minister Jennifer Whiteside and provincial health officer Dr. Bonnie Henry, Henry said the new mask mandate for students is similar to what’s in effect in places such as restaurants and offices – that is, wear a mask when moving about, but not when sitting in your own space.

But Wethered said that comparison doesn’t take into account that students in classrooms are still sitting closer to each other than patrons in restaurants or workers in offices.

“I have my own office, and I have a meeting table. If I have a second person in here, we are six feet apart and we can take off our masks. But if I have to sit at the table with another person to discuss something, I insist on having a mask,” she said. “I do find it troubling that as long as you’re sitting down, you don’t need to wear a mask.”

Wethered was, however, glad to see that the language around mask use by elementary students has been changed from “not recommended” to “not required.” She said that change will make it easier for teachers to encourage mask use in classrooms.

At the briefing, Whiteside said that issue had been the subject of discussion by a provincial steering committee and it was decided that it made more sense for students to be following guidelines consistent with the environment they are in.

On the positive side, Wethered welcomed the announcement of changes for physical education and music, including the requirement that any shared equipment (such as weights, treadmills or musical instruments) must be thoroughly cleaned and sanitized between uses.

She said that’s a positive change from the current situation in which PE equipment only needs to be wiped down once a day.

“I welcome the fact that it’s going to be done between every use now,” she said. “I think it just makes it safer.”

Likewise, Wethered embraces the fact that guidelines from the B.C. Music Educators Association, including the use of masks while singing, have been backed by the provincial health office.

But she’s disappointed that other changes teachers had hoped for – foremost among them fewer students in classrooms – were nowhere to be seen in yesterday’s announcement.

The new guidance specifies that physical distancing means two metres of space, rather than the one metre outlined in the previous document. But Wethered said that means little in the day-to-day life of most classrooms.

“That’s a positive sign, but our classrooms are small and there’s lots of kids in them,” she said. “They haven’t reduced classroom density.”

Wethered is concerned that the new guidelines still rely on “cohorts” of up to 60 students at elementary and middle school levels and up to 120 students at secondary schools. She pointed out that arrangement means every student is still exposed to large numbers of others, and the effect magnifies for families with multiple students in different cohorts.

She was also disappointed to see no clear directive for improved ventilation and no changes to contact tracing – two other areas in which teachers had hoped for change.

Wethered did note, however, that contact tracing in Fraser Health appears to be picking up speed. In one recent New Westminster case, she noted, an exposure happened on a Friday and she had the notification by Monday.

“I do welcome that, and I hope that that continues, that those exposure notices come quite quickly,” she said.

In a related move, the B.C. Teachers’ Federation and B.C. Public School Employers’ Association also came to an agreement this week on COVID-19 leave for teachers.

Under the agreement, any teacher directed by public health to self-isolate because of exposure to COVID-19 is to be given the option to work from home, if possible. If it’s not possible, the teacher is to be given general paid leave rather than being required to take time off out of their own sick-day bank.

“It’s positive. It’s excellent. I can’t say enough great words about that,” Wethered said. “But that took a year to get.”