New Westminster Teachers' Union president signs on to letter asking for a shift to hybrid learning, a mask mandate for all students, and confirmation of when teachers will be vaccinated
Apr 8, 2021 4:08 PM By: Julie MacLellan 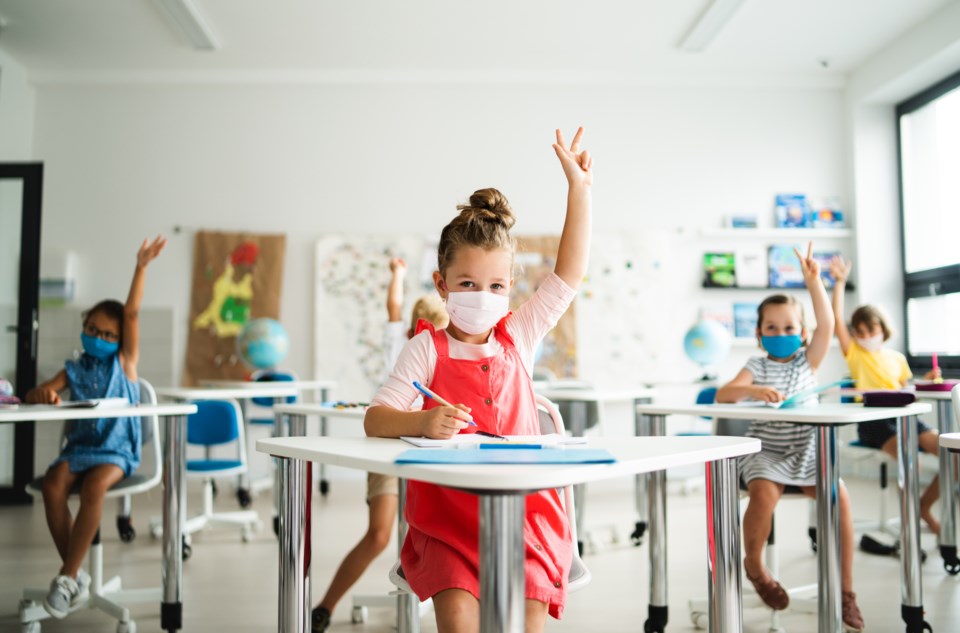 Kindergarten to Grade 3 students should be wearing masks in classrooms, say Fraser Health teachers' union presidents. The teachers are calling on the B.C. government to take more aggressive action to curb COVID-19 in schools, including shifting to Stage 3 hybrid learning.Getty Images

Teachers’ union presidents in Fraser Health are calling on the province to take “more aggressive” measures to keep schools safe from COVID-19 in the face of B.C.’s rising third wave.

They’re calling on the province to immediately switch to hybrid learning in the region, to mandate masks for all students and to confirm when teachers will be vaccinated.

Sarah Wethered, president of the New Westminster Teachers’ Union, is one of 12 local presidents who signed the statement issued Thursday, April 8. The statement cites the increasing prevalence of variants of concern in the region (which covers the territory from Burnaby to Boston Bar) and, in particular, B.C.’s status as a “hotspot” for the P1 variant.

“The reality is, those variants are much more contagious, and what worked in October may not work in April,” Wethered said in an interview with the Record.

The teachers’ statement asks the province to make the switch to Stage 3 of B.C.’s education restart plan in Fraser Health. Under the current Stage 2, most students are in class full-time, with only large high schools (such as New Westminster Secondary) incorporating some remote learning in order to meet the requirements of learning group sizes.

At Stage 3, all schools would shift to a hybrid of online and in-class learning to reduce the numbers of students in classrooms.

TIMING IS KEY FOR SHIFT TO STAGE 3

The teachers’ statement notes “timing is of the essence” for the shift, since the third quarter of the school year is coming to an end and secondary school students will be switching cohorts for the fourth quarter.

“This poses a substantial increased risk for transmission in schools. The quarter turn-around is an opportune moment to implement a phase change to keep our students, their families and staff safe,” the statement reads.

Wethered noted the B.C. Green Party has called for a targeted three-week school shutdown to help put a pause on the current situation – something she said makes a lot of sense. She said New Westminster teachers are ready to return to hybrid or remote learning if and when the word comes from the province.

The teachers are also calling for an extension of the existing school mask mandate.

Wethered said she’s grateful for the recent extension of that mask mandate to apply to all grades 4 to 12 students in their classrooms. But she was critical about the confusion caused by the lack of clarity from the provincial health office and the Ministry of Education about whether it was indeed a “mandate” or whether it was a “guideline.”

“There’s a big difference between a mandate and a guideline,” she pointed out.

Moreover, she noted, the new mandate still does not apply to students from kindergarten to Grade 3.

“I was getting a lot of calls from primary teachers saying, ‘Why aren’t we getting that layer of protection that our intermediate, middle and secondary teachers are getting?’” she said.

VACCINATION STILL UP IN THE AIR

The third and final ask in the teachers’ statement is for clarity around when teachers will be vaccinated. Teachers had been slated to receive the AstraZeneca vaccine as part of B.C.’s essential workers rollout. That came to a halt when the National Advisory Council on Immunization flagged concerns over the safety of the AstraZeneca shot for younger people and B.C. put a pause on that stream of vaccinations.

Teachers and staff in the Surrey school district have been vaccinated, but Wethered said teachers in other districts in the region have yet to receive word on when it will be their turn.

“It’s very frustrating,” Wethered said, adding that certainty about a vaccination date would help alleviate teacher anxiety. “That would put a lot of people’s worries to rest, knowing it was going to happen. But right now there’s no information.”

With so many big question marks, Wethered said she worries about what could happen in local schools – noting the current situation with the Vancouver Canucks hockey team.

“The NHL has really strict COVID protocols, and now almost the entire Canucks team are in COVID isolation. It shows just how quickly one of those variants can go through people in close quarters,” she said.

And since “close quarters” describes pretty much every school classroom, Wethered can’t help but worry.

“I lay awake at night thinking about this. I lay awake thinking, oh my gosh, is tomorrow the day? How many exposure letters will I get this week?” she said. “I just worry that a variant will get in in New Westminster and it’ll just rip right through.”

SCHOOL DISTRICT NOT AT FAULT

Wethered was quick to note she’s not criticizing the New Westminster school district.

“Short of actually putting a Plexiglas box around each kid’s desk, I don’t think there’s anything they could do.”

Wethered is frustrated with the lack of information from the province to back its often-heard statement that levels of COVID-19 transmission are low in schools.

“I’m very disappointed they don’t give the data of infections in schools. It frustrates me,” she said. “If they could show us the data, that would be great, but I don’t see any data.”

Her concerns aren’t directed at the school district, she said; they’re directed at Fraser Health and the Ministry of Education.

If families have similar concerns, Wethered hopes they’ll voice those concerns to their MLA and to the Ministry of Education.

“I think the more people that know, and the more people who let their MLAs know that they’re upset with what’s going on, that they’re concerned about their children or their friends or their families who are in the school system – because I think the reason why we got the mask mandate we got was because so many people emailed the Ministry of Education or their MLA,” she said. “The more voices, the better.”

Desperate teachers lining up for leftover vaccine at Surrey clinics — only to be turned away
Apr 7, 2021 2:48 PM