A local political Facebook page is making waves over its staunch opposition to “overdensification” in New West. New Westminster Citizens Against Overdevelopment has grown to more than 500 likes and 600 followers since it was created in mid-May.
Aug 1, 2018 4:45 PM By: Lauren Boothby 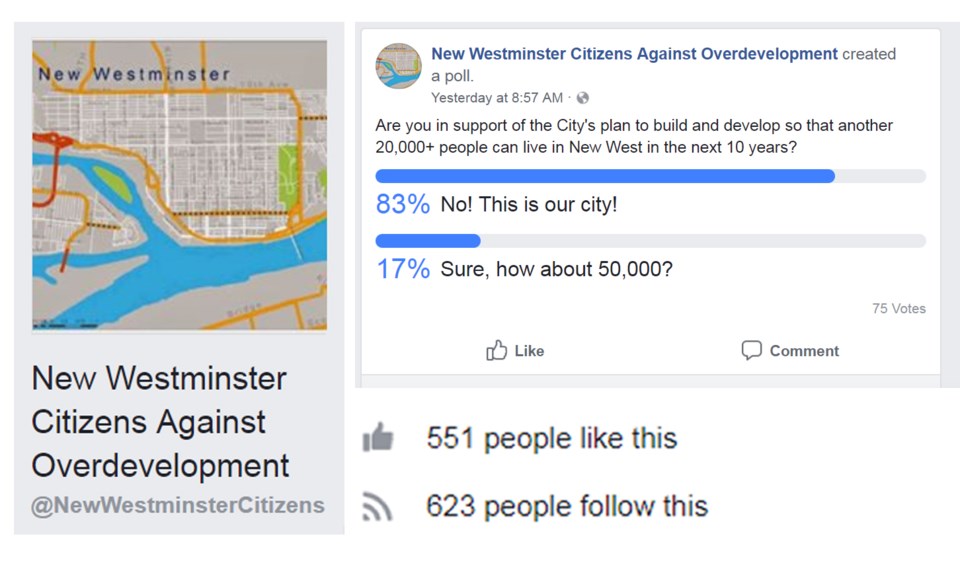 The New Westminster Citizens Against Overdevelopment group has attracted more than 600 followers since in was created in May.Facebook

A local political Facebook page is making waves over its staunch opposition to “overdensification” in New West.

New Westminster Citizens Against Overdevelopment has grown to more than 500 likes and 600 followers since it was created in mid-May. The page claims that the city is already overcrowded, and that high-density development will lead to undesirable changes in the city. The group takes issue with what they perceive as council’s direction to increase growth through high-density land use designations as part of the 2041 Official Community Plan.

Several unsigned posts from the page’s administrator accuse the current council of pushing a “pro-development agenda,” and express concern that political donations from developers may have shaped municipal housing policy.

Coun. Patrick Johnstone told the Record that donations did not influence his views on housing and development.

“The decisions I made at council are transparent and were not influenced by the donations I received when I ran for council,” he said.

Local business owner and resident Paul Slusher said he started the page to create a dialogue on New West development and political donations.

“If you read through the comments, you’ll see a lot of frustrated residents,” he told the Record. “If this kind of high-rise mentality continues, I will sell my home and I will leave New West. I don’t want to be part of this kind of thing. I’m not interested in a mini-Vancouver: that’s not why I live here.”

Slusher said he formed the group after speaking with residents who created a petition to oppose a development proposal at 616-640 Sixth St. in Uptown for a 29-storey mixed use development earlier this year. His business Lifetime Eyecare is located on that property.

“It’s the first people who are at least saying something. Now, so many people are so afraid to open their mouths,” she told the Record. “New West is such a tiny city. We do we have to be like downtown Vancouver?

“I’m an immigrant, yes. I understand more people want to come here, but New West is so limited."

But not everyone agrees with the views of the page. Coun. Patrick Johnstone has even sparred with page administrators after a post mentioned him by name and challenged him for a blog post where he argued the city should incentivize middle-sized housing.

In a poll posted Tuesday morning, the page asks if residents support plans to develop the region to allow for thousands more to move to the area. Possible responses are: “No! This is our city!” and “Sure, how about 50,000?”

Some have accused the page of being "NIMBYs," says Slusher, and anti-immigration, something he vehemently denies. The Record asked Slusher if he considers his views to be anti-immigration.

He responded: “To couch this as a xenophobic issue, that it's some kind of anti-don’t-come-here thing, that’s a false equivalency and it’s a lie,” he said. “They can come here if they want, but here as in New Westminster, if they can afford it. There’s no city in the world that is saying hey, 100,000 people, come to us, and we’ll figure out a way to get you housing.

As a resident, he says he has a right to disagree with the city on developments that impact the livability, density, and traffic of his neighbourhood. He said residents are not obligated to accept that the population of the city must increase, and that council must approve developments for the purpose of accommodating growth.

Slusher says he doesn’t believe running the Facebook page will change the city’s housing policies, but he feels like someone should challenge them.

The group has recently drawn some controversy on Twitter after banning people from the page and deleting their comments.

I've just joined a group that I'm proud to be a part of: People banned from the New West Citizens Against Overdevelopment Facebook Group @CanSpice @eastvancity


Wes Kinna, who works in the entertainment industry and has lived in New West since 2012, says he was banned for disagreeing with the page and told by the administrators that he was trolling. As someone who was very involved with the OCP process, he said he disagrees with their characterization of development.

“I think the views of the page are just wrong. The city is not being overdeveloped,” he told the Record. “I think the city has done a really great job of encouraging developers to build entirely for rental stock, which is wonderful for New Westminster. The whole region needs more rental housing.”

But Slusher said he only bans people who use aggressive or racist language, insult others or swear. So far, he said he's banned 15 to 20 people.

“This is not a playground for the wicked and the mean. It is a Facebook page designed to allow people to dialogue on an important topic. If you're coming here to throw dirt on it, pee on it, throw up on it, you're gone,” he said.

He said there are people who are posting to the page who disagree whose comments are allowed to stay.

In May, the group put a call out to potential city council candidates who would want the group to endorse them. So far, that call has been unanswered. Slusher said he is not interested in running for council himself.

669
New West sees big jump in COVID-19 cases
333
A cafe helping people in need says pay what you can
259
Opinion: Now NIMBYs are whining about shadows from new housing
221
Filming in New West: A bright spot in a challenging year
177
New West athlete remembered for her zest for life