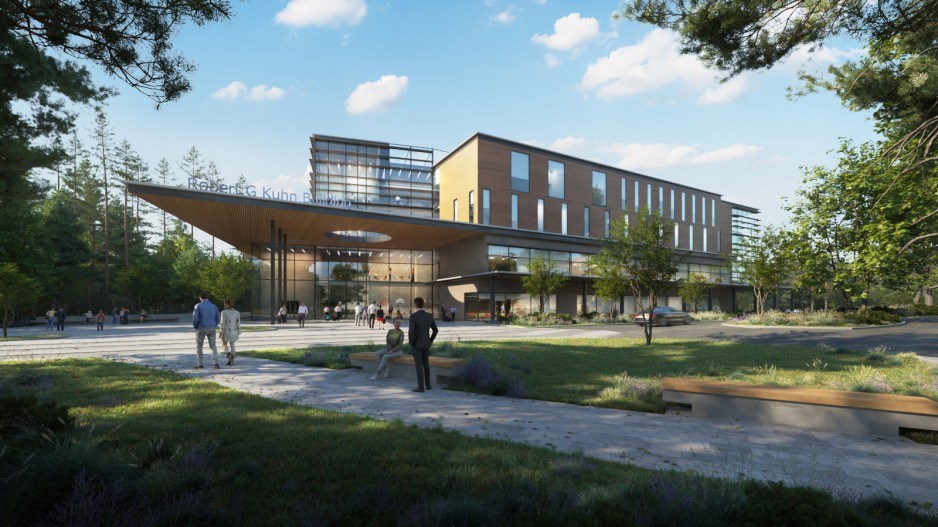 Virtual reality, artificial intelligence and big data are reframing the operations of an industry often thought of as a technological laggard.

Those technologies are also fundamentally changing how buildings are designed.

“Technology is just looming there as the big game-changer,” said David Thom, president of IBI Group, which ranks second on Business in Vancouver’s list of Biggest Architecture Firms in Metro Vancouver.

For many of the firms on the list, technology has changed the way they work. It’s changed their historical business models, their relationships with clients and the traditionally sequential and siloed process of designing and developing buildings.

It has also unlocked the ability to create more complex structures more efficiently, with new building materials and greater precision.

“It’s a data business,” Thom said. “How are these buildings designed? They’re designed by inputting data, not lines on a paper.”

“That’s something we didn’t do five years ago or 10 years ago,” said Omicron CEO Bill Tucker. “The capability and the tools just weren’t there.”

The adoption of parametric modelling allows firms to crunch large amounts of data and compute realistic and incredibly detailed plans in minutes.

“Instead of somebody slaving away, testing different things and you get three out of one week, you’re getting 300 in two minutes,” said Veronica Gillies, managing principal of Western Canada architecture at HDR, the oldest firm on BIV’s list by more than 40 years.

On a $1.5 billion hospital project, HDR can model a plan right down to the level of a single screw. Gillies said that prevents the need for revisions when mechanical engineering and architectural specifications clash, for example.

Thom said IBI Group has pioneered the use of robotics in clash detection. The first generation of its tools had virtual robots roaming through the digital twins of to-be-built buildings around the clock to detect clashes. The next generation uses artificial intelligence to determine the best design solution where a clash is detected.

According to Tucker, using virtual reality (VR) and other immersive technologies helps provide clients with a clearer sense of a space than do two-dimensional drawings or miniature renderings. Clients want to see — and now can see — their finished building, down to the tile, before shovels break any ground.

“That’s the most cost-effective time to make changes or tweaks,” said Tucker. “I believe it’s going to be one of the most important tools we have delivering buildings in the future.”

At IBI Group, which has 2,600 employees across the globe, VR allows the firm to assign tasks to the best people for the job, regardless of geography. They can collaborate and work on a model at the same time, in real time. Clients can also use the technology to train staff within a virtual-reality hospital, for example.

Technology — and the companies developing it — is also shaping the work of local architecture firms indirectly. Vancouver, as a city of small commercial tenancies — 3,000 to 5,000 square feet — has been supplanted by demand from technology and co-working companies looking for floor plates of between 12,000 and 15,000 square feet or more.

“One of the things that I’m going to find interesting is with all of the tech and co-working space, and the brain gain that we’re going to be getting, is, where are all these people going to live? Where’s the housing?” said Mark Whitehead, a second-generation partner at Musson Cattell Mackey Partnership (MCM), which did work on The Post building in downtown Vancouver, which will house Amazon.

Whitehead said MCM — which has grown to 110 employees from 25, mostly in the past five years — has had clients asking about multi-use campus developments that house employees where they work.

“We always knew that eventually there would be a critical mass here, and I think that is having a big impact on our commercial sector,” said Patrick Cotter, managing partner of ZGF Architects Inc.’s Vancouver office.

He explained that complexity and convergence capture how the industry is being transformed. “We’re now starting to see less distinct building typology,” Cotter said, adding that regional, national and international influences — and the needs and experiences of American technology giants – are increasingly shaping architectural design in Vancouver.

Mass timber construction has also generated excitement and opportunity in the industry.

“It feels like the market’s taken a little while to get over that mass timber hump, and it feels like it’s over the hump now,” said Ray Wolfe, partner in Thinkspace Architecture Planning Interior Design, one of only two firms on BIV’s list not based in Vancouver proper.

The cost premium concerns have disappeared, Wolfe said. The challenge is availability.

“B.C. needs to catch up, and I’m glad we are,” said Wolfe, who added that Thinkspace is wrapping up a net-zero-ready study for a school in the Lower Mainland.

“We’re not talking LEED [Leadership in Energy and Environmental Design] anymore. We’re talking passive house and beyond,” said Gillies, pointing out that environment-related policies are increasingly mandated and not simply voluntary.

As the industry adapts to emerging trends on multiple fronts, interviews with firms on BIV’s top-20 list highlight the need for talent, and the challenges some firms face in acquiring talent for a much more digital and data-driven time.

The cost structure, for some firms, also hasn’t changed, even though expectations around the use of new — and expensive — technologies have.

Despite some challenges, there is excitement in the industry, as new technologies are unlocking opportunities with the power to shape how communities are designed.

For example, Thom said IBI Group has a team working on codifying happiness.

“All the things that make you happy — what’s its connection to the physical environment? And it’s really interesting,” he said. “When I get the answer to that one, I think we’ll really be in the money.”