Opinion: Developers, planners should broaden approach to include thin homes 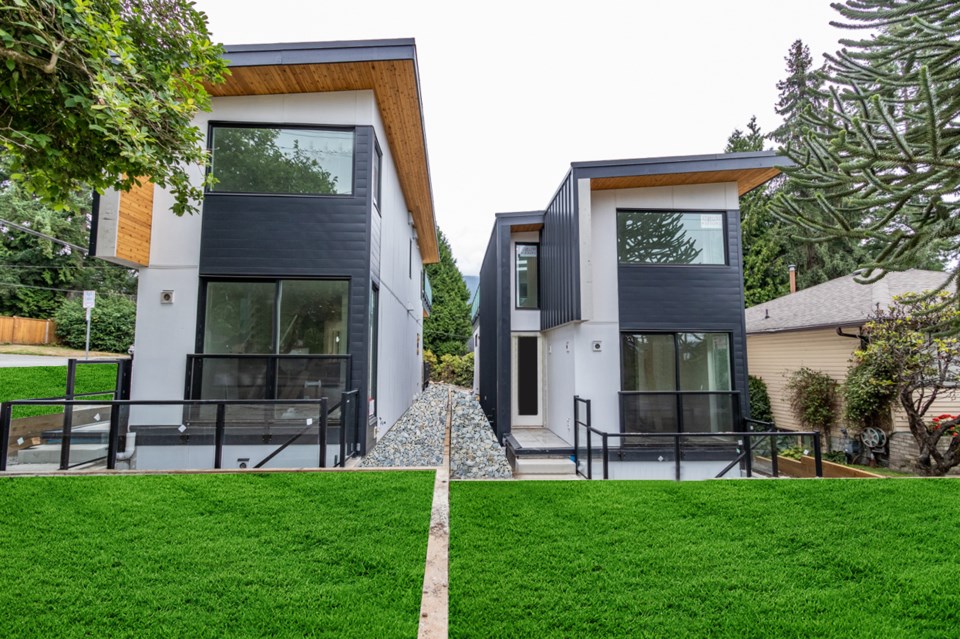 Mark Rasmussen, of Sutton West Coast Realty, listed this pair of brand-new thin homes called The Twins in North Vancouver, created by the division of a 50-foot lot


Many generations have heard the British pop group Madness’ hit song “Our House” about growing up in a working-class home in London. This catchy tune didn’t specify single-family home or apartment in the lyrics. In fact, the music video depicts many different home choices, including the ubiquitous U.K. “terrace house”, rows of attached homes, joined by common walls. Home isn’t defined by a prescriptive structural design, but by where you sleep, entertain friends or even launch a business.

Home structure labels don’t matter much to Lower Mainland residents lucky enough to buy a rare “thin house” on a smaller lot size, approximately 122 feet by 16.5 feet. A standard lot size is about 33 feet by 122 feet. Although thin homes may be narrow to look at, their comfortable layout can include a couple of bedrooms, full bath or two, plus a small yard for gardeners, while seamlessly fitting the neighbourhood streetscape.

A Sutton Centre realtor, Kristy Mattiazzo, who sold a West Point Grey thin home of 946 square feet (one bedroom, two bathrooms), said her client lived there 26 years before moving onto the next phase of life. “That is where Vancouver planning has gone wrong. We have a 33 by 122 lot or bigger to maintain, or no backyard at all in condo living.  We are missing the happy medium. Homeowners are consuming far more space than they actually use. Oftentimes, rooms are left unused and have no purpose.”

In Vancouver, you can find about 60 of these thin homes across Point Grey, Dunbar, and the East Side, built around the 1980s. About a century ago, buyers would purchase two lots and use one as a garden. Then, they’d eventually sell some of that garden space to a new buyer who built a thin home, Mattiazzo explained.

Of course, these homes were built when municipalities didn’t have so much regulatory red tape. I wonder if you printed out all the current building regulations from all levels of government, and stacked the pages, would they exceed the height of Vancouver city hall?

Besides the onerous regulation, we have another reason so few thin homes exist. They simply weren’t welcome in single-family neighbourhoods. A 2014 Vancouver Courier article reported that in 1989 “neighbours were freaking out over the size of these houses and argued they weren’t compatible with standard single-family homes.” This is a similar reaction homebuilders face today when introducing new housing forms in many single-family zoned communities. Although duplexes were recently permitted in Vancouver, yielding their own resident backlash, few of them have actually been built. Scarcity creates high prices.

The majority of B.C. residents favour more housing choices. An independent polling firm, Ipsos, conducted a survey for UDI that found 75 per cent of BC residents want municipalities to approve more housing options within single-family neighbourhoods.

The former B.C. premier and former mayor of Vancouver, the Honorable Mike Harcourt, underscored this need to CFAX1070 radio: “If I could wave a magic wand, I'd get rid of single-family zoning throughout the lower mainland. Duplexes, townhomes and row houses must be embraced, with multi-use developments close to schools with declining populations.”

Thin homes of the world

Thin homes can be part of that choice mix. You can find them outside B.C. in other global cities grappling with similar housing challenges.

Auckland, New Zealand has The Hotel Forumle1 at 197 feet tall and less than 20 feet wide, one of the skinniest tall apartment buildings in the world with 144 small studio apartments. The narrowest house in Ireland is Dublin’s 1.8 metres wide, “19a Long Lane”, now a tourist destination for overnight stays. An enterprising New York City architecture firm built thin homes to fill the irregularly sized spaces between apartment blocks in Brooklyn, about 3.9 metres wide and 30 metres long. Toronto has a 51-storey tower nicknamed “The Sliver”, one of the tallest, slenderest residential buildings in Canada.

Back home in Vancouver, we celebrate a Guinness Book of Records citation for the thinnest commercial building in the world, a global tourist attraction. You’ll find the Sam Kee building, circa 1913, at just 4 feet 11 inches deep, in Chinatown’s Shanghai Alley.

If history and global influence can teach us, then we should learn that people just want a home they can afford. Prescriptive, top-down rules about how many windows, character or view preservation should not be used to limit home choices for those of more modest means. We have talented architects, builders and trades in our region who are ready to get creative and throw away the conformity cookie cutter.