New Westminster city council is sensitive to the needs of a property owner and a “night watchman” living in a Brow of the Hill home, but is deeply concerned about health and safety issues related to the house.
Nov 23, 2017 10:40 AM By: Theresa Mcmanus 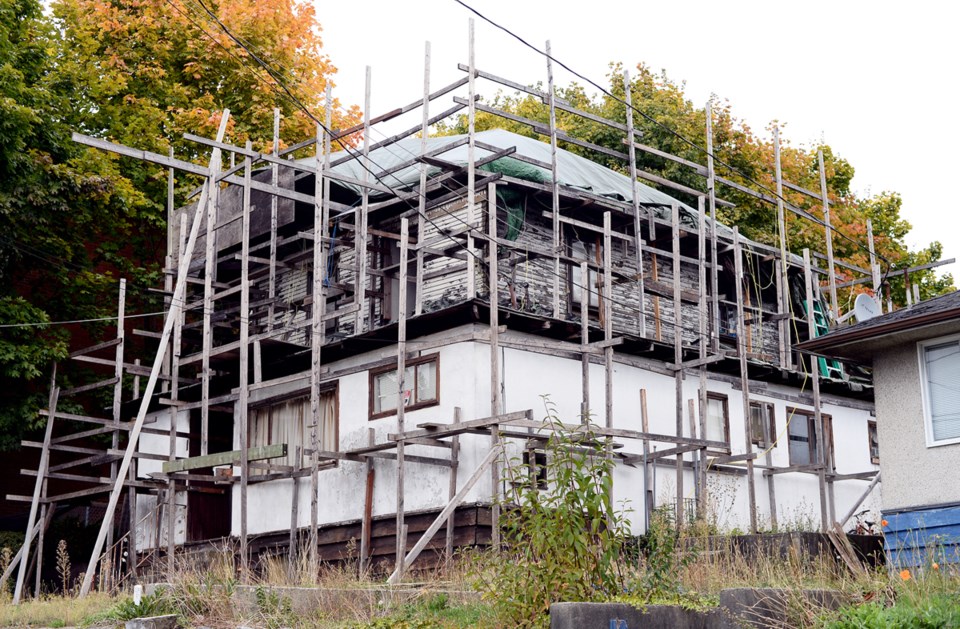 A hazard? City council is grappling with how to deal with a property at 509 11th St. that’s raised concerns about its appearance and safety. The city has laid out steps the property owner must take to address safety concerns.Jennifer Gauthier

New Westminster city council is sensitive to the needs of a property owner and a “night watchman” living in a Brow of the Hill home, but is deeply concerned about health and safety issues related to the house.

City officials have identified numerous health and safety issues related to the outside and inside of the house at 509 11th St. The city states there is no furnace in the house and scaffolding has surrounded it for years. There is also stagnant water in the basement, black mould in the wood framing in the basement, broken windows, a collapsing ceiling in the hallway on the main floor and openings in the house that allow “raccoons and other vermin” to get inside.

“Staff are asking council to impose a remedial action requirement on the owner, Mr. James Bell, requiring him to either conduct repairs to his building or to demolish the building,” said Kim Deighton, the city’s manager of licensing and integrated services. “Section 72 of the Community Charter gives council the authority to impose remedial action requirements if one of the following conditions apply: hazardous conditions or declared nuisances. Staff believes the property in question meets both of those criteria.”

Christy Meriegh, manager of building inspections, said city officials have had limited access to the interior of the house but believe the house is in very poor condition and is in violation of the B.C. Building Code.

At Monday’s council meeting, staff outlined concerns about the house, and the property owner, James William Bell, was given a chance to address the city’s concerns.

Bell, who lives in the house next door, told council the city’s report was filled with inconsistencies and untruths. He said the home doesn’t have any broken pipes or black mould, alleged the water in the house is coming from a neighbour’s property and insisted the scaffolding is safe.

“I don’t feel that there is any hazard with what I am doing,” he said. “I was just up there today doing some work. I will be up there tomorrow and the next day and continue on with what I am doing. I hope you consider this very carefully because it’s affecting my night watchman who is living there. He doesn’t have anywhere else to go right now.”

A “night watchman,” who has lived in the house for seven years and does not pay rent, sat in the gallery at council chambers, yelling out comments during the discussion that lasted for nearly two hours.

Mayor Jonathan Cote is concerned about Bell’s ability and willingness to rectify the issue. He said he’s also concerned about the man’s safety in the house, noting he would be on the brink of homelessness without these accommodations.

Coun. Bill Harper said the city has a responsibility under its bylaws to ensure these types of safety issues don’t exist in homes in the city. He said the scaffolding is “problematic” and the house is without a furnace.

“The last thing I would want to see happen is that your night watchperson dies in a fire caused by an electric heater,” he said.

Harper said the issues with the house have gone on for a long time and need to be resolved.

Bell said financial issues and time restraints have impacted his ability to get the work done quicker, but he’s working on the property every day.

“The issues are minor,” he said. “They can be dealt with.”

Coun. Mary Trentadue said she isn’t hopeful much will change with the property in 60 days and stressed the city needs to make sure the property is safe.

“I don’t want to be the councillor at the table when something happens because we did nothing,” she said. “I do believe the city has been working on it for five years with the owner, Mr. Bell, and I can appreciate that you have had some challenges. The reality is you are responsible for who is living in that home and their safety. And this house is not safe. And it concerns me that you don’t seem to see that, that you believe many of the issues are minor. I disagree.”

Action can’t come quick enough for some of the neighbours, who have contacted city hall numerous times to voice concerns.

“It’s a horror show,” said a neighbour, who recently spoke to the Record on the condition of anonymity. “Unsightly doesn’t really say enough. You won’t believe it when you see it. It’s got to be a death trap; it has to be.”

What are the problems?

On Monday, council received a staff report and a presentation outlining the various health and safety concerns about the house at 509 11th St. These include:

What does the city plan to do to address the problem home?

Here’s what the city decided to do to address the many problems it has found with the home at 509 11th St.

492
Here’s where people who are homeless in New West can enjoy a hot shower and get a comfort kit
478
Luxurious residences are setting a new standard of living in Langley
214
UPDATE: Here's where you could be able to buy cannabis in New West
143
New West now grappling with second big COVID-19 outbreak
68
Canadians are outraged by the new egg patty in Tim Hortons' breakfast sandwiches