Non-market housing and a childcare are included in a proposed highrise near Albert Crescent Park in downtown New Westminster.
Jan 31, 2019 1:35 PM By: Theresa Mcmanus 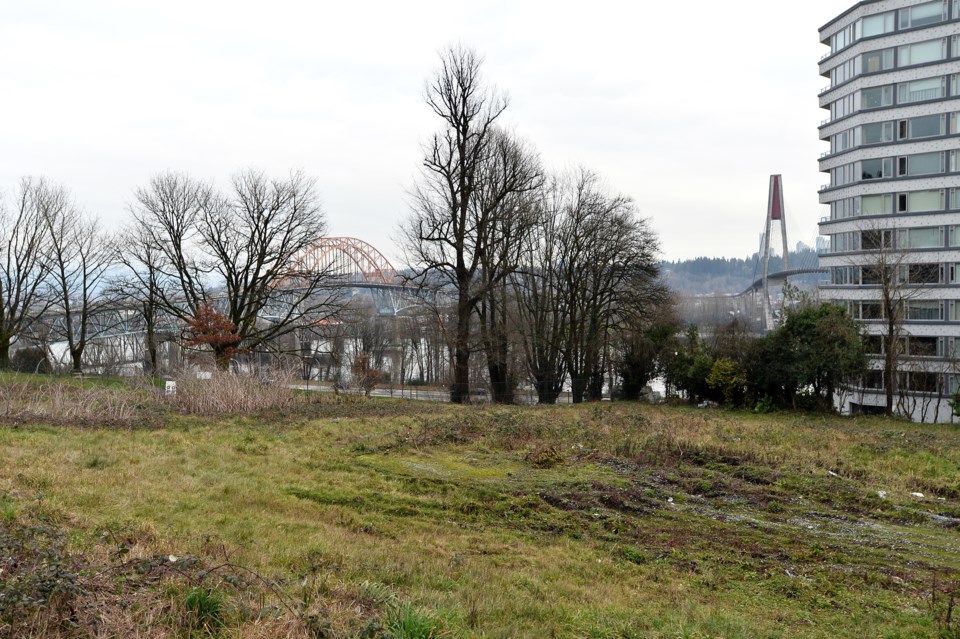 A developer is contemplating a plan that would see a resideitnal highrise project that includes space for a not-for-profit child care built on a site in downtown New Westminster, near Albert C resent Park.Jennifer Gauthier

Non-market housing and a childcare are included in a proposed highrise near Albert Crescent Park in downtown New Westminster.

The city’s land use and planning committee recently received a pre-application for review of a project that includes a 35-storey residential highrise, 27 units of non-market housing, 4,200 square feet of space for a not-for-profit child-care centre, and 11 two- and three-bedroom townhouse units. The site at 51 Elliot St. is adjacent to Albert Crescent Park and is less than 250 feet away from Qayqayt Elementary School.

“The tower is situated in the centre of the site and is surrounded on three sides by townhouses facing Elliot Street to the west, facing an existing pedestrian connection to the north and facing the park itself on the east,” said planner Mike Watson. “On the south side of the site, the applicant has proposed the non-market child care be in a separate building adjacent to Albert Crescent Park.”

While the applicant has made a “pre-application inquiry” to the city, the developer would need to submit rezoning and development permit applications if it hopes to proceed with the project. The site is designated as Residential – Tower Apartments in the official community plan, which envisions residential towers but could also include mid-rise apartments, low-rise apartments, townhouses, stacked townhouses and row houses.

At the January land use and planning committee meeting, staff sought feedback on a number of things including: the overall building massing and height; provision of non-market housing; and provision of space for a not-for-profit child care.

“The density bonus policy supports a rezoning of the subject site to RM-6(DB), which would allow a maximum residential density of 4.0 FSR and a maximum height of 73.15 metres (240 feet), accommodating about 24 storeys, in exchange for bonus density charges set out in the zoning bylaw,” said the staff report. “In cases where a development proposal exceeds the height and density anticipated, the policy allows council to consider whether unique and exceptional circumstances or opportunities warrant additional density.”

As currently proposed, the project would have an overall density of 6.63 floor space ratio (of which 6.0 FSR is from the residential strata component), with staff suggesting the provision of a not-for-profit child care be considered a rationale for considering density above the maximum on this site.

In terms of height, the proposal is seeking an increase in height from 24 to 35 storeys, which is an increase of 45.8 per cent. A staff report said the overall building massing is “disproportionate” in consideration of the site context, as residential towers in the area range from 12 to 24 storeys.

“The general conclusion of the staff analysis is that staff considered the balance of benefits to the community to be generally consistent to the benefit that would be conferred to the applicant,” Watson said. “However, we do want to do some further exploration around the building height and massing, and potential relocation of some of the density on the site to the ground level – some additional townhouse units.”

Staff will summarize the feedback and recommendations from the committee in a pre-application letter to the applicant, Regal Century Management Inc.

Coun. Mary Trentadue, one of three council members on the land use and planning committee, said she supports some additional density under the zoning entitlements but isn’t sure about supporting a 35-storey tower at that site. She’d like to see a fulsome shadow study on how this building would impact the ones around it and would like out-of-school care to be considered for child care on the site, as it’s close to an elementary school.

The Record will be publishing an ongoing series of stories about projects being considered by the city’s land use and planning committee, which considers pre-applications from developers for projects in the city and provides feedback to city staff and the applicants that can be used to develop a formal application that could be considered by city council. Because the applications coming before the LUPC are preliminary, a lot of changes can arise before they make it to council for its consideration – if they make it that far.

Greater Vancouver has the most secondary homeowners in Canada: survey
Jul 29, 2021 7:29 AM