City moves ahead with sale of public land to developer, despite last-ditch attempts to cancel deal
Dec 6, 2019 12:20 PM By: Kelvin Gawley 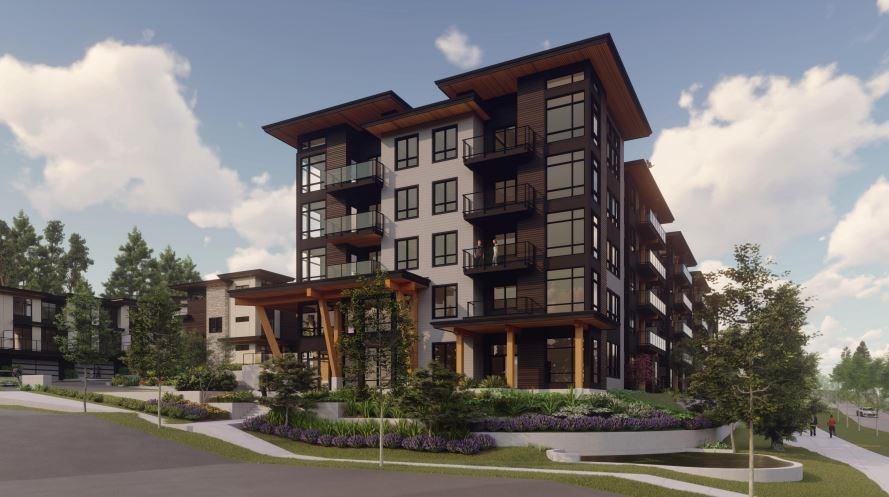 Polygon Homes added a fifth floor and 20 rental units to its development plan on Byrnepark Drive after its initial proposal was met with fierce opposition.City of Burnaby

The City of Burnaby is moving forward with a controversial sale of public land to a developer, but there may be a saving grace for some of its opponents.

A motion introduced by Mayor Mike Hurley and passed this week will direct all proceeds from the sale of 6438 Byrnepark Dr. to Polygon Homes to a new capital reserve fund for affordable housing.

The move came after members of the public and some councillors tried to change the terms of the sale or even halt it altogether.

In 2017, the city put the 3.6-acre lot near Byrne Woods Park in the Edmonds neighbourhood up for sale, with a minimum bid of $28.7 million. The NOW asked the city what Polygon’s winning bid was, but did not get an answer by deadline.

From the beginning, there was strong opposition to the sale. A petition signed by more than 700 people decried the destruction of wildlife habitat that would come when the lot is eventually cleared of trees to make way for a development.

The city struck a deal with the developer, inviting the developer to present its development plans and agreeing to finalize the sale once it passed the requisite rezoning.

Earlier this year, Polygon announced it planned to build a four-storey, 58-unit condo building and 43 townhomes on the Byrnepark site.

In March Coun. Joe Keithley introduced a motion to send the project back to staff to “see if some accommodation can be made with the developer to include some non-market housing.”

The motion was, in Keithley’s words, met with “stone silence,” failing to gain a seconder.

When the rezoning went to a public hearing a month later, it was met with fierce opposition. Former Green Party council candidate Joel Gibbs said he opposed the proposal for a number of reasons, including its lack of affordable housing.

“If we’re going to sell public land, then we should get huge public benefits out of that … we’re getting literally nothing,” he said at the time.

In response to the backlash, the city sought changes to the development. It gave Polygon more density in a Metrotown development in exchange for adding 20 below-market rental units to the Byrnepark project.

The updated proposal came to a public hearing in October, where fewer people spoke up but those opposed still held the majority.

At the next council meeting, Coun. Colleen Jordan said she had a change of heart after initially supporting the sale. She introduced a motion to send the item back to staff to cancel the sale and pursue building co-op housing on the site.

“Once we sell it, once it’s gone, it’s gone forever,” she said at the Nov. 4 meeting. “I’m willing to say that I was wrong in going forward with it as a sale of a property.”

Jordan apologized to Keithley for not supporting his motion in March, but said it was “the thing that started me thinking.”

Jordan’s motion failed, with only Keithley and Coun. Dan Johnston supporting it with her.

Hurley said Jordan’s motion presented him with a “dilemma”: he would have “loved” to have seen co-op housing built there but the proposal came after the city struck a deal with the developer, which spent years planning the project.

“We made a deal and I have a very hard time going against a deal that was made – and I think it affects our credibility as a council,” he said.

Jordan later introduced a motion that would have directed staff to study potentially buying the 20 rental units to keep in the city’s possession indefinitely, but she pulled the motion at a subsequent meeting.

Hurley’s motion to direct the sale proceeds toward future affordable housing projects passed at council’s Dec. 2 meeting. He said he hoped the move would make up, in part, for the loss of public land.

Meanwhile, the city plans to partner with BC Housing to build non-market housing on six other municipally owned lots.

Hurley and Jordan both said they hope the Byrnepark lot is the last parcel of publicly owned land that Burnaby ever sells to a developer.

“We just don’t believe in selling city land anymore,” Hurley told the NOW. “We want to keep it as an asset forever.”

482
Here’s where people who are homeless in New West can enjoy a hot shower and get a comfort kit
466
Luxurious residences are setting a new standard of living in Langley
206
UPDATE: Here's where you could be able to buy cannabis in New West
140
New West now grappling with second big COVID-19 outbreak
66
Canadians are outraged by the new egg patty in Tim Hortons' breakfast sandwiches