Residential resale activity “built on momentum from the summer” with transactions up 24 per cent year over year and average prices on the rise
Oct 15, 2019 11:51 AM By: Joannah Connolly 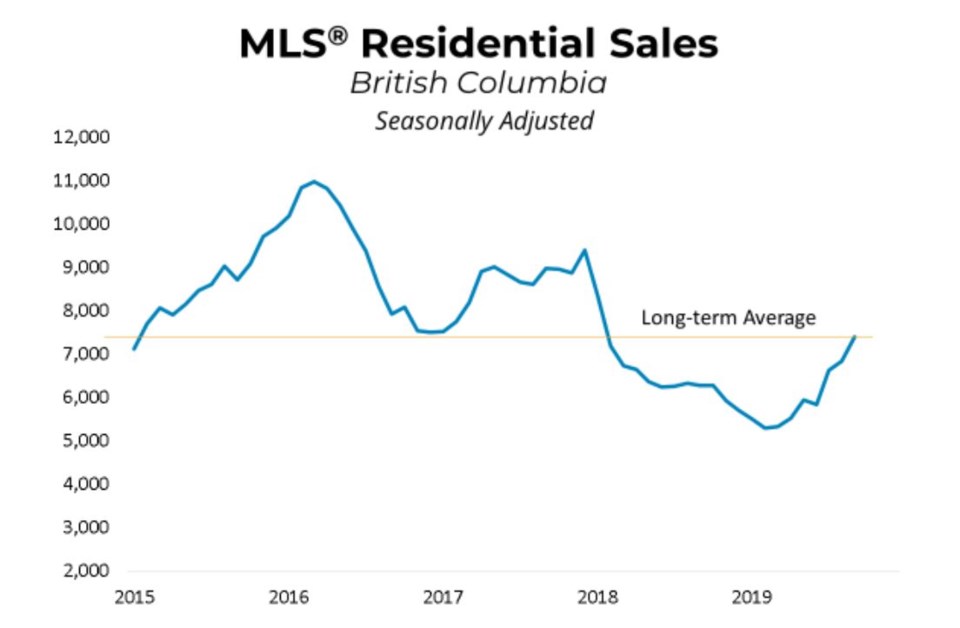 Although residential real estate is seeing a stronger resurgence of activity in Greater Vancouver, the sales uptick is being seen throughout the province, according to the latest monthly data from the B.C. Real Estate Association (BCREA).

There were 6,938 home sales on the MLS across B.C. in September, the BCREA reported October 15, which is an increase of 24 per cent compared with September 2018.

The average home sale price in September was also higher than one year previously, up 2.1 per cent to $697,943, which is 1.8 per cent higher than in August.

However, this doesn’t mean a return to the overheated housing markets of 2016, according to the BCREA.

“Markets across BC built on momentum from the summer,” said Brendon Ogmundson, BCREA’s chief economist. “While the year-over-year increase in provincial sales was quite strong, home sales in most areas are simply returning to historically average levels.” (See graph above.)

The BCREA said in its report that “overall market conditions remained in a balanced range, with a sales-to-active-listings ratio of about 18 per cent.”

Only two of the 12 individual real estate boards across the province failed to record higher sales in September than one year previously. These were the small market of Powell River, where sale and price percentage changes fluctuate greatly each month, and Vancouver Island, which saw 5.1 per cent fewer sales on an annual basis.

Vancouver Island was also one of four boards to record a lower average home sale price than a year ago — down three per cent. The others to see lower average sale prices in September were Greater Vancouver (-5.9 per cent), Victoria (-6 per cent) and Powell River (-0.3 per cent).

In larger markets, an increase in sales coupled with a decline in average sale price could mean that there are increasing numbers of sales at the lower to mid end of the market — perhaps as buyers take advantage of improved affordability and cheaper mortgage rates. A larger number of lower-priced homes being sold will pull down the average sale price; it does not necessarily mean home prices are declining in those markets, although this could also be true.

Even though the province’s sales and price activity over July through September has been relatively strong compared with the previous year, it was not enough to offset the slow sales of the 2019’s first half and it is certainly possible that 2019 will finish behind even the weak showing of 2018.