Sorry, I’m not buying all this sudden love for Judge Begbie

When the Record ’s first story about a motion to remove the Judge Begbie statue from downtown New West got posted on May 3, it was like a bomb going off.
May 11, 2019 9:32 AM By: Chris Campbell 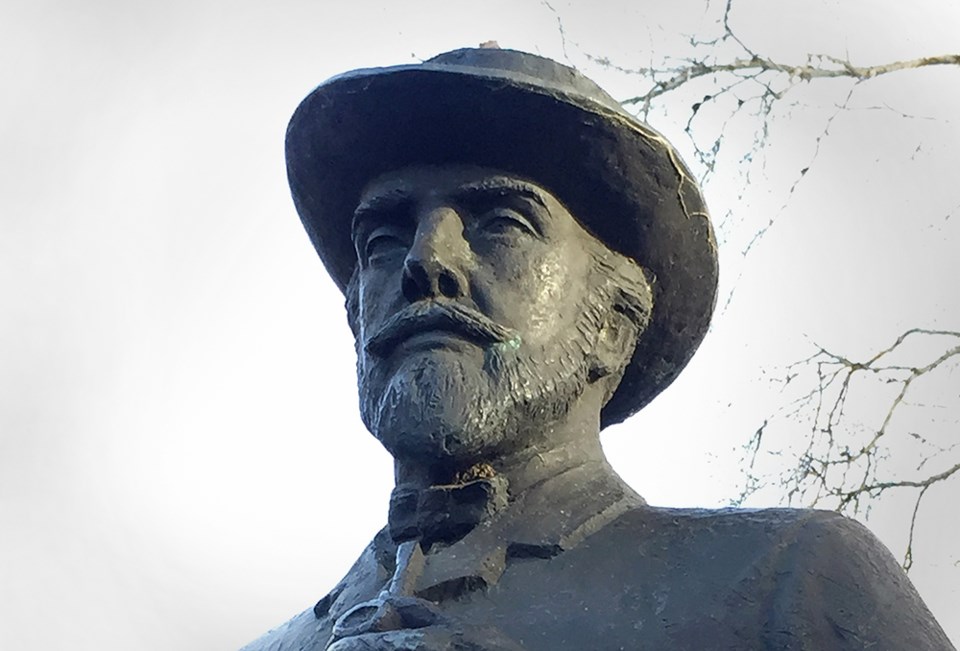 Judge Begbie: Sir Matthew Baillie Begbie a.k.a. the Hanging Judge a.k.a. the hipster of Carnarvon – the first Chief Justice of the Supreme Court of B.C.Cornelia Naylor

When the Record’s first story about a motion to remove the Judge Begbie statue from downtown New West got posted on May 3, it was like a bomb going off.

The motion seemed to come without any warning to many people, although perhaps they just hadn’t been listening to how determined New West council has sounded about truth and reconciliation.

Let me make clear, there were some thoughtful comments about the removal. Many agreed with the decision, while others agreed with the goal of reconciliation, but felt keeping the statue in its spot in front of the courthouse was useful. Some people wanted the statue kept in place, but with an educational plaque about the real history of what happened, or with a statue of Chief Ahan, or a statue with multiple chiefs.

There were some really good ideas shared in a thoughtful manner.

This column is not about those thoughtful comments.

What I’m talking about are the comments I’ve seen on Facebook and in the tsunami of letters to the editor I received in the days since the motion first came to light.

They are from people who suddenly became amateur historians about Judge Matthew Begbie. There were a lot of comments like, “I didn’t know much about him so I did some research” – meaning they googled him and read a Wikipedia page.

Based on this in-depth research, they came up with a remarkably similar conclusion that was repeated in letter after letter.

They basically kept saying that Begbie was “just following the law at the time” as though that wasn’t actually painfully obvious to everyone. These letter writers seemed to think they had come up with some revelation that nobody else knew about. They were cracking the case wide open!

And all of these comments talked about “erasing history” or “rewriting history” – which are patently false arguments and show wilful ignorance about what the New West council motion will actually do.

The statue will end up somewhere else, where the full context of what happened will be associated with it. The full story will be told.

The motion means the city will also: engage in a conversation with the Tŝilhqot’in Nation about the history and legacy of Judge Begbie and the effects his decisions had on generations of their people; work with the city’s museum and archives, the community and the Tŝilhqot’in Nation to find an appropriate place for the statue; and engage in a process of consultation to find an appropriate place to tell the history of the Chilcotin War.

Meaning the history will actually be told in a complete manner – something that some statue sitting in front of a courthouse just can’t do.

The bigger argument behind removing the statue is really the pain that it causes Indigenous people when they see it in front of a place that is supposed to represent modern justice. It’s why the Law Society of B.C. decided in 2017 to remove Begbie’s statue from its lobby – see, it’s happened before, and please don’t tell me that lawyers are “politically correct” because I will mock you.

It’s the point about the pain caused to Indigenous people that I think is the real reason why many of these letter writers and social media commenters – from such places as Vancouver Island and the Prairies – have suddenly felt so compelled to write about their new buddy, Judge Begbie.

I think that at the root of it is latent racism. Their hatred of Indigenous people runs deep and if they can keep a statue that causes great pain where it is, then they will fight to do that. They can’t stand that the Tŝilhqot’in Nation has asked for this and that New West council is respecting that request.

I’m just not buying that protecting Judge Begbie’s reputation is really what this is about.

Yeah, it’s just my opinion, but it’s based on lots of evidence.

Since taking over the Record and the Burnaby NOW, I’ve seen several campaigns being waged on certain topics, such as refugees, the Burnaby South byelection involving Jagmeet Singh, and now Judge Begbie.

The letters flow in from across Canada and sound almost like they’ve been written based on a script.

It feels almost like an organized campaign and all three issues, of course, involve race. It’s not hard to connect the dots.

So I’m calling BS about all this sudden love for Judge Begbie. He was a man with a complicated history. I don’t believe he was some sort of monster. But his story and, more importantly, the story of the Tŝilhqot’in Nation, will be told in a better way thanks to this motion.

2466
Luxurious residences are setting a new standard of living in Langley
310
New West now grappling with second big COVID-19 outbreak
251
Opinion: This protest in front of NWSS against an affordable housing project is ridiculous
219
New West rapid access clinic opens as 'safe way to get sober'
204
UPDATE: Here's where you could be able to buy cannabis in New West