Dear Mr. Trump: Letter of thanks from a Canadian feminist 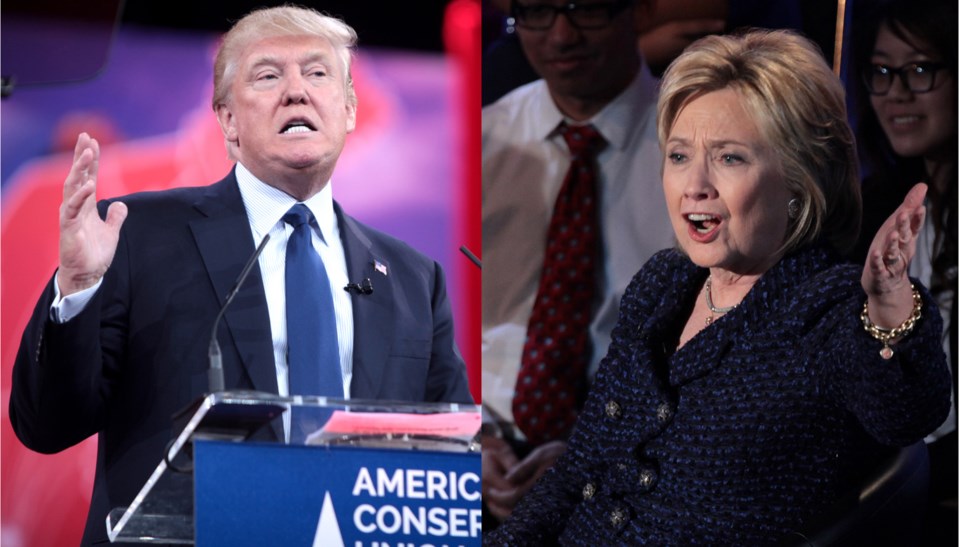 The Trump-Clinton campaign will go down in the history books as a black eye on America.Gage Skidmore, Krassotkin/Wikimedia Commons

Today I must extend my personal thanks to you.

Yes, you read that right. I need to thank you, dearest Donald, for making it so blindingly obvious that sexism and misogyny still reign supreme – not only in the shining example of your own repugnant personality but in the broader societal reaction to this entire presidential campaign.

Let’s just get a few facts out of the way first, so that we’re on the same page here.

Fact: If Clinton’s main rival in the Democratic primaries had been a woman, people (including you) would have patted her patronizingly on the head and told her to take her sweet, feminine, socialist little daydreams back to the living room to play with her children. A woman presenting herself as a Sanders-style “liberal” would never have been taken seriously.

Fact: If your genders were reversed, there isn’t a human being alive who would try to defend the female equivalent of you, dear Donald, as a candidate. Actually, she’d never have even gotten to be a candidate because people would have dismissed her as a loudmouthed, unattractive, obnoxious boor – qualities that will automatically disqualify a woman from candidacy, though evidently not so yourself.

Fact: If this were a man-versus-man campaign, the one intelligent, highly qualified, well-spoken and high-achieving candidate would be so far out in the lead that you would be but a distant memory, the Donald Who? that shows up as a footnote in the back pages of history textbooks.

I could go on. But so much has been written, and so well, on the subject of the influence of sexism on this presidential race that I won’t.

What I will do is return to my opening point: to thank you, dear Mr. Trump. (I use the title “Mr.” loosely, but occasionally I can be polite to assholes who don't deserve it. It’s what we do, as women.)

I need to thank you for making it so clear to me, and to other women of my generation, that the fight we thought we’d fought already isn’t finished. Heck, we thought the fight had been fought by the generation before us and we were just kinda cleaning up the odds and ends, putting the finishing touches on it all.

We were wrong. And now we’re coming out of the woodwork to say so. And this is why I’m grateful to you.

Because my Facebook feed is full of posts from women who are angry. Who are fed up with the way you have acted and the way society has treated Hillary Clinton – and, more broadly, with the way it still treats woman at large. Who are saying this just isn’t good enough – and speaking up about it.

These are women from different generations, different cultural backgrounds, different walks of life, different parts of the globe. Some identify loudly and publicly as feminists; others have probably never used the “f-word” to define themselves, in many cases because they simply didn’t think it was necessary to do so anymore. (Because it’s 2016, after all, and all that’s behind us, right?)

But now they are. And for that I thank you, Donald.

I also have to thank you for your influence on those of your own gender. Because, thanks to you, my Facebook feed is also full of posts from men who are angry. Who see you, this deplorable example of a “man’s man,” and stand up and say, this is so not okay. Who are angry on behalf of their wives, their mothers, their daughters, their co-workers, and who aren’t afraid to say so.

So thanks, Donald, for making us all angry. Because, you know, angry people are people who are inspired to change the status quo. Angry people don’t sit back complacently and think that it’s okay if there are a few jerks out there, because the world is largely a pretty good place and it’s running pretty well and we really don’t have to worry much about it.

Thanks for showing us that we do have to worry. That we have to care. That we have to be passionate about issues such as equality, diversity and inclusion – and that we have to keep speaking up and speaking out till our throats are sore from the speaking, because there are enough uneducated, ill-informed and just plain awful human beings out there that if the rest of us don’t speak up, those people - your people - might start to win.

And God help us all if that happens.

So whether Clinton wins – as she so evidently should – or whether this misogynistic black magic that’s carried you so far already transports you directly into the Oval Office, the world will in the end emerge better for this campaign.

Oh, it will emerge with black eyes and bruises, licking its wounds, because I guarantee you history will not look back on this campaign with kindness. It’s the kind of campaign that will be used in future classrooms and lecture halls to illustrate what the world used to look like, before the inevitable happened and women were at last considered genuinely and absolutely equal to men. It’s the kind of campaign that will embarrass America and Americans on the world stage for decades to come.

But good will come out of it all. Because so many good people are all kinds of angry and they’re just not going to take it anymore.

Angry Americans can take it out on you at the polls, Donald, and I sure as hell hope they do. The rest of us? We’re going to watch, and we’re going to stop being polite about it.

So if you won’t shut up, then we’ll just talk louder. And more of us will raise our voices until there are so many of us that we will drown out your bluster in a roar of womanhood. Of humankind saying: There’s no room in this world for people like you.

And we’ve got two F-words for you, Mr. Trump. Take them both, with our compliments.

623
New West sees big jump in COVID-19 cases
607
Opinion: Now NIMBYs are whining about shadows from new housing
432
Here is how fast COVID-19 can spread after a road trip in B.C. (INFOGRAPHICS)
408
Filming in New West: A bright spot in a challenging year
401
Pfizer temporarily reduces European deliveries of vaccine