Survey finds broad support for requiring proof of COVID-19 vaccination for travel, attendance of public events, working in offices.
May 6, 2021 6:00 AM By: Mario Canseco 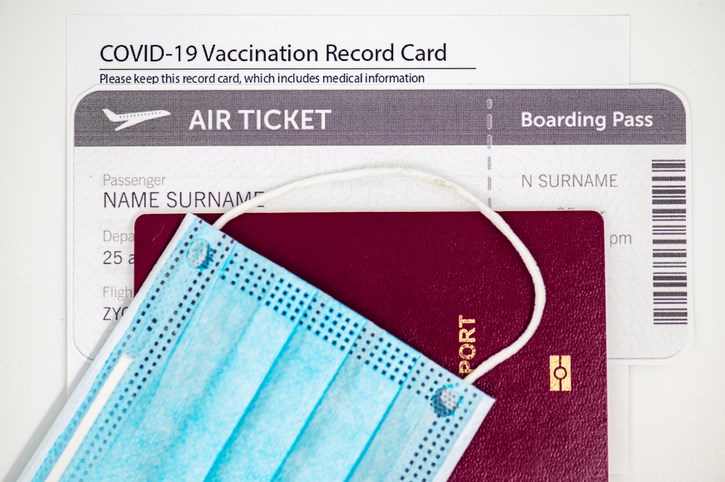 Most Canadians welcome the idea of relying on proof of vaccination against COVID-19 when people are away from their homes.Stefan Cristian Cioata/Moment/Getty Images

Six weeks have gone by since Research Co. and Glacier Media first asked about the concept of “Vaccine Passports.”

At the time, the promise of an earlier return to regular activity seemed feasible, and vaccination efforts across the country appeared to be progressing well.

A lot has changed in the course of those six weeks. Canada has endured delays in the delivery of COVID-19 vaccine doses, partly due to the growth of cases in vaccine-producing countries that now desperately need the shots that had been earmarked for other nations. In addition, the number of daily new cases in some Canadian provinces remains at or close to triple digits.

This month, we reviewed the feelings of Canadians on the notion of issuing “proof of vaccination” certificates for people who have been inoculated against COVID-19. As expected, most of the country’s residents welcome the idea of relying on these documents when people are away from their homes.

Canadians aged 55 and over, many of whom have already been vaccinated, are particularly cheery about the prospect of a summer where trips can be undertaken if inoculation has taken place. Among Canada’s oldest adults, support for vaccine passports climbs markedly in the three types of travel tested: international (74%), interprovincial (66%) and intraprovincial (57%).

The past two weeks have brought controversy over a type of lockdown proposed by the provincial government in Ontario and the idea of road checks in British Columbia. Some observers may have been surprised at the full scope of these decisions. In reality, the public has been on board with the concepts for a while, even if in disarray about enforcement.

Over the past seven months, the level of support expressed by Canadians for establishing a ban on intraprovincial travel has been high: 75% in November 2020, 72% in January 2021 and 66% in March 2021. It is not a surprise, then, to see such a high level of acceptance to the notion of a vaccine passport now.

Still, there are some regional nuances. While majorities of Ontarians (58%), British Columbians (57%) and Quebecers (54%) welcome the idea of vaccine passports for intra-provincial travel, fewer residents of Atlantic Canada (49%), Alberta (also 49%) and Saskatchewan and Manitoba (46%) concur.

Public backing for a vaccine passport geared at intra-provincial travel reaches 63% among Canadians who voted for the Liberal Party in the 2019 federal election. It also boasts majorities of those who cast ballots for the New Democratic Party (NDP) and the Conservative Party in the same democratic contest (55% and 53% respectively).

In these three instances of entertainment, the views of Canadians aged 35 to 54 drift away from the concord observed between their younger and older counterparts. For instance, only 49% of members of generation X think it is wise to require a vaccine passport to go to the movies, compared to 57% among both Canada’s youngest adults and baby boomers.

More than half of Canadians also believe in vaccine passports for people to be able to visit a gym or fitness facility (54%). On this particular activity, Canadians aged 18 to 34 appear to be more lenient (49%), while their older counterparts would like to see tougher regulations.

Finally, 52% of Canadians think it is a good idea to have vaccine passports for people to be able to work at an office. On a regional basis, the acceptance of these workplace guidelines is similar to what we saw on intraprovincial travel. Most Ontarians (56%), British Columbians (52%) and Quebecers (52%) like the idea, while fewer of those who reside in Alberta (49%), Saskatchewan and Manitoba (46%) and Atlantic Canada (42%) share the same view.

As far as the pace of inoculation efforts is concerned, we may not be in the position we imagined just a few weeks ago. Residents of the three most populous provinces, for the most part, have no qualms about the vaccine passport at this stage. We may yet see it as a temporary but necessary requirement: the country is headed towards a couple of months where the inoculated components of our society will be aching to participate in specific activities.

Results are based on an online survey conducted from May 1 to May 3, 2021, among 1,000 adults in Canada. The data has been statistically weighted according to Canadian census figures for age, gender and region in Canada. The margin of error, which measures sample variability, is plus or minus 3.1 percentage points, 19 times out of 20.

Can employers force employees back to the office? Can bosses ask if you got a vaccine?
May 3, 2021 12:18 PM
Comments