Teams on the bubble for the so-called Calgary curling bubble could breathe a little easier Wednesday after Curling Canada expanded the field for its upcoming national championships.
Jan 13, 2021 4:50 PM By: Canadian Press 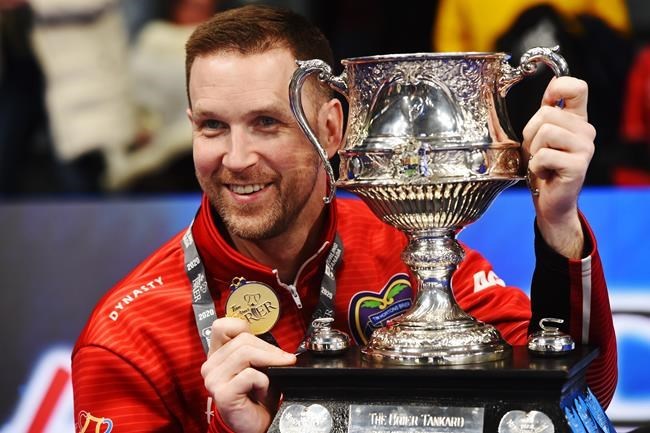 Teams on the bubble for the so-called Calgary curling bubble could breathe a little easier Wednesday after Curling Canada expanded the field for its upcoming national championships.

A maximum of 18 teams will play in the main draw at both the Scotties Tournament of Hearts and the Tim Hortons Brier at the Markin MacPhail Centre. The field will include defending champions, teams from all 14 provincial and territorial associations and three wild-card entries instead of the usual one.

"We feel like we belong and that we were going to be at the nationals," said Colin Hodgson, now a virtual lock to attend with Team Mike McEwen. "It just would have been crushing to not have any opportunity to get ourselves there, no matter how hard we tried."

Curling Canada said that since a number of provincial playdowns were cancelled around the country, several high-performance teams were denied the opportunity to qualify for nationals.

Supplementing the field, the federation said, would "ensure the quality and integrity of the championships."

Until all of the provincial and territorial championships are complete or team representatives are declared, the full wild-card picture will remain somewhat foggy.

The usual Friday night play-in games to determine Team Wild Card were scrapped for this season.

The final Canadian rankings from the 2019-20 season will be used to determine the two teams that would have played in the wild-card game. They will instead get automatic entry in the main draw.

The third team - with entry criteria "to be determined" - will allow for two pools of nine entries apiece.

On the men's side, the Manitoba-based McEwen holds the No. 5 ranking position. Other top teams awaiting final word include No. 4 Brendan Bottcher and No. 6 Kevin Koe, both from Alberta, and No. 9 Glenn Howard of Ontario.

Alberta recently cancelled its championships but is not expected to name its representatives until next week. Bottcher is the reigning provincial champion but Koe did not play down last year since he skipped Team Canada.

The women's wild-card picture is even fuzzier.

Laura Walker (No. 7) is the reigning Alberta champion while No. 2 Tracy Fleury (Manitoba) and No. 6 Kelsey Rocque (Alberta) appear to be slam dunks.

The third spot remains up in the air and could be the toughest call of the bunch. Developments over the next couple weeks should help clear things up.

Suzanne Birt (No. 9) is a heavy favourite to win the Prince Edward Island title, but could be in the wild-card mix with a loss.

Robyn Silvernagle of Saskatchewan — a province still hoping to play its provincials — is ranked 10th but only has two returning players from last season, one short of the required minimum. Chelsea Carey holds the No. 5 spot but is currently a free agent.

"I think there might be a little glimmer of hope there for us for sure," said Silvernagle second Jessie Hunkin. "It's still kind of a wait-and-see game. But I think (more teams) helps with the calibre of the field."

The 3-of-4 returning players rule may not apply to the third wild-card spot since criteria for that entry has not been finalized, which boosts Silvernagle's chances.

It's also possible, though unlikely, that a member association could select its representative based on 2020-21 results rather than last season's play. That could allow a higher-ranked team to potentially take a wild-card spot and boost the number of teams from that province in the competition.

Several provinces and territories are still hoping to hold championships over the next few weeks. Last season's playdown results have been a popular method for determining representatives when cancellations were necessary.

However, it's not necessarily a given that invited teams will choose to compete. Travel restrictions, quarantine rules and work/family arrangements could impact decisions.

For example, Krista McCarville declined her invite from Northern Ontario. Jill Brothers is expected to decide by Thursday after receiving the Nova Scotia invite.

Curling Canada will formally announce the wild-card entries after the member associations determine their entries.

“To be clear, this is a byproduct of the pandemic, and it’s a format change unique to this pandemic-affected season,” said Curling Canada chief executive officer Katherine Henderson. “So much is riding on this Olympic qualifying season, we had to make sure that the fields for both the Scotties Tournament of Hearts and Tim Hortons Brier includes Canada’s top teams.

"With many of them not having the chance to earn their way into these events through the traditional route, we feel this is the best possible way to remedy that issue.”

The winner of the Scotties and the Brier will represent Canada at the world championships later in the season.

A top-six finish at the worlds would secure a berth for Canada at the 2022 Beijing Olympics.

This report by The Canadian Press was first published Jan. 13, 2021.