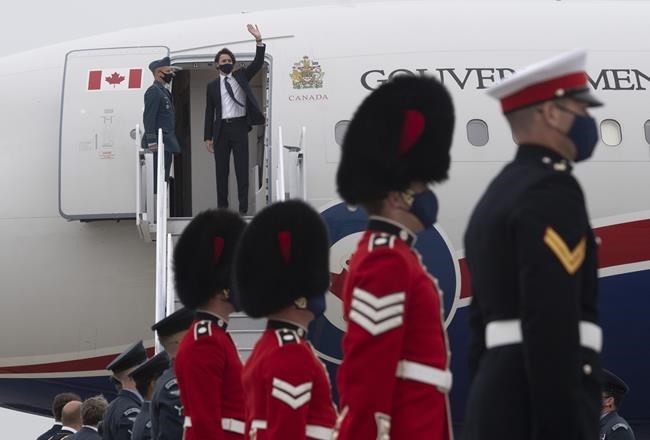 CORNWALL, ENGLAND — Prime Minister Justin Trudeau landed in England on Thursday ahead of a three-day summit with fellow G7 leaders amid growing pressure on Canada to share COVID-19 vaccines with low-income countries.

As Trudeau arrived under grey skies, greeted by a mask-wearing ceremonial guard and local officials, President Joe Biden separately promised the U.S. will donate 500 million doses to speed the end of the global pandemic and said his G7 counterparts will soon announce their own plans.

"We're going to help lead the world out of this pandemic working alongside our global partners," Biden said in England, adding the doses would be shared with "no strings attached."

The U.S. commitment comes on top of 80 million doses Biden has already pledged to share by the end of the month.

Late Thursday, Canada became the only country in the G7 yet to announce plans to share any of its vaccines. That evening, before the summit formally began, the U.K. announced it would donate five million doses in the "coming weeks" to inoculate people living in some of the world's poorest countries, and give away at least 100 million doses within the next year.

In a statement, the British government said "G7 leaders are expected to agree to provide 1 billion doses via dose sharing and financing to end the pandemic in 2022."

A Canadian government official speaking on the condition of anonymity confirmed Canada will be part of that package.

The country has guaranteed delivery of more than 100 million doses for the year when giving the population two doses requires 76 million. It has committed $440 million to help vaccine-sharing initiative COVAX buy doses directly from manufacturers.

France, Germany, Italy and Japan have all committed to provide different amounts of shots to COVAX, which is aimed at ensuring low and middle-income countries have access to inoculations.

Johnson had asked leaders to come to the summit with concrete commitments on how to end the pandemic by the end of 2022. He wrote in The Times of London newspaper that it was now time for wealthy countries to "vaccinate the world."

U.S. officials hope the summit will conclude with a communique showing a commitment from the G7 countries and nations invited to participate to do more to help vaccinate the world and support public health globally.

The trip marks the first time Trudeau has been in another country since early 2020, before the COVID-19 pandemic hit Canada. Among the officials who greeted him in England was Ralph Goodale, a former Liberal cabinet minister who is now Canada's high commissioner to Britain.

He will spend the next few days meeting with world leaders in a village near the English coast for the first in-person gathering of G7 leaders since 2019. From there he will travel to Brussels for a NATO summit, followed by a meeting between Canada and the European Union.

Ending the pandemic, recovering the global economy — including for international travel — and getting vaccines to less wealthy countries dominate the agenda for the G7.

This is also Biden's first trip abroad since being elected to the White House last fall, providing the first chance for him and Trudeau to talk face-to-face since he took office.

New York Rep. Brian Higgins said Thursday the White House has confirmed Biden and Trudeau are set to meet on the margins of the G7 summit, and that they will discuss plans to reopen the Canada-U.S. border. Higgins, one of the most vocal U.S. critics of the ongoing border restrictions, was taking part in a panel discussion on the issue alongside Liberal MP Wayne Easter.

"This is the most exclusive club in the world," said John Kirton, director of the G7 Research Group at the University of Toronto.

"Sometimes it's what I've called the lonely hearts club — or group therapy session. Nobody but the fellow leaders of the most powerful democratic countries in the world governing advanced economies can understand how tough that job is."

Trudeau travels having received one of his two doses of the Oxford-AstraZeneca shot. His office said he will quarantine for up to three days at a hotel in Ottawa when he returns next week.

The G7 includes Canada, the U.S. and United Kingdom, Japan, France, Italy and Germany, as well as the European Union.

Summit observers say Trudeau enters being the leader who has served the second-longest, next only to German Chancellor Angela Merkel.

Heading into the G7, Trudeau's office said besides the pandemic, he will focus on climate change — a major policy plank for his Liberal government — as well as economic growth and co-ordinating approaches to promote gender equality and human rights.

Recently though, Canada has been gripped by an outpouring of grief over the targeted killing of a Muslim family, and a First Nation's discovery of what are believed to be the remains of 215 Indigenous children at a former residential school.

Trudeau spoke at a vigil two days ago in London, Ont., for the Afzaal family. Four members of the family died when a man drove a truck into them while they were out for a walk Sunday evening. A nine-year-old boy survived.

The prime minister called it a terrorist attack.

His Liberal government has also faced questions over its lack of progress on a promise to implement the 94 calls to action from the Truth and Reconciliation Commission into Canada's former residential school system.

As well, Trudeau has been urging Pope Francis to apologize for the Catholic Church's role in operating these facilities, where generations of Indigenous children suffered abuse and isolation from their families and culture.

— With files from James McCarten in Washington, D.C., and The Associated Press

Note to readers: This is a corrected story. A previous version said the United Kingdom would donate at least one million COVID-19 vaccine doses within the next year.