'It was joyous:' Sun returns to some Nunavut communities for first time in weeks

IQALUIT — A sliver of orange rose over Cambridge Bay, Nunavut, earlier this week, tinting the sky pink and the snow a purple hue. The sun washed over the frozen tundra and sparkling sea ice for an hour — and was gone.
Jan 16, 2021 9:18 AM By: Canadian Press 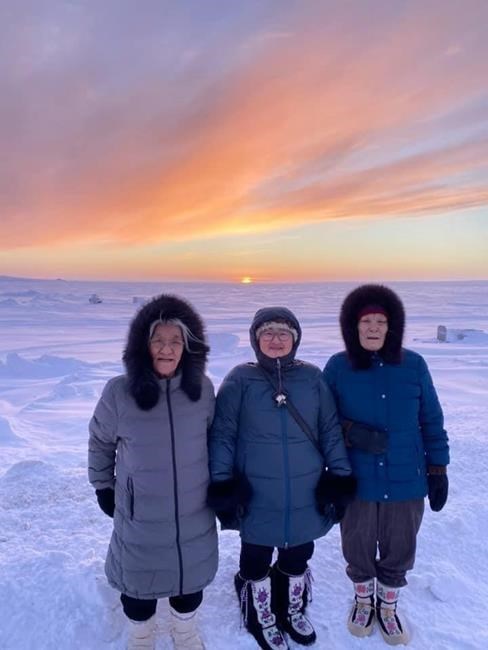 IQALUIT — A sliver of orange rose over Cambridge Bay, Nunavut, earlier this week, tinting the sky pink and the snow a purple hue.

The sun washed over the frozen tundra and sparkling sea ice for an hour — and was gone.

Monday marked the return of the sun in the Arctic community of about 1,700 after six weeks of darkness, but an overcast sky that day meant the light couldn't get through. Pamela Gross, Cambridge Bay's mayor, said the town gathered two days later, on a clear day, to celebrate.

Gross, along with elders and residents, rushed down to the shore as the darkness broke around 10 a.m.

"It was joyous. It's such a special feeling to see it come back," Gross said.

Elders Mary Akariuk Kaotalok and Bessie Pihoak Omilgoetok, both in their 80s, were there. As Omilgoetok saw the sun rise, she was reminded of a tradition her grandparents taught her. Each person takes a drink of water to welcome and honour the sun, then throws the water toward it to ensure it returns the following year.

Gross filled some Styrofoam cups with water and, after taking a sip, tossed the rest at the orange sky behind her.

"I didn’t know about that tradition before. We learned about it through her memory being sparked through watching the sun rise."

Although the sun's return was a happy moment, the past year was especially difficult for the community, Gross said. She wouldn't elaborate.

"Being such a small community, people really know each other, so we feel community tragedies together. There were a few that we’ve gone through this year," she said.

Gross said restrictions on gatherings caused by the COVID-19 pandemic meant losses in the community felt even more heavy.

"It made it extra challenging to be close as a community ... and for your loved ones if they’re going through a hard time."

Getting the sun back helps.

"It's hard mentally to have a lack of sun, but the feeling of not having it for so long and seeing it return is so special. You can tell it uplifts everyone."

The return of the sun is celebrated in communities across Nunavut. Igloolik, off northern Baffin Island, will see the sun return this weekend. But the community of about 1,600 postponed its annual return ceremony to March because of limits on gathering sizes during the pandemic.

In the territory's more northern areas, the sun slips away day by day in the fall, then disappears for months at a time. Grise Fiord, the most northern community in Nunavut, loses sun from November to mid-February. But in the summer, the sun stays up 24 hours a day.

Now that the sun has returned in Cambridge Bay, the community will gain 20 more minutes of light as each day passes.

“The seasons are so drastic. It really gives you a sense of endurance knowing that you can get through challenging times," Gross said.

This report by The Canadian Press was first published Jan. 16, 2021.