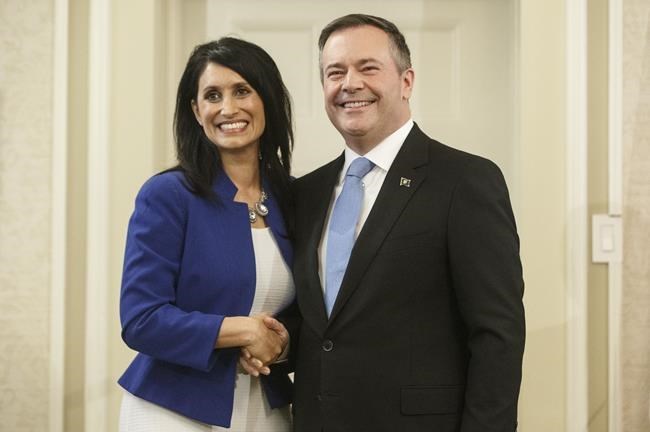 EDMONTON — Alberta’s multiculturalism minister has pushed back against criticism of government silence following a weekend COVID-19 protest that included marchers with torches.

“Right now, I’m actually focused on making sure that junior hockey gets back up on its feet again,” Leela Aheer said initially Monday when asked at a news conference about the march through downtown Edmonton on Saturday.

She then weighed in.

“Obviously, white supremacy and racism is never, ever tolerated in this province, should not be tolerated in this country at all. I think I’ve been very, very clear about that," said Aheer, who was announcing that junior hockey teams can participate in 50-50 prize draws.

“However, racism, white supremacy – any of that – is absolutely, imperatively, absolutely and unequivocally unacceptable at any time.”

Aheer also said she took exception to the question given that she has spoken out against racism in the past.

“I don’t know if you read an article that I wrote about a year and a half ago about white supremacy. I have absolutely been exposed to that in my past,” she said.

“I find this question to be very disingenuous considering my own background, and considering what I have had actually had to put up with in my lifetime when it comes to white supremacy.”

Aheer is of East Asian descent on her father's side.

Premier Jason Kenney followed up Aheer's comment about six hours later with a statement of his own.

"Albertans believe in the dignity of every human being, and have no time for these voices of division and hate, or the symbols that they represent," said Kenney.

"There is no doubt that some people came just to register their opposition to public health measures, which is their democratic right. But these people also have a responsibility to disassociate themselves from the extremists who peddle hatred and division, and who played a role in this event."

The march was part of duelling protests in front of the legislature — one for and one against Alberta’s COVID-19 public-health orders, which ban visitors inside households and restrict outdoor gatherings to no more than 10. Most businesses must operate at reduced capacity.

Edmonton police said four officers were assaulted during the protests and one organizer was arrested for causing a disturbance.

Afterwards, participants against pandemic restrictions, some carrying torches despite warm temperatures, paraded through the downtown on what they called a “walk for freedom.”

“Edmonton unequivocally condemns racism, misogyny and other forms of hate – such speech is not welcome in our community,” wrote Iveson.

Earlier Monday, before Kenney issued his statement, Notley said the United Conservative premier’s silence on racism was out of step with the “vast majority” of Albertans.

“Let’s be perfectly clear: tiki torch or torch rallies are absolutely, historically associated – and everybody knows it – with some of the most heinous examples of racism against racialized citizens across the world,” said Notley.

Notley said she sympathizes with Aheer for having been a past victim of racist attacks, but said as multiculturalism minister, her job is to fight racism.

“You can’t ever stop speaking out against it,” said Notley.

“It infuses communities if it is left unchecked.

“I would take great issue with the idea that saying something once somehow means that you have dispensed with your obligations.

Notley stopped herself, then said: “Well … I would urge her to do it.”

This report by The Canadian Press was first published Feb. 22, 2021.

393
Here’s where people who are homeless in New West can enjoy a hot shower and get a comfort kit
222
Luxurious residences are setting a new standard of living in Langley
202
UPDATE: Here's where you could be able to buy cannabis in New West
97
New West now grappling with second big COVID-19 outbreak
57
Canadians are outraged by the new egg patty in Tim Hortons' breakfast sandwiches