With B.C. movie theatres closed, Rio indie cinema says it will reopen as a sports bar

One of Vancouver's most prominent independent movie houses is rebranding itself as a sports bar in an attempted workaround of the province's COVID-19 health orders.
Jan 20, 2021 3:59 PM By: Canadian Press 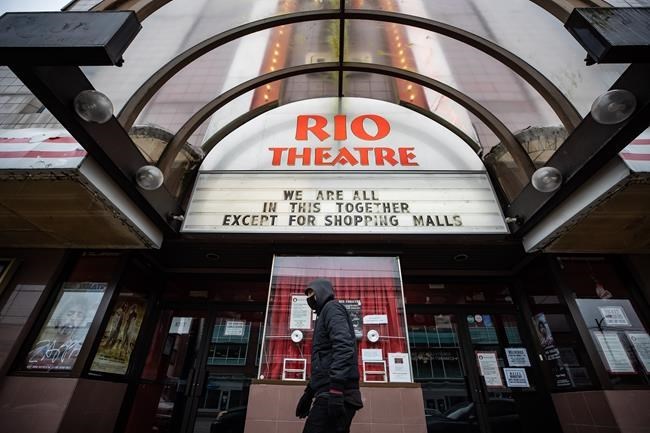 One of Vancouver's most prominent independent movie houses is rebranding itself as a sports bar in an attempted workaround of the province's COVID-19 health orders.

Rio Theatre owner Corinne Lea says as of Saturday, the cinema will pivot to operating as a bar that projects sporting events on the big screen.

It's part of a move that would comply with British Columbia's guidelines that say restaurants and bars are fine to stay open, but movie theatres aren't.

"We're trying to point out how these rules don't make any sense," Lea said on Wednesday.

"But at the same time, there's nothing we can do ... except try to figure out how we can keep the doors open."

The province's cinemas were forced to close in November and won't be allowed to reopen until at least early next month.

Lea said she hasn't heard from health authorities, but her goal is to "work within the rules" and get her business back on its feet in the sporting world.

"We're all having to pivot and become jocks," she said.

"All my film geek programmers were trying to Google the NHL and understand what sports are playing when."

A statement from B.C.'s Health Ministry confirmed that under COVID-19 orders, the Rio could "likely ... operate as a restaurant or bar," as long as it meets safety conditions, such as capacity limitations.

"We want to recognize the work of the arts and culture sector who have worked hard to find new ways to reinvent themselves during the pandemic," the statement said.

Operators of the Rio have been frequent critics of provincial health officer Dr. Bonnie Henry's guidelines for local businesses, which Lea said have been "increasingly frustrating" because of their inconsistencies.

For instance, gyms and bowling alleys are allowed to stay open with certain restrictions, while cinemas weren't granted the same exceptions.

Over the Christmas holiday, the Rio used its theatre marquee to question the province's approach to safety, pointing out that while theatres were closed, malls were still allowed to operate.

The Rio holds a "liquor primary" licence, Lea said, which allows the theatre to operate as a bar, and a limited food licence to serve popcorn, grilled cheese and other snacks.

The Rio isn't the first Vancouver movie house to experiment with a different business model. Last month, the city's Hollywood Theatre reopened as a bar, serving cocktails and snacks, but not showing films.

Other indie theatres across the country have taken less bold routes to survival after being forced to close under their local health guidelines.

Some continued to operate concession stands or sell alcohol, while the owners of Ottawa's ByTowne Cinema chose to permanently close in December rather than face an uncertain future.

This report by The Canadian Press was first published Jan. 20, 2021.